When Jesus Takes a Walk

The summer Sunday gospel readings annually are full of Jesus’ greatest hits–this year is no exception. This Sunday’s reading contains John’s account of two of Jesus’ most notable miracles–feeding the five thousand and walking on water. The feeding of the five thousand is the only pre-resurrection miracle that is recorded in all four of the canonical gospels; Jesus walking on the Sea of Galilee is in all of the gospels except Luke (maybe Luke wasn’t there?). What makes the walking on water scene even more fascinating is that the three gospel accounts are very, very different. 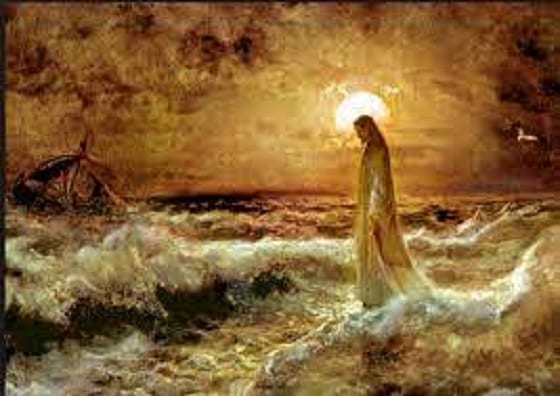 I often get the opportunity to play theologian in the interdisciplinary program I am part of every year. In the first semester of the course, during “New Testament week,” I spend some time walking students through how the New Testament canon evolved over two or three centuries. Of the four canonical gospels, Mark is the earliest (around 65-70 CE), with Matthew and Luke coming along fifteen years or so later. It is clear from the texts that both Matthew and Luke used Mark as the spine of their own gospels, adding in various sayings of Jesus that scholars attribute to another early (undiscovered) source called “Q,” as well as other additional material.

To illustrate, I use a couple of comparative texts from Mark and Matthew, including the story of Jesus walking on the water from today’s gospel. Mark’s account is, as usual, straightforward, unvarnished, and open-ended in its implications.

Mark 6:45-52: When it was evening, the boat was far out on the sea and he was alone on shore. Then he saw that they were tossed about while rowing, for the wind was against them. About the fourth watch of the night, he came towards them walking on the sea. He meant to pass by them. But when they saw him walking on the sea, they thought it was a ghost and cried out. They had all seen him and were terrified. But at once he spoke with them, “Take courage, it is I, do not be afraid!” He got into the boat with them and the wind died down. They were completely astounded. They had not understood the incident of the loaves. On the contrary, their hearts were hardened.

As is often the case in Mark’s accounts, the disciples are unsure of what they are dealing with. They are still reeling from last week’s miracle—feeding the 5000 with five loaves and two fish—and now the guy walks on water and calms the storm. “Their hearts were hardened” is not so much a description of disbelief as of total disorientation and confusion.

Matthew’s account of the same event is so similar to Mark’s account at the beginning that Matthew would be accused of plagiarism if he was a contemporary academic.

Matthew 14:22-33: When it was evening, he was there alone. Meanwhile the boat, already a few miles offshore, was being tossed about by the waves, for the wind was against it. During the fourth watch of the night, he came toward them, walking on the sea. When the disciples saw him walking on the sea they were terrified. “It is a ghost,” they said, and they cried out in fear. At once Jesus spoke to them, “Take courage, it is I; do not be afraid.”

After the storm calms down as in Mark’s account, Matthew adds a new twist that is central to most retellings of the miracle.

Peter answered him, “Lord, if it is you, command me to come to you on the water.” He said, “come.” So Peter got out of the boat, started walking on the water, and came toward Jesus. But when he noticed the strong wind, he became frightened, and beginning to sink, he cried out, “Lord, save me!” Immediately Jesus stretched out his hand and caught him, and said to him, “O you of little faith, why did you doubt?” After they got into the boat, the wind died down. Those who were in the boat did him homage, saying, “Truly, you are the Son of God.”

Now wait a minute. Peter gets out of the boat and walks on the water, and Mark didn’t include it in his gospel? That seems like a kind of big thing to neglect or forget, doesn’t it? But even more important is Matthew’s account of how the disciples reacted to all of this. Mark’s disciples are afraid, astounded, clueless, and hard of heart. Matthew’s disciples are afraid at first, but after everything is over, they get it. They recognize who Jesus is and worship him.

As an aside, John’s account of this same event–on tap this coming Sunday–is much more like Mark’s than Matthew’s account. John says nothing about Peter’s joining Jesus out on the lake. To add to the confusion, John’s gospel is the last of the four to be written, as much as three or four decades after Mark’s and a couple of decades after Matthew’s.

So, what “really” happened? Did Peter walk on the water or not? Were the disciples’ hearts hardened or did they kneel down and worship Jesus? I have no idea, of course, and neither do you. Assuming that these gospels were written by the men whose names they bear, Mark was not even one of the original twelve disciples. Everything he reports is second-hand at best. Matthew was one of the twelve, but he’s writing as much as forty or fifty years after the fact as an older man. Our uncertainty about “what actually happened” is no different than similar uncertainty about any events that occurred before the advent of cameras, videotaping, and so on.

It’s worth remembering that, despite the protestations of many of its worshippers, the Bible was not written for us. The Bible is a library of various books written over many centuries, books originally intended for very specific audiences in very specific social and historical circumstances. One way of engaging with the differences between Mark’s and Matthew’s versions of Jesus walking on the water is to imagine what sorts of people or communities each version reflects.

Mark’s gospel, the earliest of the four gospels, frequently describes the uncertainty and disorientation of those who engaged with and followed Jesus. Sometimes Mark’s Jesus expresses uncertainty about who he is and what his mission is supposed to accomplish. The disciples in Mark’s account, just as undoubtedly many early followers of Jesus in the next generation after he was gone, knew that there was something unusual and special going on, but were not yet prepared to put a name to it.

By the time Matthew’s gospel is written fifteen or more years after Mark’s, there is clearly a confidence about who Jesus was and what he was about that is missing in earlier accounts. Matthew’s disciples are more definitive about Jesus’ identity than Mark’s, because collective decisions about who Jesus was have become more and more definitive and central in early Christian communities in the intervening years.

This should not be of the slightest concern to even the most conservative, Bible-centered person of Christian faith. We all know that faith evolves and grows over time, accounting for increased experiences and maturity. If your faith is the same now as it was when you first became a person of faith, you have chosen to remain in the nursery or kindergarten of faith. In the end, the details of what happened during the storm on that lake almost 2000 years ago are irrelevant. What matters is what people of faith do with the stories over the succeeding generations. That is what makes such stories continually and eternally new.

July 22, 2021
A Philosopher Who Happens to Be a Christian
Next Post

A night with Lot in Sodom,...
slacktivist
Books by This Author Books by Vance G. Morgan