It’s Blessing of the Animals Sunday . . . but who is really getting the blessing?

It’s Blessing of the Animals Sunday . . . but who is really getting the blessing? October 4, 2020 vancemorgan 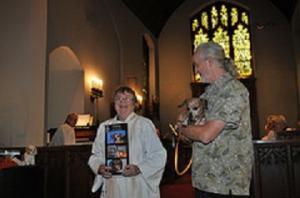 Animals have been a part of my life for as long as I can remember; many posts on this blog over the years have been dedicated to the roles that various animals have played in my life and spiritual development. Search for “Frieda,” “Bean,” “Winnie,” or “Stokeley” in the right-hand column, and you’ll find these essays. Jeanne and I often say that if it wasn’t for dogs and God, we would have nothing to talk about. Today I’m thinking particularly about how the animals in our lives bless us far more than we bless them.

During my teaching career, I have developed dozens of strategies for getting students to participate in class discussions; the most reliable technique undoubtedly is to get them talking about their pets. For instance, in my ethics classes we regularly consider an article by biologist Frans de Waal; his decades of studying chimpanzee behavior have convinced him that we can learn a lot about the foundations of the moral life—a life often considered to be exclusively available to human beings—from observing non-human primates. Although 99.8% of our DNA is identical to that of chimpanzees, we tend to be exceptionalist about the moral life—only human beings are capable of it.

Yet de Waal points out that features fundamental to the moral life, including empathy, deference to the needs of others, cooperation, deliberation, and more are frequently on display in chimpanzee interactions. He expresses one of his conclusions by asking

Would it be realistic to ask people to be considerate of others if we had not already a natural inclination to do so? . . . [Humans] started out with moral sentiments and intuitions, which is also where we find the greatest continuity with other primates. Rather than having developed morality from scratch, we received a huge helping hand from our background as social animals.

There is, for instance, the dog who is not allowed to lay on the living room furniture. She is perfectly obedient concerning this prohibition until she thinks everyone is upstairs. When she believes she is not being observed, she jumps on the nearest piece of furniture—but was eventually caught by the nanny cam. This, I told my students, is a canine version of Gyges and the ring of invisibility story from Plato’s Republic—how differently would you act from your law- and moral-rules-abiding norms if you thought no one was watching?

Then there is the dog who chooses which human family member to sit with while watching television according to which one of them took him for a walk that day. He chooses not to sit with the most recent walk companion, since the dog apparently wants to make sure that everyone in the family gets equal snout time with him.

Every dog owner believes that their dog is capable of high-level thought, but has also had the experience, as Daniel Dennett describes it, “of looking deeply into your dog’s eyes and realizing that no one is home.” Although dog-lovers don’t want to hear it, it is possible that the majority of our examples of canine intelligence on display are actually cases of humans anthropomorphically projecting intelligence where it doesn’t really belong. When my dog acts in a manner that, if I acted that way, would be explained by my ability to deliberate and think, I assume that she must be thinking when she acts that way.

But biologists and animal behaviorists tell us that apparently intelligent behavior can almost always be explained without assuming any high-level thought being involved at all. It’s sort of like Darwin telling us that the apparent design of our world can be explained by natural processes without referring to an overall designer. Some of us don’t want to hear it—but that doesn’t make it any less true.

Still, Franz de Waal isn’t claiming that non-human animals use high-order reasoning when they behave in ways that reflect moral sensibilities. His claim, rather, is that their moral behavior comes from their ability to feel—to empathize, care about things other than themselves, even to sacrifice their own interests in deference to the interests or needs of others. It is this capacity to feel—an ability that we share with our animal brothers and sisters—that arguably serves as the foundation of moral behavior, whether the animal in question is capable of high-order reasoning or not.

When I ask my students for examples of canine empathy rather than rationality, there once again is never a shortage of stories. Many of the stories are strikingly similar to what Jeanne and I have observed over the past several years in our three-dog pack at home. Our dachshund Frieda, for instance, behaved in an obviously empathetic manner when someone in the house, dog or human, was in distress.

Several years ago, my youngest son Justin was diagnosed with cancer (fortunately he has been cancer-free now for a few years). When he returned from radiation sessions, he would collapse in exhaustion on his bed or on the couch. Frieda, who under normal circumstances couldn’t be bothered to give Justin the time of day, would immediately burrow herself next to him so he could absorb her warmth and positive vibes. Frieda acted similarly when Jeanne was recovering from hip-replacement surgery, as well as when I broke my leg in a bicycling mishap. Frieda, who under normal circumstances was all about herself and manipulating others to her will, became an ambassador of empathy and caring when someone was in need.

But just as with human beings, not all dogs are created equal with it comes to the empathy scale. Once Jeanne and I were walking Frieda with our other dachshund, Winnie, when, a couple of blocks from home, I tripped on an uneven portion of the sidewalk and fell flat on my face. Literally—my forehead bounced off the pavement. Frieda’s reaction was, on the one hand, to stick her face in front of mine, lick me, and sit next to me as I woozily tried to get up. Winnie, on the other hand, said “I’m outta here!” and galloped the two or three blocks home as fast as her three-inch legs could carry her. It was the difference between “Dad! Are you all right???” and “Every man for himself!!”—just as we find in the human world.

I usually have to call an end to pet stories in class or we would never have get anything else done. I then ask my students to consider which is more important to the moral life: Reason or sentiments? Our ability to think or our ability to feel? After some discussion in small groups they invariably report back, predictably, that both are important—but if forced to choose between reason and sentiment as more important, feelings win out.

Although this flies in the face of some of the most powerful and influential moral theories ever proposed by philosophers (Immanuel Kant, for instance), it squares well both with what some other philosophers have thought (David Hume, for instance) and—more importantly—with our experiences and intuitions. Our shared evolutionary history with other animals laid the foundations for our complex and sophisticated moral capacities. When we want to see where morality comes from, we need only observe our canine family members. It turns out that someone is home after all. 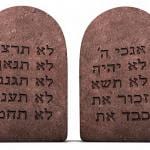 October 6, 2020 On Earth, as it is in Heaven: Why Faith is Always Political
Recent Comments
0 | Leave a Comment
Browse Our Archives
get the latest from
Freelance Christianity
Sign up for our newsletter
POPULAR AT PATHEOS Progressive Christian
1