We don’t shy away from combat

We don’t shy away from combat September 21, 2018 Freedom From Religion Foundation

Patheos Explore the world's faith through different perspectives on religion and spirituality! Patheos has the views of the prevalent religions and spiritualities of the world.
The Freedom From Religion Foundation doesn’t shy away from combat — as this week proved yet again.

With an awesome legal scholar on our side
In an important legal fight, we have on our side one of the foremost legal scholars in the country. We will be represented by Berkeley Law School Dean Erwin Chemerinsky in opposing a request by Morris County in New Jersey asking the U.S. Supreme Court to overturn FFRF’s resounding victory this spring against taxpayer subsidy of churches. With such allies, our spirit is bolstered. “We’re confident that the U.S. Supreme Court will either deny review or will accept the case only to clarify that the New Jersey Supreme Court got the case exactly right,” comments our Co-President Dan Barker. 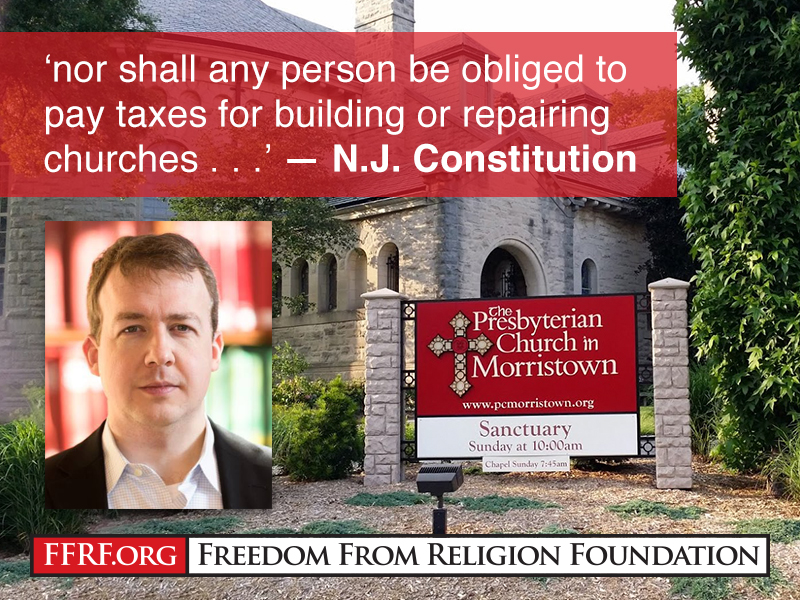 In another significant ongoing court case, we redoubled our efforts to halt a West Virginia city council from unconstitutionally praying at every meeting by asking for an immediate injunction.

The Parkersburg City Council “has adopted the Lord’s Prayer as an official prayer through repeated recitations in unison at bimonthly meetings for years,” the FFRF brief points out. “This level of government interaction between religion and government is a flagrant violation of religious establishment under the First Amendment.” 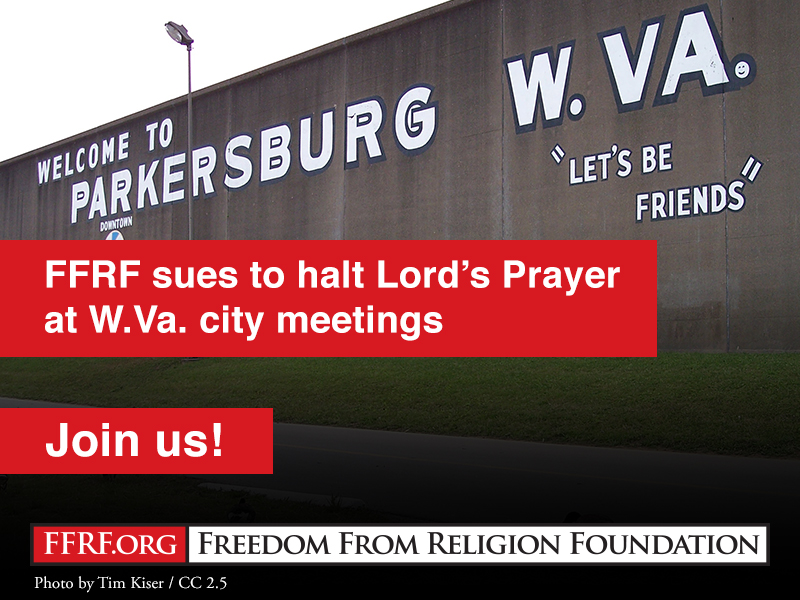 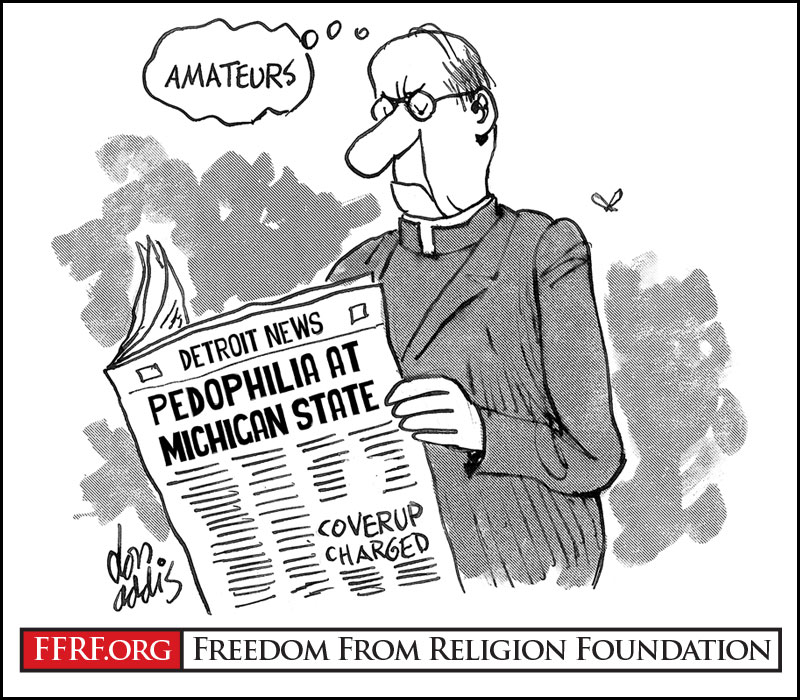 Tackling another religious “icon”
And since we’re asking for an investigation into the Catholic Church, why stop there? We called on the IRS to probe another religious “icon” for campaign law violations. President Trump’s “spiritual adviser” Paula White recently joined two Texas pastors in endorsing GOP candidates for office, a breach of Johnson Amendment regulations that forbid nonprofits (including churches) and their officers from engaging in partisan political activity. Trump has repeatedly lied, saying the Johnson Amendment has been repealed and so churches can endorse from the pulpit. “The conspiracy between Trump and the Religious Right to deceive Americans is both immoral and illegal,” FFRF Co-President Annie Laurie Gaylor remarked.

Naming names
We grappled with some (relatively) small fry, too, calling out a Tennessee state senator and congressional candidate for his ridiculous religion-based opposition to government social programs. Mark Green’s comments clearly indicate that he is violating the spirit of both the U.S. and Tennessee constitutions, we remarked.

And while we’re naming names, how can we ignore the biggest name of them all: Brett Kavanaugh? We sent out a nationwide alert asking all of you to contact your senators (especially senators on the Judiciary Committee) imploring them to delay the confirmation vote in light of the sexual assault allegation and other concerns against Kavanaugh.

On our radio show this week, in addition to discussing the Kavanaugh charges (and the Morris County and Paula White episodes), Dan and Annie Laurie interviewed Cornell scholar R. Laurence Moore about a wonderful new book he has co-authored: Godless Citizens in a Godly Republic: Atheists in American Public Life. 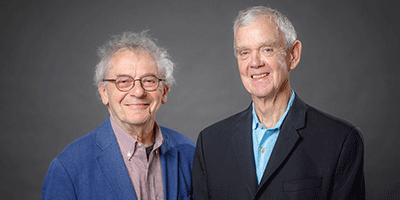 Focusing on the global
We applauded a renewed bipartisan effort  in the U.S. Senate to repeal blasphemy laws worldwide and asked for your help in getting it passed. “Blasphemy is a victimless crime, but blasphemy laws create many innocent victims,” Annie Laurie observed. 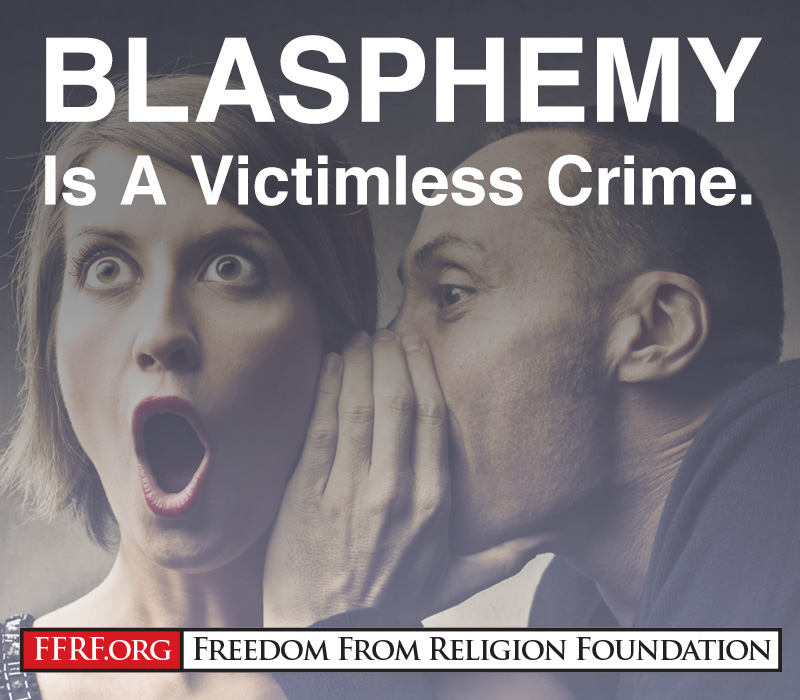 The local, too
Not everything we dealt with this week was so broad. In Austin, Texas, we protested when a school allowed a student to biblically decorate her parking spot while denying a ying-yang pattern and a “too Muslim-looking” design. And we asked officials to cease imposing religious proselytizing on a high school football team in Georgia.

Watch our TV show!
Our “Freethought Matters” TV show is going strong. In eight major cities nationwide this weekend, our talk show features an interview with evolutionist and author Jerry Coyne. Check out the timings for your area and watch the show! This Sunday at 11 p.m., in the Madison area on Channel 3, Dan and Annie Laurie interview on the show Jerry DeWitt, a former Pentecostal minister turned atheist crusader. 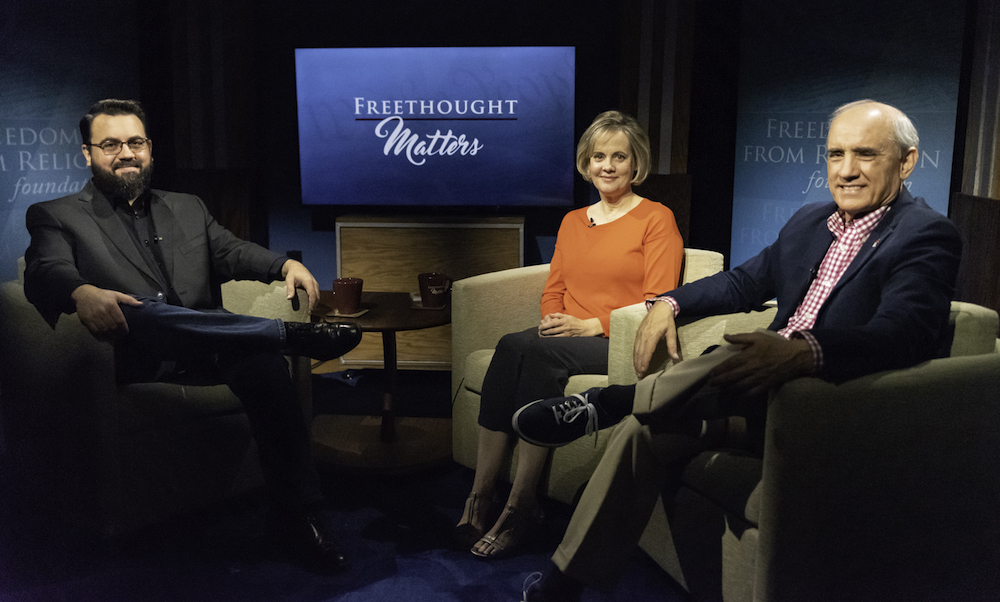 So, there you have it. We’re ready to enter the arena when we have to — on behalf of the Constitution and due to your support. 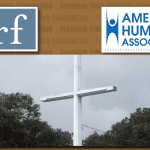 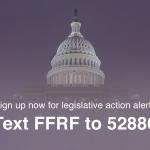 September 28, 2018 Kavanaugh, Roy Moore, Ted Cruz — and so much more
Recent Comments
0 | Leave a Comment
"Sure. Throwing money at bad behavior just ensures that bad behavior continues. Like subsidizing electric ..."
Person223 The Supreme Court, the pandemic, abortion ..."
"More than 12,400 American churches took in billions of taxpayer dollars under the pandemic relief ..."
Jim Jones The Supreme Court, the pandemic, abortion ..."
"I'll tell everyone here a little secret. Purpose Driven Life is an exercise in christian ..."
ephemerol | Freedom From Religion Foundation
"I think the main issue with with religious people not getting how secular people find ..."
swbarnes2 | Freedom From Religion Foundation
Browse Our Archives
get the latest from
Freethought Now!
Sign up for our newsletter
POPULAR AT PATHEOS Nonreligious
1