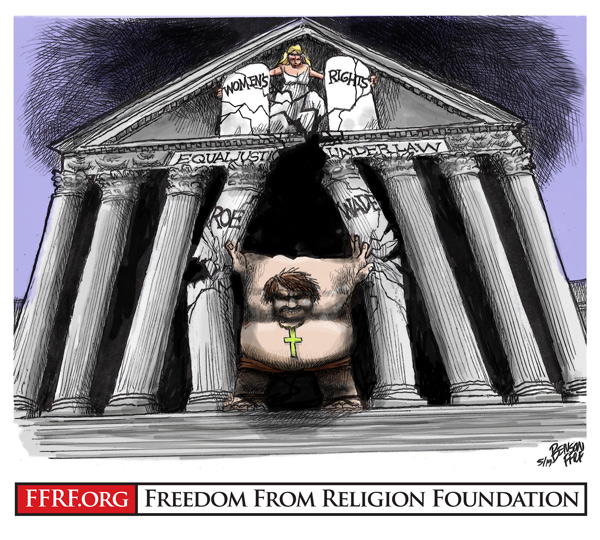 Here at FFRF, we’ve been as dismayed as anyone over the bad week for women’s health issues.

Numerous bills in several states have gone from bad to worse, most notably Alabama, where the female governor, Kay Ivey, on Wednesday signed the most restrictive abortion law in the country. “To the bill’s many supporters, this legislation stands as a powerful testament to Alabamians’ deeply held belief that every life is precious and that every life is a sacred gift from God,” she said in a statement. Ugh.

But we won’t let this get us down and it only strengthens our resolve.

Our ad on national TV!
Here’s a reminder to watch FFRF’s newest television ad featuring Steven Pinker this Sunday on “CBS Sunday Morning.” (It sure beats going to church!) The endorsement ad featuring this leading intellectual and author will also be aired again next Sunday (May 26) in the same time slot. 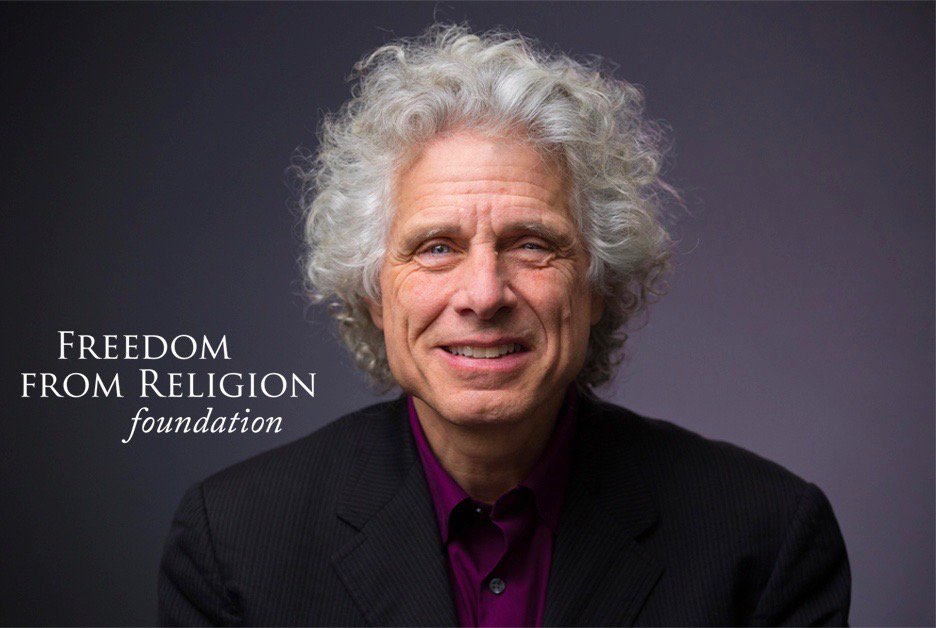 A friend on the Hill!
For the first time, FFRF will be represented on Capitol Hill by our very own director of governmental affairs, Mark Dann. 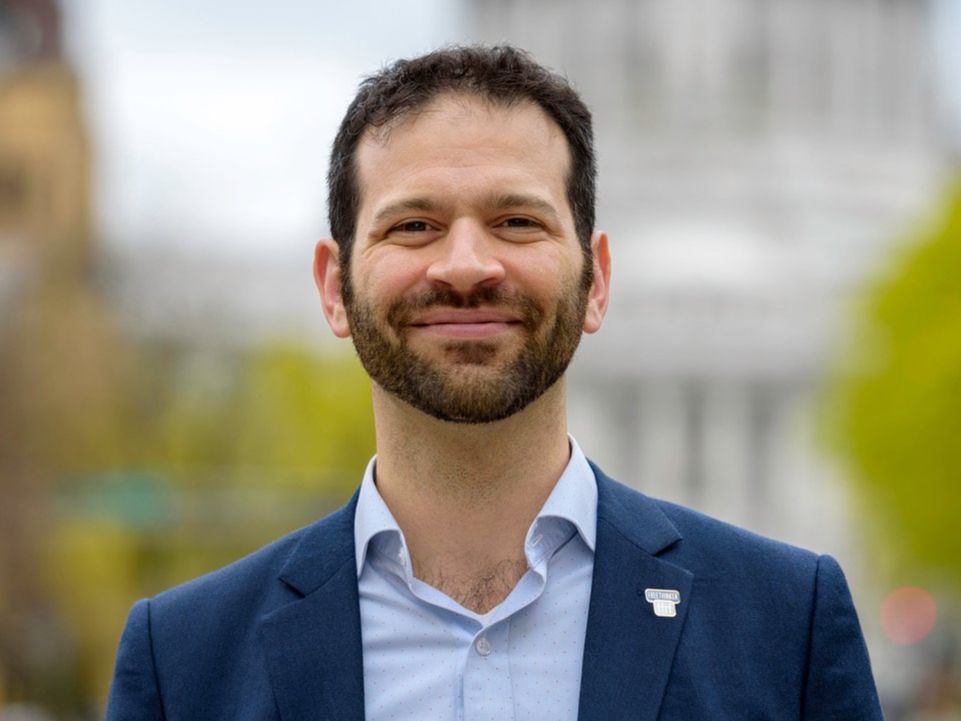 He will officially join FFRF’s staff on Monday as its first full-time director of governmental affairs. He previously worked as the director of governmental affairs for the Secular Coalition for America (SCA), of which FFRF is a member. Dann’s move will raise the national profile of FFRF in Washington, D.C., where he will be based. Mark will help shape FFRF’s government relations policy to uphold the separation of church and state and the rights of nontheistic Americans.

A win in the schools!
We were able to persuade a Wisconsin school district to revamp its field trip form that included religious wording. In the form needed for Dodgeland Middle School’s field trip to Washington, D.C., in mid-April, the only rule written in bold, italicized and all caps text stated, “REMEMBER AT ALL TIMES, AND IN ALL PLACES THAT YOU ARE REPRESENTING OUR GOD AND SAVIOR . . .”  Both students and parents reportedly were required to sign this document.

The district pledged to FFRF that a principal or an associate principal will review such documents from now on. It has also promised to draw up a new form that will not have any religious references.

So help me God? No more!
FFRF applauds the great policy change by the U.S. House to drop “So help me God” from witness oath-taking. As House Judiciary Committee Chair Jerrold Nadler has refreshingly stated: “We do not have religious tests.”

That is a lesson the U.S. ambassador to Israel needs to be reminded about. On Tuesday, David M. Friedman, speaking in Jerusalem, disturbingly pronounced: “Israel is on the side of God, and we don’t underestimate that.”

“I think God belongs in religious institutions: in temple, in church, in cathedral, in mosque — but not in Congress,” says U.S. Rep. Steve Cohen of Tennessee, the chair of the Judiciary Committee’s Subcommittee on the Constitution, Civil Rights and Civil Liberties.

Rule of law undermined!
On Monday, the conservative bloc of the Supreme Court threw out 40 years of precedent, casting aside settled case law, which portends a willingness to overturn other major precedent, such as Roe v. Wade. FFRF came out with a statement disparaging the decision.

“Justice Stephen Breyer warned our country that this decision is a precursor,” FFRF writes in its statement. “‘The majority has surrendered to the temptation to overrule Hall [the earlier case] even though it is a well-reasoned decision that has caused no serious practical problems in the four decades since we decided it. Today’s decision can only cause one to wonder which cases the court will overrule next.’

“Breyer is clearly referring to Roe v. Wade, which legalized abortion. Women’s rights, contraception rights, abortion rights, the right to choose — the conservative bloc is gunning for them.” 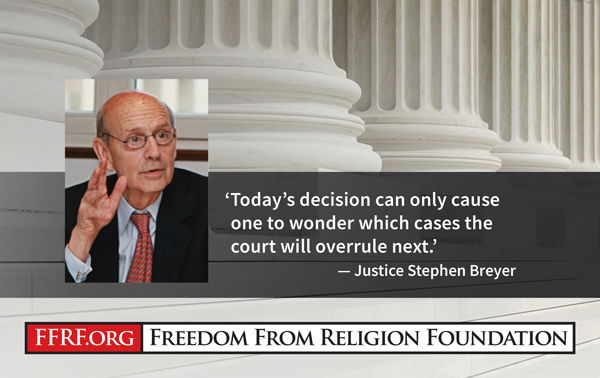 FFRF’s Director of Strategic Response Andrew L. Seidel discusses this topic on this week’s FFRF Newsbite on YouTube. Check it out. Women’s rights in grave peril!
As mentioned earlier, Alabama’s anti-abortion governor, citing her belief in God, this week signed into law a ban on abortion, with the intent to set the stage for a showdown at the U.S. Supreme Court.

FFRF sent out a statement: “While Alabama’s blatantly unconstitutional law will likely end up going nowhere legally, it’s part of an organized campaign to pass as many state restrictions against abortion as possible. The Religious Right’s avowed goal in flooding the court system with anti-abortion legislation is to get a case before the Supreme Court to eventually overturn Roe v. Wade.”

Get involved!
We also were busy trying to get our members in various states (and nationwide) to contact their representatives in Congress.

Book it!
Local FFRF members in the Madison, Wis., area gathered at Freethought Hall on Thursday to hear Andrew L. Seidel speak about and autograph copies of his new book, The Founding Myth: Why Christian Nationalism is Un-American. Order the book here.

Listen up!
On Freethought Radio this week, we spoke with author, activist and award-winning journalist Janet Heimlich about her book Breaking Their Will: Shedding Light on Religious Child Maltreatment, and about the horrific abuse at a Christian Texas ranch for at-risk children occurring over many decades. 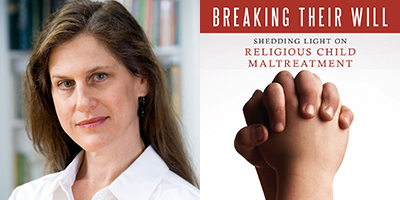 Watch this!
And this week on our TV program “Freethought Matters,” FFRF Co-Presidents Dan Barker and Annie Laurie Gaylor talk with Jerry DeWitt, author of the book Hope After Faith: An Ex-Pastor’s Journey from Belief to Atheism, which tells the riveting story of losing his faith while in the pulpit, then losing almost everything else after his community turned on him.

For all we do, it’s only because of the dedication of supportive members like you. 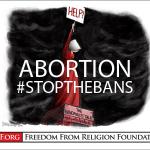 May 24, 2019 We’re fighting religious nationalism — at home and abroad
Recent Comments
0 | Leave a Comment
Browse Our Archives
Follow Us!