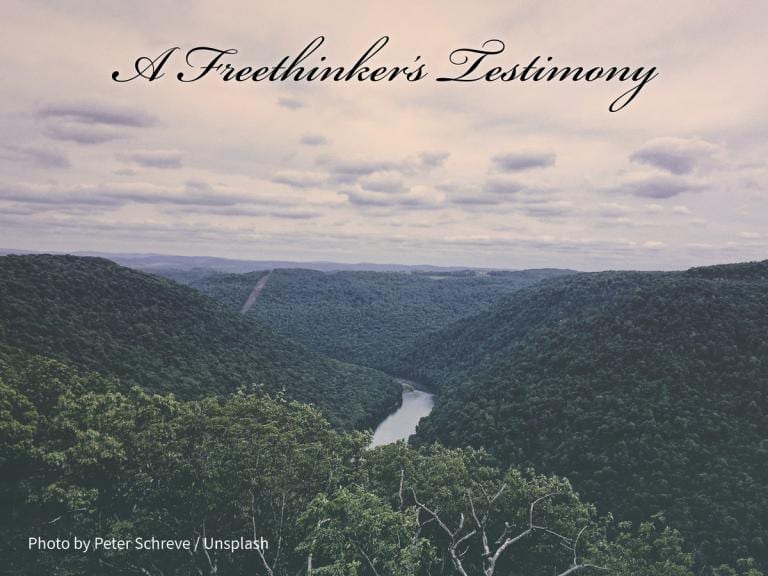 Just because you grow up in the Bible Belt (I was born in a West Virginia farm town with no electricity) doesn’t automatically mean that you’re a fundamentalist. My family never went to church. Most people I knew laughed at “holy rollers.”

I wandered into adulthood and, rather by accident, became a reporter at the Charleston Gazette. The staff contained a few Catholics, but most of the rest were heathens like me. Our city editor was an H.L. Mencken clone who ridiculed redneck religion and wrote brilliant columns lampooning hillbilly preachers.

One day, he told me: “Haught, we want you to be our religion columnist.” I responded, “But I haven’t been to church in 20 years.” He replied, “Fine — that means you’ll be objective.”

So I started attending churches and reporting my impressions in a Monday column. I covered everything from a national Episcopal bishop assembly to rattler-waving serpent-handler services — and from Ph.D. theologian lectures to a “spiritualist” church receiving messages from the dead. I heard thousands babble “the unknown tongue.” (Once, believe it or not, I took Harvard theologian Harvey Cox to a snake-handler church in the hills. When the worshippers began “dancing in the spirit,” Cox jumped up and joined the hoofing. Honest to God.)

I covered evangelist Tiz Jones, who secretly burgled homes in towns visited by his revival, until he was caught and sent to prison. I recall a brawl among rural Baptists who fell into doctrinal dispute and attacked each other with “seng hoes,” mountain implements used to dig ginseng.

Once, I wrote a sneering account of a faith-healer who claimed that he raised the dead. He sent 40 of his followers to storm our newsroom. Luckily, I was out. The night city editor called for burly printers to back the mob out the door.

I watched religious history being made in the 1974 Charleston uprising against “godless textbooks.” When our county school system adopted new books, a born-again board member and evangelists declared that the texts were un-Christian. (The texts looked just like ordinary schoolbooks to me.) Mobs filled the streets. Schools were dynamited. Two people were shot. School buses were hit by bullets. A fundamentalist boycott left classrooms half-empty. The Ku Klux Klan and California porn-fighter Robert Dornan came to Charleston to oppose the evil books. Evangelists beat up elected members at a school board meeting. The madness finally ended after a preacher and a couple of his followers were sent to prison.

Well, my years of covering Bible Belt religion hardened my youthful skepticism into militant agnosticism. I came to feel that every supernatural claim — from papal bulls and ayatollah fatwas to astrology horoscopes and tarot card readings — is mumbo-jumbo. There’s no tangible evidence for any mystical, magical, miraculous malarkey. I joined the Unitarian Universalist Church and allied myself with its toughest doubters.

I was relieved when I was taken off the religion beat at the newspaper and reassigned to investigating corruption. I had felt dishonest reporting stuff I deemed a fantasy. Eventually, I won several national awards as investigator, and became the paper’s editor.

But my disdain for supernaturalism didn’t fade. I felt compelled to tell the world that believing in gods, devils, heavens, hells, angels, demons, miracles, saviors, salvation and all the rest is chasing a will-o’-the-wisp. Invisible spirits are imaginary, as far as an honest observer can tell. They’re a universal delusion. So I wrote several books and dozens of magazine pieces pushing this message.

As you may guess, it was a bit precarious for a crusading agnostic to run a newspaper in the heart of the Bible Belt. I didn’t hide my beliefs; my books were reviewed in the paper. There was no fundamentalist outcry. But I tried not to flaunt my skepticism before churchgoing readers. Endlessly in editorials, I attacked religious attempts to ban abortion, to censor movies and magazines, to halt sex education, to outlaw stripper clubs, to distribute bibles in schools, to restore the death penalty, to teach children creationism, to provide tax-paid vouchers for church schools — but I did it in purely secular language.

A subsequent Gazette religion reporter was a gentle man of the Jewish persuasion who bent over backward to be fair to every belief. When I told him he was covering a zoo of make-believe, he just grinned.

This column is adapted and updated from a piece in the Spring 1999 issue of Religion in the News.

September 18, 2020
The Constitution, polling, schools and archbishops
Next Post 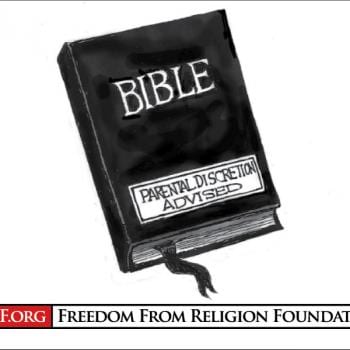