An awful anti-abortion legislation — and its religious roots

An awful anti-abortion legislation — and its religious roots July 6, 2020 Freedom From Religion Foundation 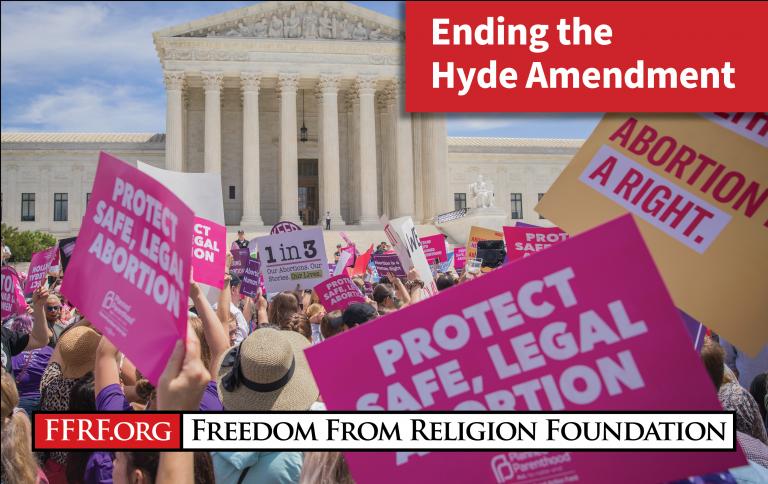 “I believe in a merciful God, I believe in a just God, and I would be terrified at the thought of having to explain at the final judgment why I stood unmoved while Herod’s slaughter of the innocents was being reenacted here in my own country.”

These words, spoken by Rep. Henry J. Hyde on Sept. 19, 1996, reveal Hyde’s religious mindset propelling his legislation that has greatly curtailed abortion access in the United States for almost half a century.

Hyde, a Republican representative from Illinois, was a member of Congress for 32 years, serving on the Judiciary Committee and chairing the International Relations Committee. While Hyde worked across the political aisle on some issues, he was uncompromising when it came to abortion. In fact, Hyde’s Catholic convictions made him instrumental in implementing perhaps the most horrifically consequential anti-abortion legislation in the United States. Part of the motivation seems to have been that Hyde was afraid of going to hell.

“The greatest sadness of my political life is how the Catholics in the Democratic Party have abandoned the cause of life. Don’t they care about what happens to them in eternity?”

Henry Hyde was born in Chicago in 1924. A devout Roman Catholic, he received his bachelor’s from Georgetown University, the oldest Catholic university in the United States, and his Juris Doctorate from Loyola University Law School in Chicago, which was founded in 1909 by the Roman Catholic order Society of Jesus. Hyde became a member of the House of Representatives in 1975 and continued to serve until 2007. However, his most notable piece of legislation occurred within his freshman year when he introduced the aptly-named Hyde Amendment.

The Hyde Amendment restricts federal funding for abortion, rendering women on Medicaid ineligible for abortion coverage even if the abortion is recommended by a doctor or if the pregnancy compromises the woman’s health. The amendment has also expanded to federal programs beyond Medicaid, ending abortion coverage in federal worker health plans, for women in federal prisons, the military, the Peace Corps volunteers, in the Children’s Health Insurance Program, and international family planning programs that use non-U.S. funds to perform or advocate for abortion. Additionally, it applies to Indian Health Services program, so Native American women are ineligible for subsidized abortion care.

The premise of the Hyde Amendment is that taxpayer dollars shouldn’t fund abortions. And yet, the public cost of prenatal care, delivery services, and welfare totals four to five times the amount saved by not paying for Medicaid abortions. Nearly two-thirds of enrollees in Medicaid are women of reproductive age. Under the Hyde Amendment, states are prohibited from using federal funds to cover an abortion, except in cases of life endangerment, incest or rape. (It wasn’t until 1993 that rape and incest were added as exceptions — and these exceptions are rarely availed of.) Only 16 states use their own funds to provide abortion care, which means that your access to abortion care is contingent on the state in which you reside.

“I certainly would like to prevent, if I could legally, anybody having an abortion — a rich woman, a middle-class woman or a poor woman. Unfortunately, the only vehicle available is the … Medicaid bill.”

Indeed, low-income women on Medicaid are disproportionately impacted by the Hyde Amendment, since they are forced to pay out-of-pocket for abortion care. For example, a woman whose income is at the Medicaid level of eligibility would have to shell out nearly one-third of her entire family income for one month to cover a first-trimester abortion.

So the Hyde Amendment delays care while women seek financial resources, meaning that there is a greater chance that women will need an abortion in the second trimester, when abortion procedures cost more. For example, after Mississippi imposed a mandatory waiting period, the proportion of abortions performed after the first trimester increased by 40 percent. The Hyde Amendment has also compelled many women who are unable to find financial help to continue unwanted pregnancies, a blatant disregard for women’s bodily autonomy.

The Hyde Amendment also discriminates against women of color, women with disabilities and low-income women. As social and economic inequalities have coerced 31 percent of Black women and 27 percent of Latinx women to use Medicaid, compared to 15 percent of white women, women of color are more likely to pay exorbitant out-of-pocket costs for an abortion. In fact, more than half of the 7.5 million women of reproductive age with Medicaid coverage in states that do not cover abortion care were women of color.

Furthermore, women who are enrolled in Medicaid programs for physical, developmental and behavioral disabilities are also denied reproductive autonomy. In 2015, 643,000 women of reproductive age were enrolled in both Medicare and Medicaid because they are low-income and living with a disability. The Hyde Amendment restricts women on these crucial programs from receiving affordable abortion health care.

Thus the Hyde Amendment has undoubtedly forced millions of women already faced with discrimination and other challenges to continue unwanted pregnancies, even though childbirth is vastly more dangerous than terminating a pregnancy. Abortion is an extremely safe and effective medical procedure. In fact, a 2018 study by the National Academies of Sciences, Engineering, and Medicine found that medical abortions have a success rate of 95 to 98 percent, with major complications accounting for less than 1 percent. It is 14 times riskier to continue a pregnancy.

By creating a tiered system, the Hyde Amendment determines who can receive timely abortion care and who cannot based on one’s state and socioeconomic status.

“Henry Hyde was an example of a Catholic layman who took seriously the lay vocation to transform the world. He worked to defend the human lives of children before and after birth.” — Bishop Thomas Wenski of Orlando

Before Henry Hyde died in 2007, President George W. Bush awarded the Congressman with the Presidential Medal of Freedom for being “a powerful defender of life.” And 13 years after his passing, the Hyde Amendment is, unfortunately, still in existence. As a “rider” to an annual Health and Human Services Appropriations Bill, the Hyde Amendment requires Congress to renew it each year. And it has been renewed without hesitation, regardless of which party has controlled Congress. For example, pro-choice President Obama signed in 2010 an executive order making certain that the Affordable Care Act would continue to ban the use of federal funds on abortion.

To be sure, there have been vocal opponents to the Hyde Amendment. In 1977, when Hyde proclaimed that pro-choice advocates “worked to save whales, dolphins, and bald eagles and also advocated ‘the calculated killing of innocent, inconvenient human beings,’” legislators like Rep. Elizabeth Holtzman of New York declared the Hyde Amendment to be a form of discrimination and “morally [and] constitutionally repugnant.” Rep. David R. Obey of Wisconsin asked, “where have those voices been on votes to increase appropriations for family planning . . .for day care centers? . . .  When it comes to questions of hunger?”

Nevertheless, the Hyde Amendment passed and was reaffirmed in 1980, when the Supreme Court determined that states participating in Medicaid were not required to fund abortions and that the Hyde Amendment did not violate the Constitution. (President Carter callously commented at the time, “Life is often unfair.”)

Thanks to the work of women of color who launched All* Above All in 2014 to fight for reproductive justice and end the Hyde Amendment, there is finally real conversation about ending these oppressive abortion funding restrictions. All* Above All’s vision is “to restore public insurance coverage so that every woman, however much she makes, can get affordable, safe abortion care when she needs it.” They are doing just that by mobilizing activists to make state and national legislative changes. For example, states like Illinois and Maine are codifying reproductive rights in their laws.

Ironically, another group that supports the abolishment of the Hyde Amendment is Catholics for Choice. The nonprofit wants abortion care to be accessible for all women regardless of income. Sara Hutchison Ratcliffe, domestic program director for the organization, has explained that “we are working to expose [the myth] that bishops represent whatever Catholic opinion in public policy matters. We wanted to make sure everyone from all walks of life are heard.”

“[The Hyde Amendment is] designed to deprive poor and minority women of the constitutional right to choose abortion.” — Justice Thurgood Marshall

Perhaps most notable about Henry Hyde is not that he simply engineered the Hyde Amendment, but that he created a platform persisting for nearly 50 years. Indeed, it is easy to put all the blame on Hyde. But doing so erases the decades of bipartisan support for this oppressive anti-woman piece of legislation. Simply put, abortion rights must never be taken for granted. Abortion rights activists must make their voices known to their elected officials.

If you’d like to do something now to address the injustice created by the Hyde Amendment, please support abortion funds such as the Women’s Medical Fund of Wisconsin, co-founded by Anne Nicol Gaylor, FFRF’s principal founder. Gaylor oversaw this fund as a volunteer from the late 1970s until her death in 2015. The fund annually helps an average of 900-1,000 Wisconsin residents without means exercise their constitutional rights under Roe v. Wade. It is all-volunteer with donations paying for abortion care. Make a donation, deductible for income-tax purposes. 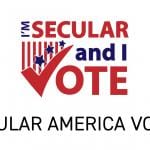 July 2, 2020
Dancing to the Supremes, investigating Trump and celebrating a godless July Fourth
Next Post

July 8, 2020 How can freethinkers lead purpose-driven lives?
Recent Comments
0 | Leave a Comment
Browse Our Archives
get the latest updates from
Freethought Now!
and the Patheos
Nonreligious
Channel
POPULAR AT PATHEOS Nonreligious
1