An open letter to Ralph Drollinger, the pastor who conducts the White House Bible Study

I read the recent BBC story, “Inside the White House Bible Study group,” profiling your ministry with great interest. As you may know, the Freedom From Religion Foundation, which works to keep state and church separate, requested records from every executive branch department involved in this bible study because it is a serious state-church issue. Perhaps you heard about it on Fox News.

You made some interesting admissions during the BBC interview, including: “Drollinger believes the Bible teaches the separation of church and state.” If only. You continued, “I believe in institutional separation, but not influential separation.”

Your ministry is not institutionally separate

I’ll take you at your word for a moment and assume that you want institutional separation. Right now, you’re hosting bible studies in the White House or in offices of other heads of the U.S. executive branch, the U.S. Senate and House of Representatives office buildings, and in many state capitol offices. That is not institutional separation; it is a religious infection in the heart of our republic.

Capitol Ministries has an office suite  in “The Executive Building,” according to Google. Yet you and Capitol Ministries conduct your religious teaching, ceremonies and study on government property. It’s hard to imagine less institutional separation.

If you are serious about state-church separation — and I encourage you wholeheartedly in that pursuit — you should move off government property. To honor the constitutional separation, you need to open a church or host a bible study in your office suite and let government officials come to you. If you really believe what you are selling, an if-you-build-it-they-will-come attitude will suffice.

Location is everything in real estate, but it’s only part of the problem here. You are conducting these bible studies on government property, but also on the taxpayer’s dime. These take place during the workday, even though it would be easy enough to schedule them on the weekend or after work hours. Executive branch, Senate and House staff are in the buildings when the studies are taking place. They may be called upon to help in the bible studies. Or perhaps they’re sending out emails or coordinating security, building entry, attendance or coffee and food. They might even feel coerced or pressured by having a religious ministry at their place of work, a government office.

We don’t know. That’s why FFRF has requested records from all the departments involved in the bible study. We requested them last summer and that’s when I went on Fox News to explain the problems.

To date, we haven’t seen a single record and have had to sue Ben Carson’s Housing and Urban Development to get the records without having to pay through the nose for them. Perhaps you could give a lesson on timely responses to FOIA requests? It would almost certainly be more useful and beneficial than your lessons on the bible.

Institutional or influential, your ministry is a problem

These serious problems undercut the imaginary distinction you attempt between an institutional government ministry and a ministry that is influential in the government. The distinction is facile and detached from reality.

Citizens influence their government officials by writing, calling or visiting their offices. It’s often hard, demoralizing work and the dividends are uncertain. You have no education or training in public service, public policy, government or any of the other issues that are critical to running a superpower. You have an arts degree in geography. And yet, you have unprecedented access to the highest levels of government — far more so than any typical citizen. This is not influence, but manipulation detached from any valuable education or expertise.

When you organize weekly revivals, packed with government actors on government property, and tell them that “homosexuality and same-sex ceremonies are illegitimate in God’s eyes,” you are far afield from a constituent influencing his representatives. You are dictating policy —immoral and inequitable policy — to government actors. The article makes this clear:

Drollinger never tells his members how to vote, or which policies to pursue. But he hopes it becomes obvious by teaching them the Bible.

“I will put the blueprint on the engineer’s seat on the train,” he says. “And it will show you the right tracks to the station.”

“But I’m not going to tell you what tracks to take. But you’ve got to be pretty stupid not to follow the blueprint, because it’s there.”

You once bragged about how “Jeff Sessions [will] go out the same day I teach him something and he’ll do it on camera.” You also told the BBC, “Trump’s enacting everything I’ve written.”

You have the power to manipulate government policy to an alarming degree and for no other reason than you claim to be speaking for a god.

Yes, you are a theocrat

You’re propagating a theocracy in a nation where church and state are meant to be separate. Shame on you.

I understand that it excites you to push the policies in your holy book. I understand why you want to meet in government offices and at the White House. I understand why you want to trumpet the political figures who attend your biblical séances. It’s not only prestigious, but probably the only way you’ll get attendance. As the article notes, “Not everyone attends every meeting — they are busy people.” Sure, they’re busy. Church attendance is plummeting in the United States, which has many evangelical voters concerned that they may be losing their stranglehold on the country. They are desperately looking for politicians who will give it back to them.

Few people want to waste their time studying an outdated book. But if there is political pressure or some political benefit to be had, suddenly the calculus changes. Without the government titles and ability to meet on government property, you don’t have much of anything. And that’s why you’re willing to cross that line into theocracy.

But please, stop acting as if you care about keeping state and church separate.

April 9, 2018
Pruitt shows that theocrats are more willing to violate other laws
Next Post 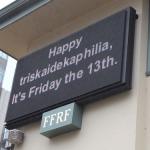 April 13, 2018 Art, activism and Friday the 13th
Recent Comments
0 | Leave a Comment
"Should we expect new translations from the Greek, given this new lexicon?"
epeeist Recovering a secular ancient treasure
"It's a shame that Aristotle was the goto for answers for so many years and ..."
Jim E Jones Recovering a secular ancient treasure
"Science starts with a question, religion starts with an answer."
larry parker There’s no comparison between science and ..."
"Much as I'd love for my discipline to take credit for a lot of this, ..."
axelbeingcivil There’s no comparison between science and ..."
Browse Our Archives
get the latest from
Freethought Now!
Sign up for our newsletter
POPULAR AT PATHEOS Nonreligious
1