An open letter to Sheriff Jolley: taking Harris County, GA back to Jim Crow one sign at time

Many people have reported your new sign to the Freedom From Religion Foundation because we work to keep state and church separate. The sign is problematic on several fronts, threatening, and in poor taste. Essentially, it says, “If you don’t believe what I do, get out of my county.” This is an appalling sentiment, and even more so when it’s coming from someone who has sworn to uphold the Constitution—a document that protects freedom of thought above all else.

In an interview last June, you said of Harris County, “I hope we stay that way,” meaning stay the way things “were 40-50 years ago.” We can only surmise that this sign is an attempt to regain some of the division, discrimination, and hate of that bygone era because it resembles the signs that dotted Georgia’s “Sundown Towns” warning non-whites to get out of town before sunset, or else. Signs that typically read “[Racial slur], DON’T LET THE SUN SET ON YOU HERE.” If your goal is to take your county back to those benighted times, congratulations.

The full text of your deliberately belligerent sign reads:

WARNING: Harris County is politically incorrect. We say: Merry Christmas, God Bless America and In God We Trust. We salute our troops and our flag. If this offends you… LEAVE!

It is you, Sheriff Jolley, who needs the real warning. You have now opened the county to any number of lawsuits, and not just to keep state and church separate: Employment discrimination, civil rights suits, and other suits by minority citizens who have been told by the person they are supposed to call for help that they should get out.

First of all, this is factually wrong. In the interest of truth, you should edit this line of the sign. It is not politically incorrect to agree with positions that the majority of Americans hold. The more appropriate term is pandering. Fear- or hate-mongering would also be appropriate.

Secondly, this has nothing to do with political correctness and everything to do with politics. The sign and its posting to social media is a transparent publicity grab. It’s no coincidence that you have just announced that you are running for a seventh term in the next few months. During the interview in which you made that announcement, you said, with no apparent irony, “we want to treat our citizens not just like we work for them, but we live with them also.” I guess that doesn’t apply to religious minorities and your nonreligious neighbors.

This may come as a surprise, so brace yourself: There is no war on Christmas. It’s a myth, part of the larger “Christians are the persecuted majority in America” myth. However, there is a fight to end Christian privilege. And we in the secular movement are winning. You are just whining.

Irving Berlin, who wrote the song “God Bless America,” was “not a religious person” according to his daughter. Berlin also wrote “White Christmas,” though he and his wife “hated Christmas.”

To Berlin, “God Bless America” “was a populist credo.” It was popular because “the mob is always right.”

You are stoking the passions of the mob by sacrificing a minority—nonbelievers—to the mob’s hate. It’s ironic that you’re doing so by citing a phrase made popular by a member of that same minority. (Read the full story of the songs here.)

Do you and your deputies wear seatbelts? Do your cars have air bags? Have you ever worn a  bullet-proof vest? Do you have health, life, home, or car insurance? Have you been vaccinated? If so, your god is not very trustworthy is he? If he’s no better at protecting you than random chance, what is the point of venerating or praying to him?

The In God We Trust motto, foisted on America during the Civil War (coins) and later the Red Scare of the 1950s (official motto and paper currency), expresses a sentiment that divides America into believers and everyone else. Rather than a unifying motto such as E.  pluribus unum—from many, one—demagogues like you promote a pandering, divisive motto. You are deliberately alienating a voiceless minority, knowing that you can rely on your position of power and as chief law enforcement officer in the county to suppress any complaints from that minority. Shame on you.

You are charged with protecting all citizens. Instead, you have made it clear to 23% of the population that they should not call 911, but should instead “LEAVE!” Harris County.

We salute our troops and our flag.

So do nonreligious Americans. In fact, at FFRF we just installed a two-ton stone monument to the atheists in foxholes who have fought and died for our country, and who you seem to think are unworthy of honor. You’re ignoring the 23.4% of atheist, agnostic, or military personnel having no religious preference (2010 MAAF study based on Department of Defense data). About one quarter of FFRF’s 23,000 members are active duty or retired military.

If  you truly supported the troops, you’d support them all. Not just the troops who happen to believe in the same god that you do.

This can’t be read as anything other than a threat by the chief law enforcement office in Harris County.  First, it’s clear the intent of this sign is to offend, which means that the intent of the sign is also to tell people to leave. You are essentially saying, “If you’re offended, and I’ve just deliberately offended you, get out!”

Why not just shorten the sign to say what you really mean: religious minorities are not welcome in Harris County. Jewish? Get out. Muslim? Get out. Buddhist? Get out. If you don’t believe what I as sheriff declare to be orthodox, get out.

Often at FFRF we are told that if we don’t like god we should move to Iran or another country in the Middle East. The lack of self-awareness in such suggestions is also evident in your sign. By declaring what is orthodox in religion—that your citizens must believe as you do if they wish to stay in the county—you are essentially declaring religious law. This is no different than the theocratic, Islamic regimes. The Syrian refugee crisis is largely due to people fleeing—LEAVING! As you might say—areas controlled by severe, authoritarian religious regimes. A sign like this might be expected in those parts, but not in the United States in 2015, and certainly not erected by the government. 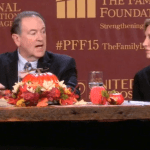 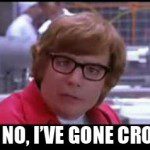 November 30, 2015 Marco Rubio: In conflict with secular law, "God's rules always win"
Recent Comments
0 | Leave a Comment
"As someone Born and Raised in NM, I was floored to learn that other places ..."
C.T. (A.K.A- That Lurker) Luminaria enlightens onlookers about real reason ..."
"> Today, freedom to believe as one wishes is locked securely in the heart of ..."
Jim Jones Many struggles won us our religious ..."
"some people can find a secret message between these to quotes ' 'they can find ..."
Cozmo the Magician The similarities between QAnon and evangelism
"Indeed. Which is what makes it so ironic that conspiracy theories are very effective tools ..."
(((J_Enigma32))) The similarities between QAnon and evangelism
Browse Our Archives
get the latest from
Freethought Now!
Sign up for our newsletter
POPULAR AT PATHEOS Nonreligious
1