The new “Noah’s Ark” could not have been launched without public money. With the Ark Encounter opening in Kentucky today, it is a good time to review the various ways that state and local governments have subsidized the project.

For starters, we know that Ken Ham and his outfit Answers in Genesis (AiG) provided sworn statements that the ark would not have been built in Kentucky without state incentives. AiG claimed in its lawsuit against the state that it chose to build in Northern Kentucky “not only because of its proximity to AiG and the Creation Museum, but also due to the availability of incentives for tourism attractions from the Commonwealth of Kentucky.” In 2011, Ark Encounter entered into in an agreement with the Kentucky Tourism Development Finance Authority (KTDFA) and affirmed that it would not have engaged in the project without receiving state incentives. In its federal complaint, Ark Encounter was explicit:

This provision reflected the reality that AE, LLC would not have pursued the project in Kentucky “but for” the incentives provided by the Commonwealth.

Under the Kentucky Tourism Development (KTD) Act, approved projects are eligible for 25% of their development costs to be repaid through a rebate on the sales taxes the attraction generates over a ten-year period. For the Ark Encounter, that could amount to more than $18 million in sales tax collected by the state and paid back to Ark Encounter.

AiG has often claimed that the incentives are not really tax money since they are in the form of a rebate. Yet, the state certainly considers the money to be a public expenditure. The KTD Act itself, under which funds are awarded says, “The authorities granted by [the KTD Act] are proper governmental and public purposes for which public moneys may be expended.” Most importantly, money that otherwise is collected by the state and reserved for its use will instead be given to Ark Encounter.

State officials began recognizing the problem with subsidizing the project in 2014. By December, the state formally rescinded the incentive grants. In a letter to AiG’s attorney, the Secretary of the Kentucky Tourism, Arts and Heritage Cabinet said:

[I]t is readily apparent that the project has evolved from a tourism attraction to an extension of AIG’s ministry that will no longer permit the Commonwealth to grant the project tourism development incentives.

This was based on the discriminatory hiring policies of Ark Encounter and on the basis that “it is a violation of the Constitution for the Commonwealth’s incentives to be used to advance religion.”

In job postings for Ark Encounter, AiG was asking applicants direct religious questions and grilling them about bizarre fundamentalist creationist positions. For example, not only did one job application ask for “Salvation testimony” and a “Creation belief statement,” but it also included these questions about heaven:

Here is another question about Hell:

There were questions about dinosaurs and race:

Kentucky rightly rejected providing incentive grants to this discriminatory employer. One of the premises of the grants in the first place is that they would provide employment opportunities to state residents. Instead, the incentives for Ark Encounter are aiding discriminatory hiring that only favors fundamentalist Christians.

Ark Encounter and AiG sued to continue to be able to discriminate and receive state incentive grants.

Unfortunately, U.S. District Judge Gregory Van Tatenhove ruled earlier this year that Ark Encounter was likely to prevail in its case and issued a preliminary injunction against the state. Gov. Matt Bevin, who was elected last year after the grants had been rescinded (and was not aligned with the previous administration on this issue), said that he would not appeal. The lawsuit concluded on May 10 when Bevin agreed to a final court order that does not allow Kentucky to exclude the Ark Encounter from tourism incentives based on its religious aspects or based upon “its desire to utilize any exception under Title VII of the Civil Rights Act of 1964 for which it qualifies concerning its hiring of personnel.” That means the state will make sales tax refund payments to Ark Encounter despite its avowed discriminatory practices.

After Ark Encounter had difficulty raising money to build the ark, it turned to the local government. The city of Williamstown assisted by issuing $62 million in municipal bonds for investors to purchase. Williamstown and Grant County also created a special Tax Incremental Financing (TIF) District for the project to help repay the bonds. (For further discussion on the TIF, see Tracey Moody’s discussion here).

The TIF also creates a 2 percent assessment on gross wages on employees who work within the district, which will go to repay the bonds. Let’s say you work in housekeeping at the Ark and make $10 per hour. You are really making $9.80 as your wages are being taxed to pay back the investors who bought junk bonds to build the ark, just as Jesus would have wanted.

Finally, in a blatant violation of the U.S. Constitution, the Grant County Industrial Development Authority gave Ark Encounter $175,000 for land purchases, as well as a 98-acre parcel of land. These government grants did not even come with the veneer of being part of a “this is not public money” shell game. A government agency made direct payments to a religious entity.

It was disturbingly fitting that Kentucky Lt. Gov. Jenean Hampton was present at the Ark Encounter ribbon cutting this week. She was representing the state and made sure to let the crowd know that “We are so blessed that this great, great, attraction was built here in Kentucky.”

If anyone asks Ham what floats his boat, his proper response should be: “public subsidies.” 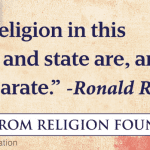 July 1, 2016
Special Weekly Report: We work on many levels
Next Post 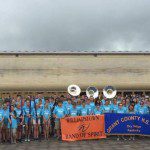