As coronavirus spreads, the futility of religion becomes obvious

Wash your hands or say a prayer? Social distancing or Sunday mass? Cancel public events or give out coronavirus communion wafers to the credulous?

Many believers face these choices as the coronavirus spreads. There is no religious response to the pandemic, unless we count abandoning religious rules in favor of science and medicine. Faced with these choices, most people accept that religion is pointless, at best, and harmful, at worst. Most are making decisions that appear to be motivated by science and medicine, not scripture and sacred doctrine.

And this is different.

We’re not in the aftermath of a catastrophe or thinking about the best way to prevent some hypothetical tragedy — we are in the middle of an outbreak, a pandemic. In the wake of tragedy, we at FFRF often get complaints about government officials using government power to push people to religion or prayer. This may simply be a misguided attempt to assuage societal sorrow or it may be a deliberate attempt to prey on the unfortunate. Both are plausible, neither is permissible. But what is interesting is that, so far, we are not seeing that as a response to the ongoing coronavirus outbreak. In fact, while FFRF reliably gets state-church complaints after a front-page tragedy, we’ve had none about responses to the coronavirus.

So far, we’ve had no reports of teachers telling kids “this is in God’s hands” or that the virus “is God’s wrath” (which some clergy are now preaching). So far, we’ve had no complaints about coaches or principals telling students to pray to end the outbreak. Not even local government officials touting the efficacy of thoughts and prayers as a response, at least not yet. Hell, even Missouri Attorney General Eric Schmitt — over whom FFRF triumphed during his wrongheaded defense of public school football coaches holding religious “chapel” services for players before and after football games — just sued televangelist Jim Bakker for selling snake oil in the form of a “miracle” “silver solution” that Bakker claimed would cure not just “all venereal diseases” (one wonders what Bakker’s pious audience gets up to that it needs this particular panacea), but also the coronavirus.

In perhaps the most telling response, even churches are getting in on the science. Catholic churches are draining holy water and shuttering after infected priests passed out slices of their savior’s flesh. Catholic schools are closing. Not just mainline churches but fringe churches are also shutting down. Even — and this is the most telling of all and a glorious admission —  faith-healing congregations are halting programming. Just three months ago, Bethel Church in Northern California promised to raise 2-year-old Olive from the dead. Now, it’s refusing to visit hospitals to pray for and prey on the sick.

There are, of course, exceptions to the general observation that people are abandoning harmful and ineffective religious regulations in favor of science and medicine. But the clingers seem to be at the higher, more removed, and dare we say, privileged, levels. The Christian Nationalist Trump administration and its political appointees have bungled the response, suffocated information that might reflect poorly on the White House, and have sought to tout their religion and prayers. But they appear to be the exception to the rule. Vice President Mike Pence is all about the prayer, as we documented last week. As is the pope, who has encouraged priests to visit those infected with the coronavirus and give them communion. Francis won’t be putting his fingers in mouths laden with coronavirus, his lackeys will, and then they’ll move on to another mouth and another. This, in the country with one of the worst outbreaks. Then there’s Joel Osteen, the greedy and shortsighted megapreacher who can’t go two or three weeks without passing the collection plate, even to save the lives of a few of his sheep.

One wannabe Osteen, a right-wing preacher named Jonathan Shuttlesworth, posted a video in which he said churches that heed medical guidance and close are “sissies” and “pansies,” with “no balls” who “got neutered somewhere along the line.”

Right-wing evangelist Jonathan Shuttlesworth has no time for "loser" pastors who are canceling services because of the coronavirus, saying they should instead be holding mass gatherings to demonstrate the power of their faith. pic.twitter.com/XNXJ89AE32

But in between his sips of Acqua Panna, this Patagonia-clad preacher stumbled on the truth when he asked of the basins bereft of holy water: “How holy is the water then? That should be a sign to you that your whole religion’s a fraud. Any faith that doesn’t work in real life is a fake faith. Totally fake.” Even without this refreshing admission, Osteen, Trump, Pence and the pope were already proving the point: Religion has nothing to offer in the face of a pandemic. Instead, we must rely on science and medicine. Wash your hands, work from home, avoid travel and large crowds, don’t hoard supplies: Flatten the curve. 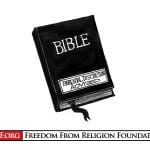 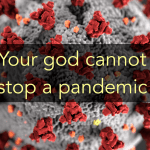 March 13, 2020 Capitol Hill, the Mormon church, the Pentagon — and the coronavirus
Recent Comments
0 | Leave a Comment
"As someone Born and Raised in NM, I was floored to learn that other places ..."
C.T. (A.K.A- That Lurker) Luminaria enlightens onlookers about real reason ..."
"> Today, freedom to believe as one wishes is locked securely in the heart of ..."
Jim Jones Many struggles won us our religious ..."
"some people can find a secret message between these to quotes ' 'they can find ..."
Cozmo the Magician The similarities between QAnon and evangelism
"Indeed. Which is what makes it so ironic that conspiracy theories are very effective tools ..."
(((J_Enigma32))) The similarities between QAnon and evangelism
Browse Our Archives
get the latest from
Freethought Now!
Sign up for our newsletter
POPULAR AT PATHEOS Nonreligious
1