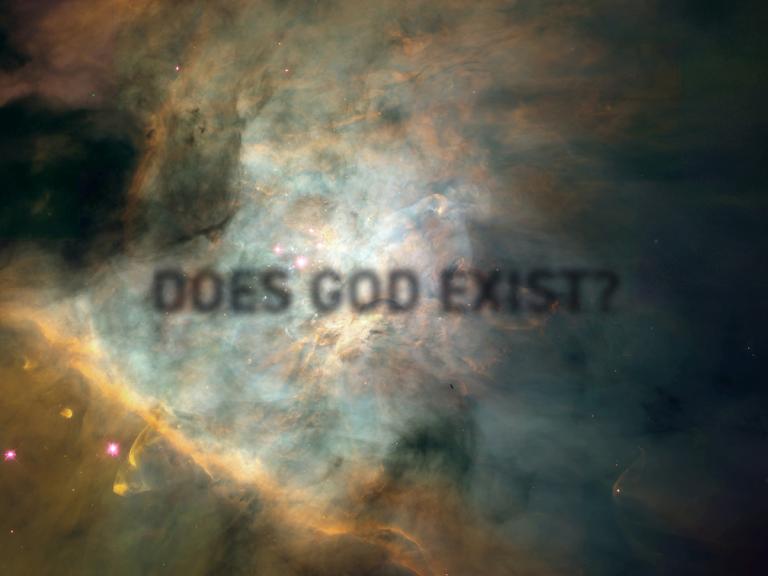 Well, it depends on what you mean by God.

The universe is a maze of mysteries. How can gravity — an invisible, unexplainable force — pull the Milky Way into a spiral? How can atoms contain such awesome power that an amount of matter smaller than a dime produced the energy in the bomb that killed 100,000 Hiroshima residents? How can the double-helix thread of DNA create all living things, from bacteria to trees to Beethoven? Finally, why does anything exist at all?

If you say that the power of gravity, atoms, DNA, lightning and all the rest is God — that God is E=MC2 — then God exists. Those baffling forces are undeniably real.

Or if you say, as some do, that God is the love and pity in every human heart, then God exists. Those feelings are real — just like the paranoid capacity for suspicion, hate, jealousy, anger, and the like.

However, if by God you mean religious deities — the three gods of the Christian Trinity, the millions of gods of Hinduism, the wrathful Jehovah of the Old Testament, the multitudinous Greek and Roman gods, the invisible feathered serpent of the Aztecs — you’ve entered the Twilight Zone.

Human logic can find no trustworthy evidence to prove, or disprove, the existence of unseen spirits. Weeping statues and holy apparitions aren’t reliable proof. So the only truthful answer for an honest person is: I don’t know.

But honest people can go farther and speculate intelligently: Do demons exist? Angels? Leprechauns? Fairies? Vampires? Werewolves? Lack of tangible evidence leads educated people to laugh off these imaginary beings. It’s a small step to apply the same rationale to holy ghosts, resurrected saviors, blessed virgins, patron saints and the like. You can’t prove they aren’t hovering invisible in the room with you — but it’s unlikely.

Through logic, you can see that the church concept of an all-loving heavenly creator doesn’t hold water. If a divine Maker fashioned everything that exists, he designed phenomena such as breast cancer for women, leukemia for children, cerebral palsy, leprosy, AIDS, Alzheimer’s disease, Down syndrome. He mandated foxes to rip rabbits apart (bunnies emit a terrible shriek at that moment) and cheetahs to slaughter fawns. No human would be cruel enough to plan such horrors. If a supernatural being did so, he’s a monster, not an all-merciful father.

When you get down to it, the only evidence of God’s existence is that holy men, past and present, say he exists. Priests have built worldwide, well-funded empires on their claim that an unseen deity waits to reward or punish people after death. But such priests once said that witches exist and burned thousands of women on charges that they flew through the sky, copulated with Satan, changed into animals and so forth. If their assertion about God is as valid as was their assertion about witches, their empires rest on fantasy.

The universe is a vast, amazing, seething dynamo which has no discernible purpose except to keep on churning. From quarks to quasars, it’s alive with incredible power. But it seems utterly indifferent to any moral laws. It destroys as blindly as it nurtures.

Martin Heidegger said we know only that we exist for a while, and we are doomed to die without knowing why we are here. If you are scrupulously honest, you can’t say much more than that.

This column is adapted from a piece originally published on Jan. 18, 2021, at Patheos/Daylight Atheism. The Great American Think-Off is a slightly whimsical philosophy competition run by a Minnesota cultural center. Winning thinkers get gold, silver and bronze medals, plus prize money. The 1996 debate was over whether God exists. The column started off as the (losing) entry Haught submitted.

January 21, 2021 Drop the state religion blither-blather — we need ‘a new day’
Recent Comments
0 | Leave a Comment
"As someone Born and Raised in NM, I was floored to learn that other places ..."
C.T. (A.K.A- That Lurker) Luminaria enlightens onlookers about real reason ..."
"> Today, freedom to believe as one wishes is locked securely in the heart of ..."
Jim Jones Many struggles won us our religious ..."
"some people can find a secret message between these to quotes ' 'they can find ..."
Cozmo the Magician The similarities between QAnon and evangelism
"Indeed. Which is what makes it so ironic that conspiracy theories are very effective tools ..."
(((J_Enigma32))) The similarities between QAnon and evangelism
Browse Our Archives
get the latest from
Freethought Now!
Sign up for our newsletter
POPULAR AT PATHEOS Nonreligious
1