Charter schools are independently run public schools that rely on taxpayer funds to operate. As such, they should be held to the same standards as traditional public schools, but often they are not. Sadly, some charter schools are taking advantage of this lack of oversight to indoctrinate rather than educate the children in their charge… and they are receiving public funds to do so.

State chartering agencies need to carefully scrutinize religious organizations that apply to open charter schools because there is an inherent risk that these schools will violate the Establishment Clause by promoting and endorsing religion to students.

FFRF has recently singled out Newman International Academy and Advantage Academy in Texas for brazenly promoting Christianity to their students, but these schools are not the first, and certainly won’t be the last, to take advantage of the charter school system to promote religion.

When forming, charter schools that intend to promote their own religious beliefs go to great lengths to appear secular on paper. They often don’t mention their religious motivations when they file to become a charter school, and only after they are granted charter school status do we see hints at how religion pervades their curricula.

In some cases, like Newman International Academy, the chartering agency was aware of the school’s religious motivations, but it received promises that those people who were deeply committed to evangelizing and proselytizing would not allow that motivation to influence the charter school. Unsurprisingly, the religious zeal held sway.

Newman International Academy founder Sheba George has described how she has a “longing for the strongest spiritual revival the world has even known.” Her biography touts her religious credentials. 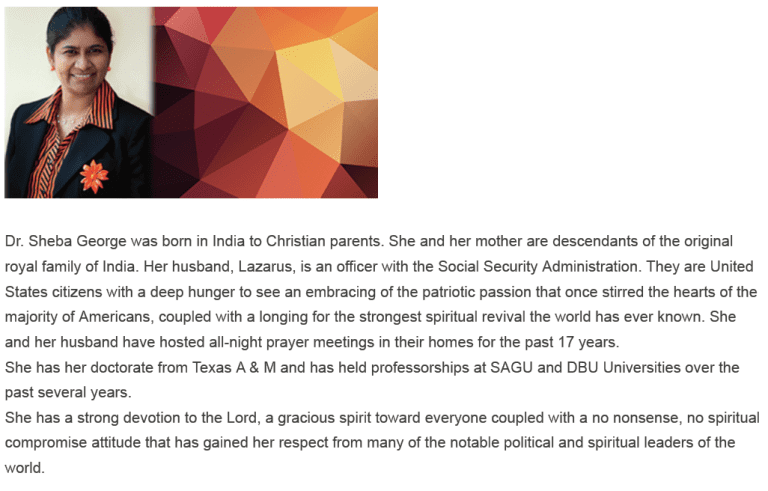 It’s therefore unsurprising that under her leadership Newman International Academy adopted this blatantly religious school song for the school:

Newman’s charter school application fails to include any intentions to incorporate religion into the school or the proposed school song, but it does include some red flags, especially the original and highly religious purpose for the school, which was later redacted. 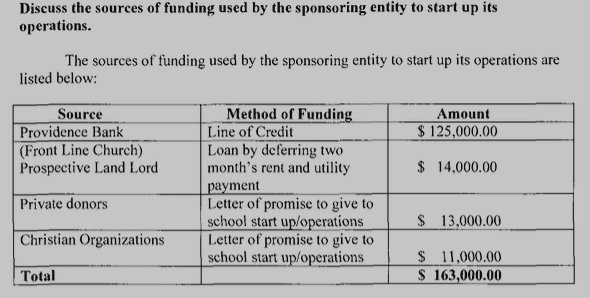 In a letter to the IRS, Newman’s attorney recognized that “a charter school cannot advocate any religious teaching because of the Constitutional principal [sic] of the ‘separation of church and state.’” He went on to describe that Newman’s application was conditionally accepted, provided that it “amend its organizing documents to remove all religious purposes…” 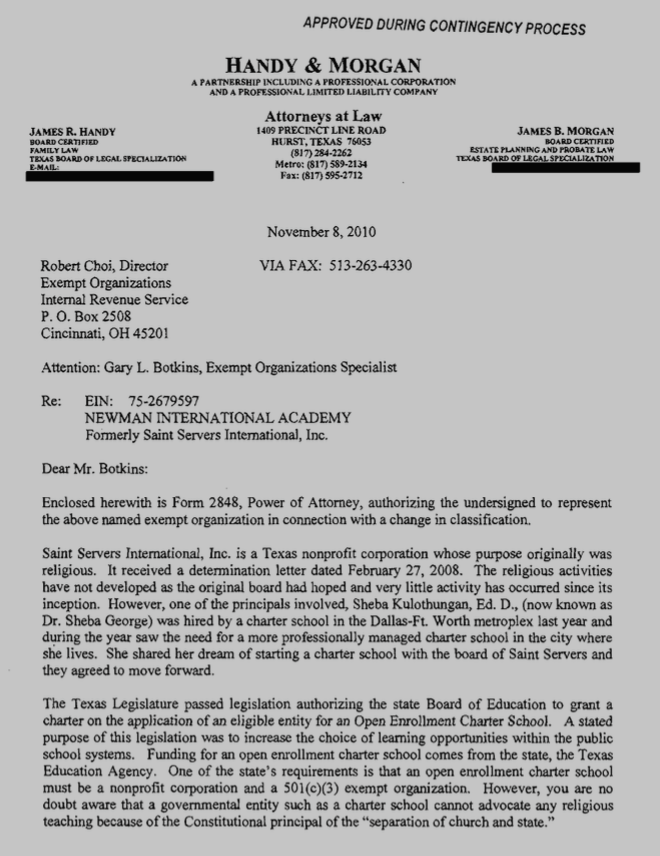 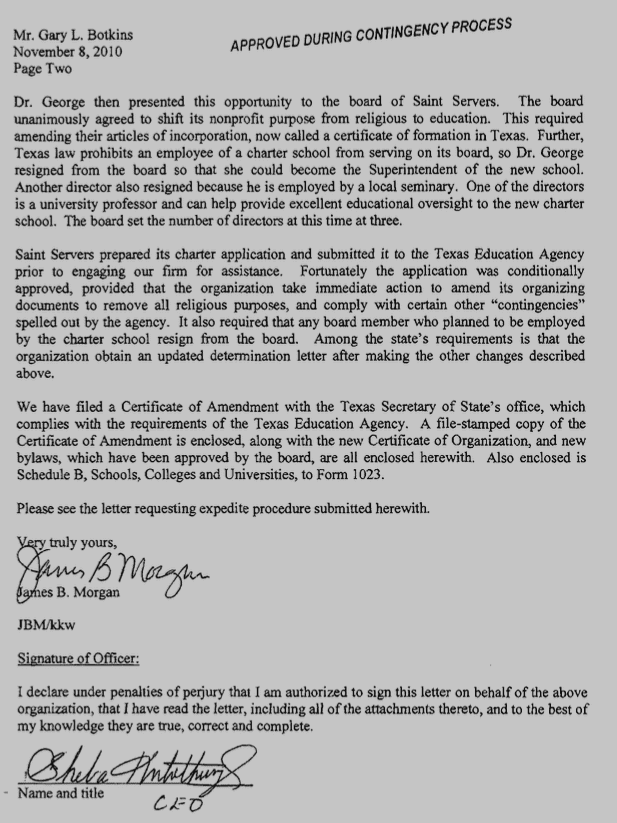 It did amend those organizing documents, but the original bylaws for Newman International Academy, which was originally called Saints Servers International Inc., are available in the charter school application and reveal the organization’s initial religious purpose, which it later revised in order to get approval.

The bylaws included a statement of faith that outlines some of its beliefs:

CHRIST BLOOD:
Because Jesus Christ lived a sinless life, His blood shed on the cross of Calvary is 100% sufficient to cleanse us of all sins when appropriated individually through repentance and faith. Jesus allowed himself to be punished for the sins we have committed, enabling all who believe to be freed from the penalty of sin, which is death (1 John 1:7; Rev. 1:5; Col. 1:20; Rom. 3:10-12, 23; 5:9; John 1:29).

Saints Servers International represented that it willing to give up preaching and proselytizing in order to establish a truly secular charter school, but the evidence suggests otherwise.

Similar to Newman, the founder of Advantage Academy, Allen Beck, has publicly state that he opened up Advantage Academy in Texas to “put the bible and prayer back into public schools.” Furthermore, he has bragged about how he duped the Texas Education Agency into allowing him to teach the bible to students. 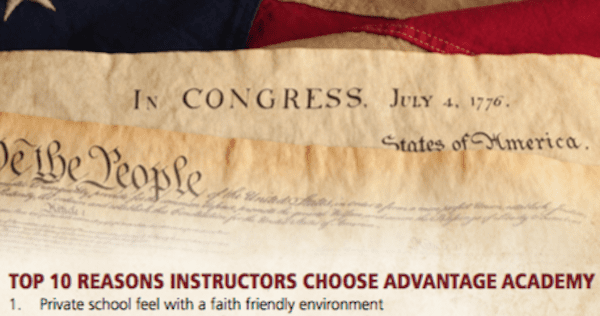 Again, none of this seemingly important information about this school’s origins and planned curriculum made it into Advantage Academy’s charter school application.

Though charter schools are free from many of the regulations that apply to traditional public schools, they still receive public funds and must follow the same constitutional mandates. Charter schools, even those founded by religious organizations or religious leaders:

Advantage Academy and Newman International Academy are not outliers. While it’s possible for deeply religious people and organizations to put aside their religious beliefs and create a truly secular school dedicated to the important mission of educating our nation’s youth, that is often not their motivation. Religious groups are drawn to public tax dollars, which they want to invest in promoting their personal religious beliefs.

The Texas Education Agency and other organizations in charge of approving new charter schools need to carefully scrutinize charter school requests from religious organizations. While it’s entirely possible that these schools will follow the required constitutional mandates, charter schools don’t deserve the benefit of the doubt. Too many have already abused the system.

Christopher Line is a 3L at the University of Wisconsin Law School. He has been both an intern and extern with FFRF.  FFRF is a national nonprofit dedicated to keeping state and church separate and educating about nontheism. For more information and a copy of our paper, Freethought Today, please click here. 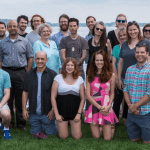 August 12, 2016 Pew report on social politicking reveals troubling trend that FFRF is doing something about
Recent Comments
0 | Leave a Comment
Browse Our Archives
get the latest from
Freethought Now!
Sign up for our newsletter
POPULAR AT PATHEOS Nonreligious
1