As we believers in science and reason lament President Trump pulling out of the Paris Accord, Christian politicians are lauding the decision to ignore climate change because god will “take care of it.”

U.S. Rep. Tim Walberg is a former pastor who represents Michigan’s 7th District and he believes climate change is real, which is progress of a kind, but doesn’t think humans need to worry about it.

Well, as a Christian, I believe that there is a creator in God who is much bigger than us. And I’m confident that, if there’s a real problem, he can take care of it.

Eric Erickson, a conservative Christian writer and radio host, is incensed that we would be concerned with the planet because he worships Jesus. Yesterday, he tweeted:

I worship Jesus, not Mother Earth. He calls us all to be good stewards of the planet, but doesn't mean I have to care about global warming.

I worship Jesus, not Mother Earth. He calls us all to be good stewards of the planet, but doesn’t mean I have to care about global warming.

He added some nonsense on his blog about many Christians “not truly worshiping the real Jesus, but a drag queen Jesus called Gaia.”

Climate Change is a state-church issue

This rhetoric from the Religious Right is nothing new. It’s one of the reasons that FFRF is treating climate change as a state-church issue.

God is not going to take care of climate change. Walberg’s god does not exist. Or if he does exist, he’s incapable of, or unwilling to, end child cancer or stop terrorists murdering in his name. Or perhaps he just hates polar bears. Walberg’s god may have the power to appear on toast, but when it comes to fixing big issues, clearly, it’s up to us.

God is just an idea—a particularly bad idea for which there is not a shred of evidence. People who believe in god and rely on god to solve genuine problems are not getting anywhere. That’s fine if for the poor sap who prays to win Powerball. But when those problems affect the environment and demand immediate action, as climate change does, then failing to act because of god poses a danger to all of us, not just the blinkered believer. In this case, believing in god is endangering humanity. Not only is there no god to fix climate change, the very idea of god is thwarting our ability to do so.

If the previous examples are too anecdotal, know that there are plenty more. Sen. James Inhofe of Oklahoma chaired the Senate Environment and Public Works Committee in 2015 and he took to the floor of the Senate to discuss, and in an unbelievably, almost deliberately ignorant fashion, “disprove” global climate change:

Of national attention and in case we have forgotten, because we keep hearing that 2014 has been the warmest year on record, I ask the chair, you know what this is? It’s a snowball just from outside here. So it’s very, very cold.

Sen. Sheldon Whitehouse of Rhode Island wiped the smug “mmm-hmmm” off Inhofe’s lips with a verbal backhand that is worth watching in full.

Piety is a problem

Why is Inhofe like this? In January 2005 he said that global warming was “the second-largest hoax ever played on the American people, after the separation of church and state.” Inhofe appeared on a Christian radio show, Crosstalk in 2012 and cited Genesis to bolster his position. According to the senator, Genesis 8:22 says “‘as long as the earth remains there will be seed time and harvest, cold and heat, winter and summer, day and night.” He continued, “My point is, God’s still up there. The arrogance of people to think that we, human beings, would be able to change what He is doing in the climate is to me outrageous.”

Inhofe’s comments perfectly illustrate how the religious mindset obstructs environmental progress. Inhofe believes that humankind is powerless to affect genuine change, except via prayer to his particular deity. Superstitious thinking will not help us overcome the obstacles our country faces.

Piety is part of the problem. Faith that a supernatural deity who listens to our pleas controls the environment is one of the stumbling blocks that prevents our country from addressing challenges underlying environmental disasters, like global climate change. The data is damning:

This pious electorate is problematic even if the legislators themselves are just manipulating religion. The cynic might argue that Inhofe, representing one of the top oil and gas producing states in the world, doesn’t believe the religion he’s regurgitating. But a deliberate conman is worse than a bumbling yet sincere believer. If the cynic is correct, Inhofe is using religion to manipulate Oklahomans into destroying their future to maintain an unsustainable status quo.

Inhofe is not the only one to cite Genesis. U.S. Rep. John Shimkus of Illinois has invoked the bible to attempt to refute the mountain of scientific data proving anthropogenic climate change. Reading from Genesis 8, the story of Noah and the Ark, and the Book of Matthew, Shimkus said: “The Earth will end only when God declares it’s time to be over. Man will not destroy this Earth. This Earth will not be destroyed by a flood. . . . I do believe God’s word is infallible, unchanging, perfect.”

He not only cited the bible, but clergy were there to back him up. This is from House of Representatives Subcommittee hearing on Energy and Environment from a few years ago. Shimkus lost office, but was re-elected. He’s still serving and is “a senior member of the House Energy and Commerce Committee and chairman of its Environment Subcommittee.”

If you’re still not convinced that climate change and environmental protection are state-church issues, let’s try this thought experiment: Imagine the world is ending tomorrow. We know this to be true. There’s a meteor the size of Asia heading our way at 72km/second. There is no reprieve.

Now ask yourself, what would you care about then? Greenhouse gases and miles per gallon? Would you care that melting polar ice is destroying polar bears? Would you worry about the Great Pacific garbage island that is far bigger than Texas and can be seen from space?

Probably not. That’s what it feels like to be convinced that Jesus coming back in the next 40 years, as 41 percent of Americans believe. He’ll bring the end times with him. This is the mindset that the environmental movement is fighting against, and it is welded onto our government in people like Inhofe, Shimkus, Walberg, and, of course, Mike Pence.

As I’ve previously written, the only afterlife we ought to care about is leaving our descendants and our planet a secure and pleasant future. Systems that deny facts and reality must not be used to dictate public policy. We have a duty to our children and grandchildren, to posterity, to the other species we share our planet with, to ensure our world is habitable for the future.

[Note: To any freethinkers out there who want write FFRF or debate me on the evidence for climate change, and especially if you wish to argue that there is scientific disagreement, please read this BBC article on something called agnotology, “The man who studies the spread of ignorance” and watch Mike Pence employ those tactics, before sending in your comments and complaints.] 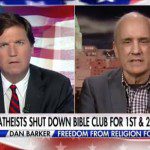 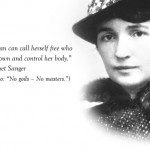 June 2, 2017 Handmaids in Gilead move over —you have company in the United States
Recent Comments
0 | Leave a Comment
Browse Our Archives
get the latest updates from
Freethought Now!
and the Patheos
Nonreligious
Channel
POPULAR AT PATHEOS Nonreligious
1