Amid all the bleakness, there is a bit of good news: The Good News Club, which aims to “save” children, is having a hard time in Milwaukee.

The Good News Club wants to convert your children using a combination of fear, tasty snacks and the public schools. The club employs food, games and prizes to entice children into their fundamentalist Christian bible study, where the children — as young as 4 years old — are then taught that they are sinners deserving of eternal punishment. The club tells the children that the only way to escape this terrible punishment is to believe what it tells them to believe and to do what it tells them to do. And all of this happens inside our public elementary schools.

See FFRF’s FAQ to understand why these Good News Clubs are in public schools.

But things aren’t going the club’s way in the Upper Midwest.

This summer, the Child Evangelism Fellowship, which is the group behind the Good News Club, brought hundreds of evangelical Christians to Milwaukee to convert children as part of its annual evangelical “blitz.” The fellowship recently posted the final statistics from the first phase of their invasion, which consisted of establishing week-long clubs in parks, day cares and outside of public schools throughout the Milwaukee area. It partnered with 20 local churches, set up clubs in 60 locations across Milwaukee, evangelized 1,838 children and “counseled” 88 children. “Counseled” is the fellowship’s term for conversion, meaning that a child has now been “saved” and follows the “correct” strain of Christianity.

While it is appalling that religious groups can have any success targeting and converting young children in public parks and outside of public schools, when you compare these results with the group’s most recent invasion, two years ago in Indianapolis, it’s clear that the Child Evangelism Fellowship has had trouble converting children in the Milwaukee area. Perhaps, this is partially thanks to the Freedom From Religion Foundation’s press release warning parents that these folks were coming.

In Indianapolis in 2015, the fellowship partnered with 31 local churches, set up clubs in 92 locations across Indianapolis, evangelized 3,406 children and “counseled” 322 children. Even if you adjust for Indianapolis’ larger population, the numbers there are still better for the group. Compared to 2015, the Child Evangelism Fellowship was only able to partner with two-thirds as many churches, set up two-thirds as many clubs, evangelize half as many children, and convert just a quarter as many children to their fundamentalist form of Christianity in Milwaukee.

Despite this positive news, the struggle to protect Milwaukee’s children is still far from over. Now, the 20 churches that partnered with the Child Evangelism Fellowship will each be tasked with starting a Good News Club at one of 17 different public schools in the Milwaukee area. They are hoping to convert public school children into evangelical Christians and new church attendees. Here’s a list of the schools that they are targeting, listed by district:

Hopefully, as information about the Good News Club continues to spread, parents will ensure their kids are not participating in these clubs. We must remind the Child Evangelism Fellowship that parents are responsible for the religious or nonreligious upbringing of their kids — not evangelical Christians obsessed with converting children. As the old saying goes, “Sunlight is the best disinfectant.” Milwaukee is proving this truism to be correct. 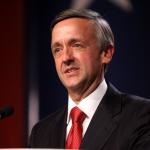 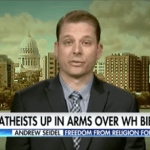 August 11, 2017 Weekly Report: We got our message out
Recent Comments
0 | Leave a Comment
"https://m.youtube.com/watch...Says it all really."
Brian Shanahan FFRF’s Freethought Now Blog has moved!
"I am unable to find an RSS feed for the new site. As I have ..."
David Brown FFRF’s Freethought Now Blog has moved!
"Should we expect new translations from the Greek, given this new lexicon?"
epeeist Recovering a secular ancient treasure
"It's a shame that Aristotle was the goto for answers for so many years and ..."
Jim E Jones Recovering a secular ancient treasure
Browse Our Archives
get the latest from
Nonreligious
Sign up for our newsletter
POPULAR AT PATHEOS Nonreligious
1