How we nonbelievers in Orlando grieved

How we nonbelievers in Orlando grieved June 20, 2016 Freedom From Religion Foundation

This is a guest post by David Williamson, organizer of FFRF’s Florida chapter, the Central Florida Freethought Community.

Three times now, I’ve heard the names of the Orlando dead read aloud to crowds gathered to mourn and rally for solidarity. On two of those occasions, each name was followed by a single solitary note, a church bell of all things. This rang hollow, as does the idea that prayer can do anything to help the victims.

The first time I heard the names read aloud was at an One Orlando Vigil right here in the thick of it just 15 blocks directly north of Pulse nightclub in downtown Orlando. The event was hastily assembled and began exactly 41 hours after the first shots rang out. You wouldn’t know it by the thoughtfulness and detail that went into making it such a meaningful and welcoming event. It was hosted by Equality Florida, who our organization and I have supported as an important advocate for LGBTQ equality across the state.

It was inspiring just to be there and feel the energy of the crowd. So many wearing rainbow shirts, and rainbow pins, and rainbow face paint. I regretted I didn’t have a lapel pin with a rainbow on it. I felt somehow less committed to the plight of the victims and my friends in the LGBTQ community without one, so I grabbed an Equality Florida sticker. I don’t know that anyone even noticed it but it helped me to feel more connected. I needed to feel that connection. We all needed it.

I expected prayers, but I didn’t see a single organized prayer that was part of the program. Even my friends Imam Muhammad Musri and the Rev. Bryan Fulwider, two of The Three Wise Guys on a local NPR radio program, appeared early in the event. They knew better than to engage a community crowd in interfaith prayer.

The only prayers I recall were those foisted on the crowd by some of the Christian speakers who were, presumably, invited because of their close ties to the LGBTQ and Latino communities. I am sure they felt it was their “duty” to involve the audience in Christian prayers “in Jesus’ name.” It may even have seemed perfectly appropriate for many who attended, but it was (as always) uncomfortable for a large number of those in attendance.

I recently learned that LGBTQ folks are twice as proportionately nonreligious as the general population:

While the majority still retain belief in a god and find comfort in prayer, it cannot be denied that the false, hateful and violence-inciting lessons of Christianity, Judaism, and Islam, among others, remain in scripture no matter how many people ignore them, reinterpret their meaning, or, worst of all, deny these passages have any sway in modern times.

As the sun fell behind Orlando’s little skyscrapers, these thoughts weren’t verbalized even if they were on people’s minds. It was hot and muggy, but it was easy to overlook the weather with all the emotions being felt.

Near the end of the event, my friend and colleague the Rev. Kathy Schmitz of the First Unitarian Church of Orlando came on stage with a diverse group of faith leaders from across Central Florida. And yes, we were there too. I stood, as an atheist, alongside religious leaders who all agree that, regardless of what scripture says and will always say, we cannot let it lead us to violence.

Our hard work in Orlando to engage and remain engaged with the Interfaith Council of Central Florida over the last four years has made our inclusion possible. Had I taken every opportunity to engage these faith leaders in debates about the meaning and value of their scripture, I assure you that I wouldn’t be invited. This is the cost of admission, I suppose.

In addition to my reticence, the welcoming nature of the council and its executive director, Jim Coffin, is to be credited. While my status as a certified Humanist celebrant (secular clergy member) helps to push down some barriers, it would not have been necessary in this case.

Schmitz led us onto the stage and offered a most appropriate tribute to honor the victims and console attendees. She invoked the “spirit of light and love and justice that has been called by many names and worshipped in many ways.” She said, “We gather as people of faith and people of conscience.” I wonder if even the most religious attendees noticed how secular that was. I surely noticed and thanked her for it later with a hug and the gratitude of the thousands of attendees who didn’t need for her to pray to us, pray for us, or pray at us. It was no surprise to me that she would do something so wonderful, and it would have been no surprise to those who know her and the inclusive nature of the Unitarian Universalist tradition.

While darkness fell further, we lighted our candles as a nearby church bell tolled once every 10 seconds for a total of 49 lives lost. I asked myself whether 10 seconds was all that could be afforded. That wasn’t enough to acknowledge an entire lifetime, even the short lives of the young victims. Almost all of them were in their 20s.

Then I realized just how much time it takes to give 10 seconds of silence to each victim. All candles were lit before the first minute was up, and I felt relieved.

As trivial as all this seems looking back with my rational mind, my emotions overtook me.

I worried when my candle almost went out twice in the cool breeze blowing over the stage, but I felt comfort knowing that others near me were protecting their flames and that it would only take a second for me to relight my candle with theirs if needed. I knew I could count on those around me to help if needed and I felt better. The symbolism of the light of the candle was so important.

When the bell finally stopped ringing, my mind refocused. We weren’t just there to remember those who were gunned down by hate, but to feel connected to one another and express our solidarity with the survivors left behind and to show the world that hate will never win the war—ever. I think most of the world knew that already, but it was nice to be able to say it again.

As I watched the event on video the next day, I did the math. It takes exactly eight minutes to ring a church bell 49 times at 10-second intervals. Every 10 seconds, the bell tolled. The bells divided the longest eight minutes of silence the city of Orlando has ever heard.

When we learned what happened at Pulse, universally our response was to ask: “How can I help?” Donating blood and sweat and tears won’t change what happened, but it can bring us together. It can join us with family, friends, colleagues, and especially strangers. The lines at the blood bank brought us together. The dozens and dozens of vigils across Central Florida brought us together. Together is where we belong at times like these, but not only at times like these.

As I drive from town to town across Central Florida, if there were no signs to tell me, I couldn’t tell you where one city begins and where another one ends. This should be a reminder to you and to me that no matter where you are you can always safely say #WeAreOrlando.

David Williamson is a director of the Central Florida Freethought Community, which assists local organizations in building a thriving secular community in the Orlando area, as well as advocating for separation of state and church. You can follow him at @freethoughtful. 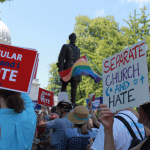 June 17, 2016
Special Weekly Report: Our adrenaline was rushing
Next Post

June 21, 2016 Catholic League: bill aiding rape victims actually meant “to rape the Catholic Church”
Recent Comments
0 | Leave a Comment
"Sure. Throwing money at bad behavior just ensures that bad behavior continues. Like subsidizing electric ..."
Person223 The Supreme Court, the pandemic, abortion ..."
"More than 12,400 American churches took in billions of taxpayer dollars under the pandemic relief ..."
Jim Jones The Supreme Court, the pandemic, abortion ..."
"I'll tell everyone here a little secret. Purpose Driven Life is an exercise in christian ..."
ephemerol | Freedom From Religion Foundation
"I think the main issue with with religious people not getting how secular people find ..."
swbarnes2 | Freedom From Religion Foundation
Browse Our Archives
get the latest from
Freethought Now!
Sign up for our newsletter
POPULAR AT PATHEOS Nonreligious
1