Is it a measles pandemic or is it really a crisis in critical thinking skills?

Is it a measles pandemic or is it really a crisis in critical thinking skills? May 7, 2019 Annie Laurie Gaylor 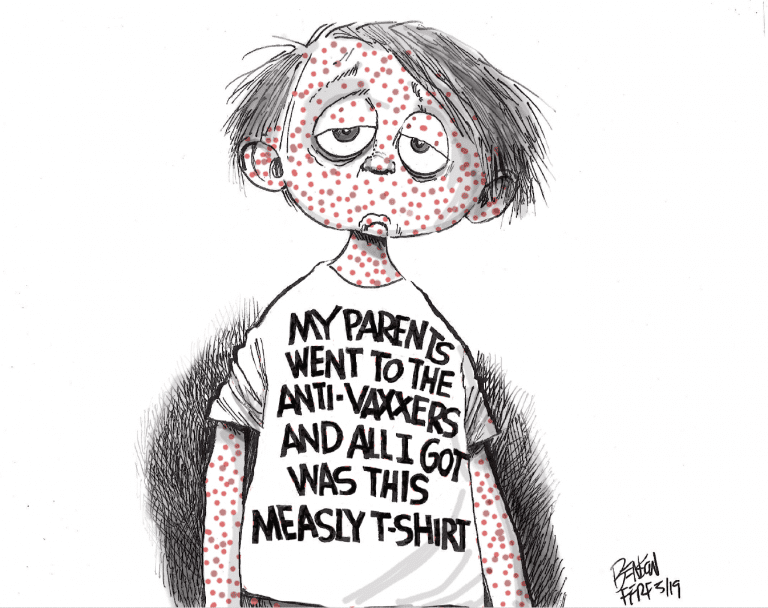 It seems the reported demise of measles was vastly exaggerated.

In the United States, where measles was considered totally eradicated back in 2000, cases of measles have grown to nearly 800 across 23 states as this is written. Sixty new cases have been reported since last week. Globally, reported cases of measles are up by 300 percent in the first three months of 2019, according to the World Health Organization.

Measles is one of the most contagious of diseases: A droplet from an infected person can linger in the air for more than two hours. According to the Centers for Disease Control and Prevention: “Measles is so contagious that if one person has it, up to 90 percent of the people close to that person who are not immune will also become infected.”

Measles ain’t benign, either: 20 percent of infected individuals end up being hospitalized. Serious complications include pneumonia, which one in every 20 children develops from measles, and encephalitis, which one in every 1,000 children develops, possibly causing deafness or intellectual disability. One or two in every 1,000 children die from measles. Globally, there were almost 90,000 deaths from the diseases in 2016, mainly in nations with low per capita incomes.

Despite these complications and despite the fact that measles is the most infectious disease in the world, nearly every U.S. state blithely permits parents to exempt their children from mandatory vaccination rules on the basis of religious objection. The widespread acceptance of the religious exemption has opened the door to broadening the exemption to apply to parents for any “personal belief” or philosophical exemption. Eighteen states now allow students to go without vaccinations based on personal beliefs. A number of those invoking religious, personal or philosophical objections are dupes of the anti-vax propaganda that claims the vaccine causes autism. (Need I add that it is proven that the vaccines do not cause autism?)

So what are some states doing in the face of this totally unnecessary and dangerous outbreak? States such as Washington and Wisconsin are working to remove the exemption for personal belief, while retaining the biggest cause of the outbreak: religious exemptions. Once again, religion, the culprit, gets a pass.

Physicians avoid giving the measles-mumps-rubella vaccine before age 1 because it is less effective. So babies, plus children and adults who are ill with chronic immune diseases and illnesses such as cancer, or who are allergic to vaccine ingredients, must rely on “herd immunity” to avoid contracting measles. This is placed at 90-95 percent of the population in the case of measles.

In a compelling letter to the New York Times last month, Maya Ajmera, the president of the Society of Science & the Public, put her finger on the problem:

“Our public health and children’s lives are at risk because so many parents, community leaders and policymakers lack the science literacy and critical-thinking skills to decipher fact from fiction. This widespread dismissal of science is a pandemic, and with each new crisis, it becomes clearer that we are treating the symptoms instead of the underlying disease. From vaccine skepticism to climate-change denial, ignoring proven science could have life-threatening or even catastrophic results.”

More than half of the current measles cases have been spread in New York City by Hasidic Jews who are not vaccinating their children. New York City has confirmed at least 423 measles cases since the outbreak began last October. Mayor Bill de Blasio, to his credit, issued an order late last year to bar unvaccinated students from attending school in certain neighborhoods. The city has issued violations to more than two dozen yeshivas and day care centers for breaking that order. In April, the city began closing yeshivas that are in violation. On April 15, it shut down a preschool program at a yeshiva in Brooklyn where two students had contracted measles.

De Blasio declared a public health emergency requiring all individuals within certain Brooklyn zip codes to be vaccinated against measles or face a $1,000 fine. A group of parents has filed a lawsuit against this, so we’ll see this major health epidemic play out as a state/church conflict.

In a thoughtful op-ed headlined “Hasidic Jews can’t ignore science,” Moshe Friedman traces the history of open defiance by some New York rabbis: “As infections linked to this outbreak spread as far as Michigan, I can’t help wondering what has made some of us dismiss basic science, embrace quackery and treat objective truths as if they are no more than suggestions.” He contends, “In the not-too-distant past, the ultra-Orthodox community was a champion of scientific knowledge and innovation.” What happened? Friedman summarizes defiance by rabbis of a rule that Mayor Michael Bloomberg’s administration enacted in 2012. This rule required parental consent before an infant could have a form of ritual circumcision linked to the spread of herpes. FFRF has written New York City about this unhygienic practice, in which the rabbi sucks blood from the penis of the infant being circumcised. The rule went into effect after 11 boys contracted herpes, with two dying and two suffering brain damage, between 2000 and 2011.

Some rabbis reacted by calling the rule “evil” and a “blood libel.” After he was elected, de Blasio repealed the parental consent rule, which FFRF had felt was inadequate in the first place. Since then, at least six infants have become infected by herpes. This successful medical mutiny also encouraged the rabbis to fight measles vaccinations.

Friedman concludes: “Whether out of shortsightedness or strategic malice, some of our religious leaders have directly fostered an atmosphere where thorough research is sneered at, the scientific method is doubted and the motivations of professionals are assumed to be nefarious and steeped in anti-religious animus.”

The only way to fight measles and to attain once more eradication of measles in the United States is for cowardly state legislators to repeal all non-health-related exemptions for mandatory vaccines. Three states have eliminated nonmedical exemptions, and Oregon is considering such a ban.

Perhaps some good will come out of this situation. Perhaps it will spur legislators to finally show some backbone and save the lives of innocent children by standing up to the Christian Science lobby and other religionists and eliminating in general religious exemptions for health care.

May 10, 2019 Composer of "God Bless America" did not believe in God
Recent Comments
0 | Leave a Comment
"https://m.youtube.com/watch...Says it all really."
Brian Shanahan FFRF’s Freethought Now Blog has moved!
"I am unable to find an RSS feed for the new site. As I have ..."
David Brown FFRF’s Freethought Now Blog has moved!
"Should we expect new translations from the Greek, given this new lexicon?"
epeeist Recovering a secular ancient treasure
"It's a shame that Aristotle was the goto for answers for so many years and ..."
Jim E Jones Recovering a secular ancient treasure
Browse Our Archives
get the latest updates from
Freethought Now!
and the Patheos
Nonreligious
Channel
POPULAR AT PATHEOS Nonreligious
1