Eager to pour gasoline on a mercifully smoldering fire, Jeffress spouted his uneducated opinion to the Washington Post about nuclear statecraft and diplomatic relations:

“When it comes to how we should deal with evildoers, the Bible, in the book of Romans, is very clear: God has endowed rulers full power to use whatever means necessary — including war — to stop evil,” Jeffress said. “In the case of North Korea, God has given Trump authority to take out Kim Jong Un.”
….
The biblical passage Romans 13 gives the government authority to deal with evildoers, Jeffress said. “That gives the government to [sic] the authority to do whatever, whether it’s assassination, capital punishment or evil punishment to quell the actions of evildoers like Kim Jong Un,” he said.

Fueling the public fire is bad enough, but Jeffress is also an evangelical advisor to President Trump. He “laid hands” on Trump in the Oval Office with other evangelicals in July, a shudder-inducing demonstration of the influence this particular strain of religion has in the White House. That access paired with such opinions is alarming for a few reasons.

First, Jeffress shows astonishing hubris, which I’m told comes before the fall. He knows nothing about diplomacy or foreign relations and yet has the ear of the president with a sensitivity to slights, a yearning to be seen as powerful, and a hair-trigger that lights up Twitter daily. Jeffress then has the unmitigated gall to fire off an opinion that could launch a nuclear weapon, especially given the president’s penchant for overreaction. This is not just pride, but a wanton recklessness that is inextricably tied up in the evangelical yearning for Armageddon and the second coming. Just last year, Jeffress delivered a two–part sermon entitled, “Countdown to Armageddon.” About five minutes into part one, he explains, “The Word of God says there is a time coming soon when this world is going to end. When the world forces will gather for that great, final, climactic battle called ‘Armageddon,’ and it will be climaxed by the return of Jesus Christ.”

Second, this hubris, as it so often is, is tied to a vast, unplumbed ignorance. Jeffress knows one book, his bible, and he doesn’t know it all that well. Jeffress is relying on Romans 13, which says:

“Let everyone be subject to the governing authorities, for there is no authority except that which God has established. The authorities that exist have been established by God.”

For a moment set aside the absurdity of perusing a disjointed fiction book written centuries before the invention of gunpowder to navigate a nuclear standoff in the 21st century. Notice that there is nothing in that text about American governments. According to Romans 13, Kim Jong Un’s regime in North Korea was also ordained by god. This is but one reason the bible is useless when it comes to government.

Not only is the bible useless, but in this case, flat-out wrong. Trump has no god-given power. As president, the only power Trump possesses flows from “We the People.” It’s right there in the first three words of the Constitution. It’s also in the Declaration of Independence: “to secure these rights, Governments are instituted among Men, deriving their just powers from the consent of the governed.” Not from god, not from the bible, and certainly not from a preacher with more piss, vinegar, and ignorance than common sense.

If the Trump administration’s cloying relationship with evangelicals and evangelical leaders has done anything, it has made clear the critical importance of state-church separation. Desperate for some proximity to secular power, Trump’s evangelical advisors have prostituted their religion and beliefs. Trump should not make the same mistake, he should heed the wise words of James Madison, “religion and government will both exist in greater purity, the less they are mixed together.” 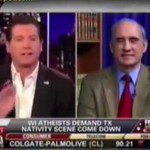 August 7, 2017
Fox News host who kicked me off his show gets kicked off himself
Next Post 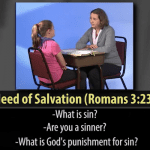 August 10, 2017 Good news: fundamentalist Good News Club struggling in Milwaukee
Recent Comments
0 | Leave a Comment
Browse Our Archives
get the latest from
Nonreligious
Sign up for our newsletter
POPULAR AT PATHEOS Nonreligious
1

“First Moments in Heaven” — When...
Godzooks: The Faith in Facts Blog
Related posts from Freethought Now!