Religion is an impediment to gender equality

Religion is an impediment to gender equality April 20, 2021 Freedom From Religion Foundation 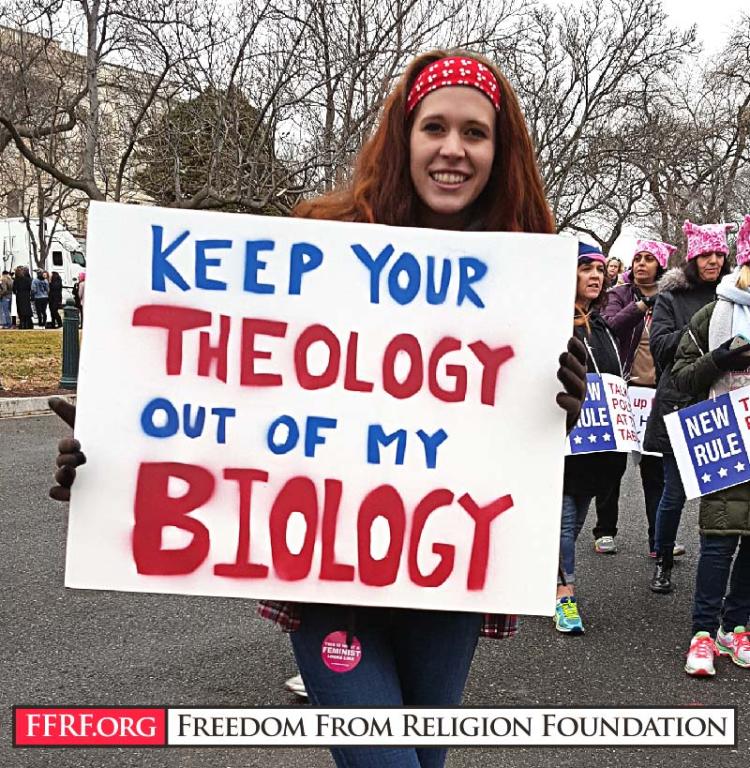 Economic opportunities, maternal health, participation in society and government, and public health and safety are all intertwined with bodily autonomy. Religion is very often an obstacle on this front.

Simply put, when women are able to make choices about their bodies, they are able to make choices about their lives and livelihoods. And yet a startling new report by the U.N. Population Fund (UNFPA) finds that almost half of women in 57 countries around the world do not have the power to make choices over their health care, contraception or sex lives. “The State of World Population” report notes that millions of women’s lives “are governed by others” as they “cannot make their own decisions about whether or not to have sex, use contraception or seek health care.” Many of these inequalities can be traced to “patriarchal beliefs [that] often translate into expectations that women defer to their husbands or partners in all aspects of their lives, including their sex lives.”

And while the report does not examine this data under a religious lens, it would be remiss to divorce the impact of religion on patriarchal beliefs. For example, the report explains how lack of bodily autonomy is tied to narrow views of sexuality, conversion therapy, submission to male figures, female genital mutilation, menstruation discrimination, child marriage, unequal access to contraception, and abortion restrictions. These are all areas in which major religious traditions around the world have explicitly or implicitly used ideology to drive patriarchal and discriminatory practices. It also mirrors other research on the parallels between religion and patriarchy: “Religious doctrines, beliefs and practices serve to translate to everyday experiences the patriarchal ideologies that legitimize and reinforce the existing gender hierarchy.” Therefore, the underlying current of religion is a major factor in why women and girls do not yet have full bodily autonomy.

The U.N. report further explains that while rights to bodily autonomy and integrity are recognized under international human rights law, many countries do not have laws, policies, or programming that support this. Rather, the 57 countries that were surveyed either severely limit or outright deny access to contraception, comprehensive sex education, abortion and other sexual and reproductive health resources. Heartbreakingly, the findings determine that girls and women were “often unaware that they had the right to say no.”

That’s why it is so important for our secular voices to champion gender equality. One of the ways that we can make a difference is by supporting legislation that aids bodily autonomy and gender equality. Perhaps one of the most salient pieces of legislation is the Global Health, Empowerment and Rights Act (Global HER) Act, which would prevent future presidents from imposing the Global Gag Rule. The Global Gag Rule prevents U.S. funding to any foreign nongovernmental organization that provides or even mentions abortion services. We can also look to end destructive domestic policies like the Hyde Amendment, which denies subsidized abortion care to women on Medicaid or in the Indian Health Services program.

Information access and education are paramount to dismantling these discriminatory systems. And yet, much like Eve in the Garden of Eden, religion often prevents women from seeking truth and knowledge. Let’s work toward creating a world where women are informed and empowered to make the choices that are right for themselves.

April 21, 2021 Life is randomly cruel
Recent Comments
0 | Leave a Comment
"Pity they didn't add "Show Me The Proof" to this. https://uploads.disquscdn.c..."
Jim Jones Carl Sagan was a brilliant skeptic
"As someone Born and Raised in NM, I was floored to learn that other places ..."
C.T. (A.K.A- That Lurker) Luminaria enlightens onlookers about real reason ..."
"> Today, freedom to believe as one wishes is locked securely in the heart of ..."
Jim Jones Many struggles won us our religious ..."
"some people can find a secret message between these to quotes ' 'they can find ..."
Cozmo the Magician The similarities between QAnon and evangelism
Browse Our Archives
get the latest from
Freethought Now!
Sign up for our newsletter
POPULAR AT PATHEOS Nonreligious
1