By Andrew L. SeidelStaff AttorneyFreedom From Religion Foundation
[Note: portions of this article were posted earlier on the author’s Facebook page.]

Religion perverts love. The San Bernardino shooters, a husband and wife, left their six month old baby with family before their rampage. This fact has haunted me since it surfaced the day after the attack. At the time, when the shooters’ motivations were still not clear, I thought it was the strongest current piece of evidence to indicate religion played a role in the attack. Now we know that religion played a central role. The killers were motivated by religion and used it to justify their actions.

These parents, as Bill Maher laconically put it, were “dropping a baby off to go to a massacre.”

Steven Weinberg said that, and that's how you get ppl who "always acted normal" (don't they always?) dropping a baby off to go to a massacre

They didn’t abandon their child out of need, or frustration, or to give it a better life, or to go to work for the day. They planned to abandon their child in favor of gunning down as many innocent people as possible and dying in the process. Even more disturbing, they apparently brought this child into the world knowing that they were going to abandon her. That child will one day learn not only that her parents murdered 14 people, but also that they deserted her to do so.

How can a couple do this? What force can warp a mind so? What can poison the instinctual and overwhelming love parents feel for their child?

Religion often demands that adherents honor the religion first and the family second. In the Quran, it says, “O Believers, fight with these disbelievers who are near you…” 9:123. According to Sayyid Abul Ala Maududi’s The Meaning of the Qur’an, the phrase “near you” in this passage tells Muslims to:

…crush these internal enemies, without paying the least regard to the racial, family and social relations that had been proving a binding force with them.

Stating the plain fact, supported by nearly all of human history, that religion motivates people to commit acts of evil is not to say all religious people commit acts of evil. Criticizing Islam is not the same as criticizing or stereotyping all Muslims. There are many Muslims who put our shared humanity over such hateful passages. But that doesn’t mean that Islam does not motivate violence in other Muslims.

Should any Christians reading this think that their religion is exempt from this rule, think again. Jesus said himself that he came to divide families, to turn family members against one another. 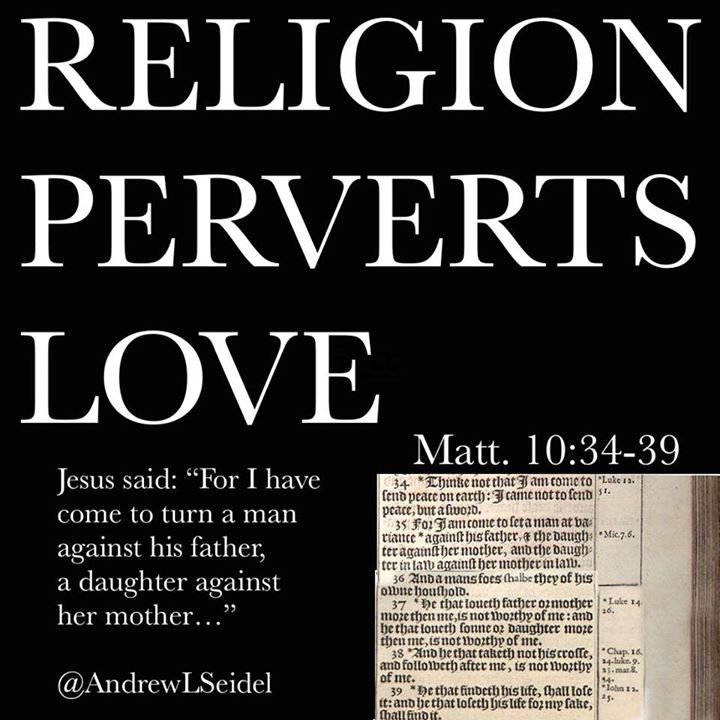 If your very own brother, or your son or daughter, or the wife you love, or your closest friend secretly entices you, saying, “Let us go and worship other gods” … do not yield to them or listen to them. Show them no pity. … You must certainly put them to death. Deut. 13:6-9

Religion warps love by interposing an imaginary figure between families. You are required to love the faith and the savior more than your parents, your spouse, or your children. Otherwise familial fidelity and love interfere with people’s dedication to the religion. Religion puts god first, family second, including your beautiful, helpless 6-month-old. Religion perverts love. 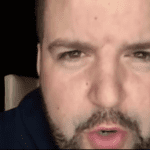 December 4, 2015
Joshua Feuerstein thinks America kicked god out of schools in the 1960s, but it was much earlier
Next Post 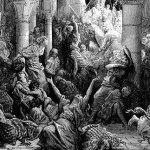 December 11, 2015 Does the Bible Call for the Death of Nonbelievers?
Recent Comments
0 | Leave a Comment
"https://m.youtube.com/watch...Says it all really."
Brian Shanahan FFRF’s Freethought Now Blog has moved!
"I am unable to find an RSS feed for the new site. As I have ..."
David Brown FFRF’s Freethought Now Blog has moved!
"Should we expect new translations from the Greek, given this new lexicon?"
epeeist Recovering a secular ancient treasure
"It's a shame that Aristotle was the goto for answers for so many years and ..."
Jim E Jones Recovering a secular ancient treasure
Browse Our Archives
get the latest updates from
Freethought Now!
and the Patheos
Nonreligious
Channel
POPULAR AT PATHEOS Nonreligious
1