Spare us your ‘Thoughts and Prayers’ — Actions Speak Louder

On any given day, ostentatious displays of religion course through social media. After a tragedy, the undercurrent of “thoughts and prayers” becomes a flood. Standing against that current isn’t popular, but at FFRF (one of whose mottos is “Nothing Fails Like Prayer”) we do it anyway. Occasionally, I’ll point out that prayer is not a substitute for action and that it can even be dangerous because many people sending #PrayersForVegas or the latest tragedy treat it as a substitute for real action or reform — especially politicians.

So last week, I responded to the trending hashtag:

There was some blowback including from some in the media. One writer, Brandon Ambrosino, chastised me for criticizing that which I don’t understand, first on Twitter, and then in an article in which he asked, “who says prayer doesn’t ‘work?’ ”

Unrelated to Ambrosino or myself, the usually reliable Atlantic published Katelyn Beaty’s article, “The Case for ‘Thoughts and Prayers’—Even If You Don’t Believe in God.” Beaty, who apparently considers herself a none, argues “prayer is not inaction . . . it is perhaps the most powerful form of action you can engage in during a crisis—and that’s true whether you believe in God or not.” Beaty undermines her own argument when she begins referring to the scientific benefits of daily meditation or self-calming, not sending thoughts and prayers in the wake of a tragedy.

Even with this bait and switch, Beaty is at least trying to use facts and data to back up her point. But she blows it at the end writing, “To insist that we humans can heal the world’s pathologies on our own, without any appeal to God or spirituality, is just hubris. And it hasn’t worked for us yet.” Actually, we humans are the only thing that has helped to heal the world, and since there is no god, we are doing it on our own. Realism is not hubris. If anything smacks of hubris, it’s believing that an all-powerful being created this insanely vast universe just for us and that by whispering to him we can alter his divine, omnipotent will.

Daily meditation may indeed lead to better mental health, but the prayers we’re all talking about— #PrayersForVegas, #PrayersForOrlando, #PrayersForBrussels, #PrayersForParis, and on and on and on—do nothing. And actually, praying may be worse than doing nothing because prayers allow a person to feel like they are doing something, when they aren’t. In his article, Ambrosino quotes the pope to support his point: “Prayer that doesn’t lead to concrete action toward our brothers is a fruitless and incomplete prayer.” Well, yes, that’s because prayer is fruitless, action is not.

Prayers assuage negative emotions that give us the drive and motivation to change the world before we’ve actually done anything to foster that change. So it’s not just that prayer doesn’t work; prayer can actually hurt.

As humans, we feel a deep and powerful empathy toward our brothers and sisters who are suffering and dying. This seems especially true for senseless, preventable violence. And here, the violence is quite literally senseless — we aren’t equipped to make sense of it. We want to do something. Anything. We need to help.

That overwhelming compassion can drive us to act—to donate blood or time or money or to call a legislator. But not if we squander that compassion on prayer. The affinity we feel, the sympathy that drives us to help is what makes us human. If we pray that sympathy away, we’ve not only done nothing to help, but we’ve assuaged the motivation to do something while doing nothing. We’ve replaced our shared humanity with a fictional friend.

So yes, prayer will make some religious people feel better, but they’ll feel better having done nothing.

Now imagine, just for a moment, if the millions of people who claimed to pray for the victims of these tragedies or for the tragedies to stop had instead donated one dollar for each prayer to a nonprofit working to actually accomplish those goals. Where would we be? 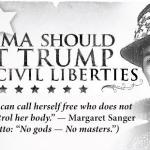 October 6, 2017
Weekly Report: We aren’t afraid of controversy
Next Post

October 13, 2017 Weekly Report: A riveting week for us
Recent Comments
0 | Leave a Comment
Browse Our Archives
get the latest updates from
Freethought Now!
and the Patheos
Nonreligious
Channel
POPULAR AT PATHEOS Nonreligious
1