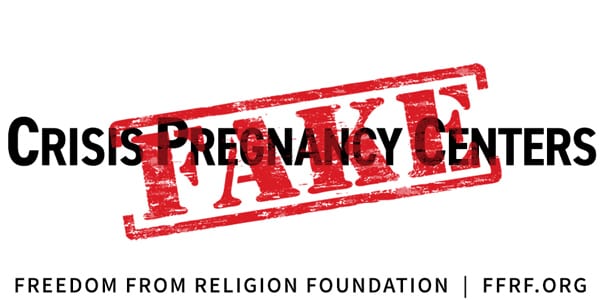 You’ve perhaps seen them: inconspicuous buildings and vans with hopeful signage like We Inform. You Decide., Pregnancy Options Counseling and Abortion Information. They look harmless, possibly even inviting. Their websites emphasize free services and promise supportive counseling. But lurking underneath the cheerful pictures and promising words lies a religious attack on women’s bodily autonomy and on accurate medical information — often propped up by tax dollars.

These centers pose as facilities that offer free medical services to pregnant women seeking an abortion. In a country where women do not have access to free, comprehensive reproductive health care, and where abortions can cost anywhere from $550 to $3,000, the centers have capitalized on that gap by offering pregnancy tests and ultrasounds for no cost. However, they are not licensed medical facilities. And despite the white lab coats that their employees wear, there are often no actual doctors or licensed medical professionals in sight.

The mission of Crisis Pregnancy Centers is to dissuade women from obtaining an abortion. Religiously rooted, they use outdated, flawed or biased studies to back up their claims that abortion is dangerous. In reality, study after study has shown that abortion is completely safe and that 99 percent of women do not regret receiving an abortion.

While many abortion clinics have been deemed unessential and forced to temporarily close during this pandemic, Crisis Pregnancy Centers have remained open. Additionally, abortion clinics are barred from providing scientifically safe telehealth services, but these centers are able to provide phone consultations. Carol Graham, founder and CEO of a Crisis Pregnancy Center in Missouri, recently remarked: “We received many abortion-seeking calls and were able to provide hope, help and Christ’s love at a very uncertain time in their lives . . . the result was many decisions for life.”

The American Medical Association Journal of Ethics has explained that Crisis Pregnancy Centers are unethical because “the religious ideology of these centers’ owners and employees takes priority over the health and well-being of the women seeking care at these centers.” Despite this dangerous medical misinformation, the U.S. Supreme Court has ruled that Crisis Pregnancy Centers are protected by the First Amendment and religious freedom. Additionally, tax dollars help fund religiously inspired centers across the country. For example, Indiana, Michigan, Missouri, North Dakota, Ohio, Pennsylvania and Texas allocated $30 million in federal welfare funds over four years for such centers. In Georgia, 16 clinics have received $6.7 million in federal funds.

Meanwhile, President Trump’s domestic gag rule prevents any organization that receives Title X funding to provide or refer patients for an abortion. In fact, this rule forced Planned Parenthood Federation of America, a Title X recipient for nearly 50 years, out of the program. And since Planned Parenthood had served 40 percent of all Title X patients, more and more women are at risk of going to a Crisis Pregnancy Center in search of low-cost care.

As a secular nation, it is imperative that we uphold the separation of state and church. Crisis Pregnancy Centers are rooted in religion, misinformation and deceit — and public money should not be funding such places. Our tax dollars should instead support science-based comprehensive reproductive health care.

July 10, 2020
The Supreme Court, the pandemic, abortion rights and profound questions
Next Post

July 14, 2020 Existentialism: a philosophy for secular humanists
Recent Comments
0 | Leave a Comment
Browse Our Archives
get the latest from
Nonreligious
Sign up for our newsletter
POPULAR AT PATHEOS Nonreligious
1