We stood up for science in front of a fundamentalist coffeeshop

We need to call religion out for the role it is playing in worsening the pandemic. Dan Barker and I did our bit when we joined a diverse group of protesters to picket a coffeehouse in suburban Madison, Wis., that is openingly defying a county order mandating masks indoors. 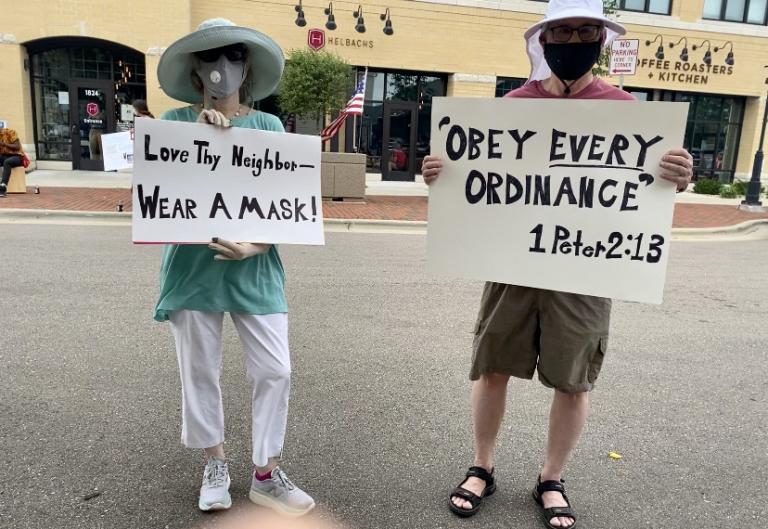 Unfortunately, Wisconsin’s COVID trajectory has continued to climb, rising to more than 42,000 confirmed cases to date. While our Democratic governor has been prevented by political opponents and our state Supreme Court from enforcing statewide health orders, Dane County has decided to get proactive.

The joint we picketed, Helbachs Coffee in Middleton, is run by a family connected with a large evangelical church that was instrumental in creating highly divisive so-called “Jesus Lunches” at Middleton High School. While businesses are directed to post a warning that masks and social distancing are mandatory (with exceptions during actual eating and drinking, of course), Helbachs placed this sign: “This is a mask free zone. Please remove mask before entering.” When a family last week innocently wandered in, not realizing they were in a hotbed of coronavirus science deniers, the 6-year-old daughter was taunted to the point of tears for wearing a mask. A few individuals began picketing the bakery. A TV reporter covered the episode, interviewing a city health worker who stated that she got nowhere talking to the owners, and the incident became big news locally.

Helbachs quickly removed the notorious “no mask” sign. But the mandatory poster about wearing masks was nowhere to be seen when we and others protested on Saturday, July 18. And hardly anyone entering or leaving was wearing a mask.

Dan and I showed up to the in-progress protest at the same time as a number of police vehicles. A number of men, including a person well-known for his ultraconservative political views, were hanging around, with at least one sporting guns. The masked police spent a long time conferring with these men, who kept their distance through the rest of the protest. 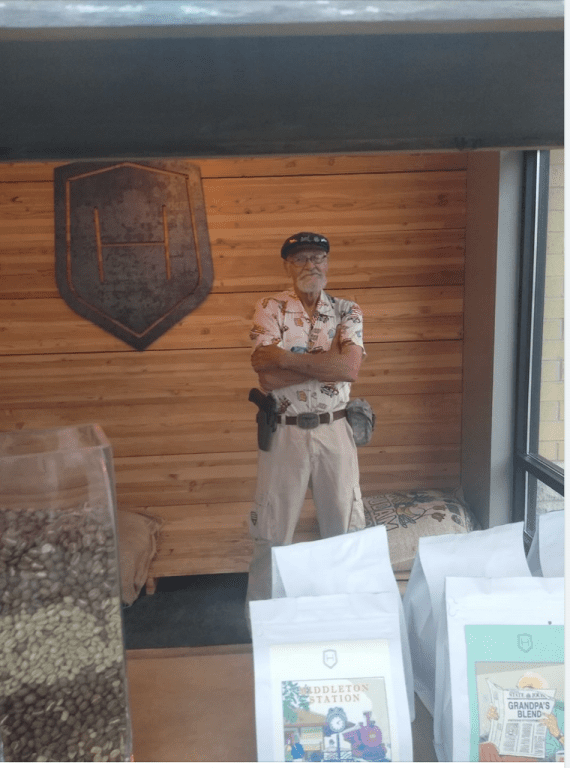 We carried signs with biblical allusions intended to appeal to the Christian owners: “Love Thy Neighbor: Wear a Mask” and “Obey every ordinance,” a reference to I Peter 2:13, about Christian obligation to obey human laws. As we picketed back and forth in front of the large windows revealing the customers inside, we received responses ranging from a few friendly nods or dismissive looks, to a woman who repeatedly gave us the finger and a man who pulled up his shirtsleeves to show off a large tattooed cross (evidently to prove why the shop and customers didn’t need to comply with the law). 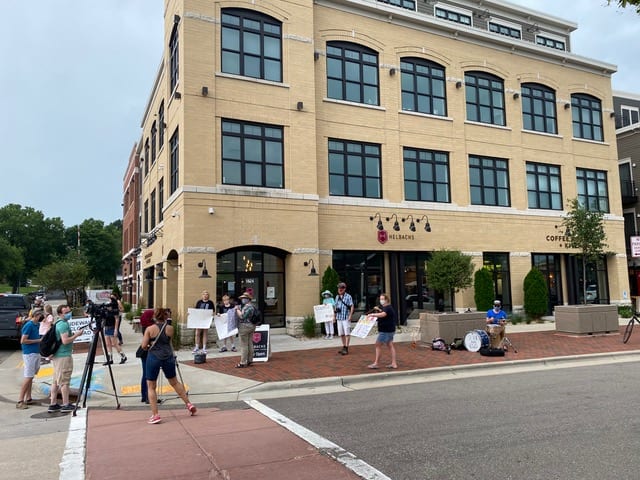 One maskless customer came outside to ask us if he could pray for us. Dan replied, “You can pray for us if we can think for you.” Without missing a beat, the man seriously agreed. While starting to pray, he put his hand up in the air, as if casting out demons. When Dan pressed him about why he wasn’t obeying the bible verse that says “Obey every ordinance,” the man said, “I cannot obey it, I am a sinner, we are all sinners.”

After getting such reactions to the benign “Love thy neighbor” sign, I decided to scrawl “Hell no, Helbachs” on the back of my sign, and Dan added to his placard the slogan: “COVID Science Deniers Can Go to Helbachs.”

We protesters were briefly counterpicketed by a maskless woman dragging along a tween-age son. She held up a sign, “My body, my choice,” but, naturally, she turned out to be anti-abortion. As the conversation escalated between this white woman and a young woman of color protesting the bakery, the counterprotester spat at her. That is a disgusting thing to do to anyone for any reason, but is truly an assault in the age of COVID, and I’m glad to say the young protester filed a police complaint.

Most of the customers going in and out of the restaurant seemed bemused by the attention and unconcerned about health mandates. But the customers’ anti-science beliefs were clear from the tenor of remarks and from the fact that almost all of them were defying the Dane County masking requirement in the first place.

As rain started, we left with a feeling of disappointment that these irrational and often mean-spirited individuals may be beyond reach. As the Wisconsin Department of Health Services notes, “COVID-19 remains very contagious and most people in Wisconsin are still at risk of getting sick from the virus.” Dane County is in the “high activity level” — hence the relatively new indoor masking requirement. But the customers at Helbachs acted like medical recommendations based on science and protection of public welfare are just a joke.

What isn’t a joke is for a place of business to openly flout a public health order — for its fundamentalist owners to act as if they are above the law due to their “sincerely held religious beliefs.” The Public Health Madison and Dane County office has the authority not only to fine Helbachs, but to suspend its food and drink license for two weeks, and possibly revoke it altogether. The Freedom From Religion Foundation will be asking Dane County to start taking action. 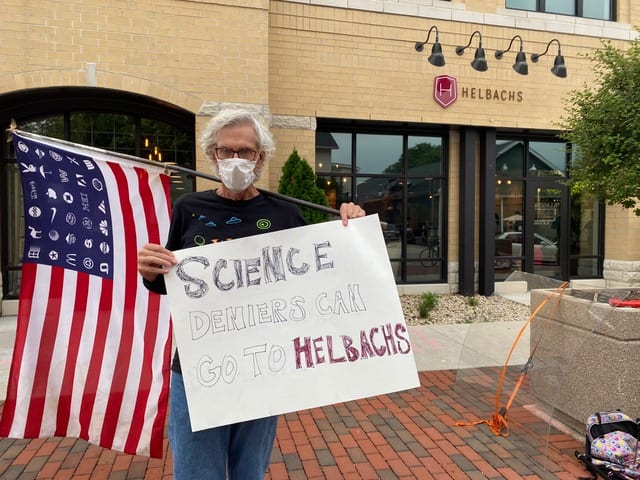 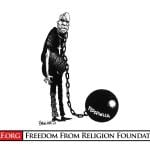 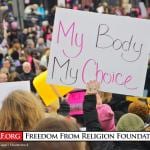 July 20, 2020 Reproductive restrictions in Catholic hospitals are insidious and anti-women
Recent Comments
0 | Leave a Comment
"https://m.youtube.com/watch...Says it all really."
Brian Shanahan FFRF’s Freethought Now Blog has moved!
"I am unable to find an RSS feed for the new site. As I have ..."
David Brown FFRF’s Freethought Now Blog has moved!
"Should we expect new translations from the Greek, given this new lexicon?"
epeeist Recovering a secular ancient treasure
"It's a shame that Aristotle was the goto for answers for so many years and ..."
Jim E Jones Recovering a secular ancient treasure
Browse Our Archives
Related posts from Freethought Now!