Weekly Wrap: A power outage, challenging a week of ministry, and bringing the secular view to Washington

Weekly Wrap: A power outage, challenging a week of ministry, and bringing the secular view to Washington July 26, 2019 Freedom From Religion Foundation

This week’s wrap will encompass two weeks of happenings at FFRF as a power outage in our hometown of Madison, Wis., last Friday took the Internet down with it. The Friendly Atheist reported that a pro-life group blamed the power outage on “God’s wrath regarding abortions.” Yes, you read that right. 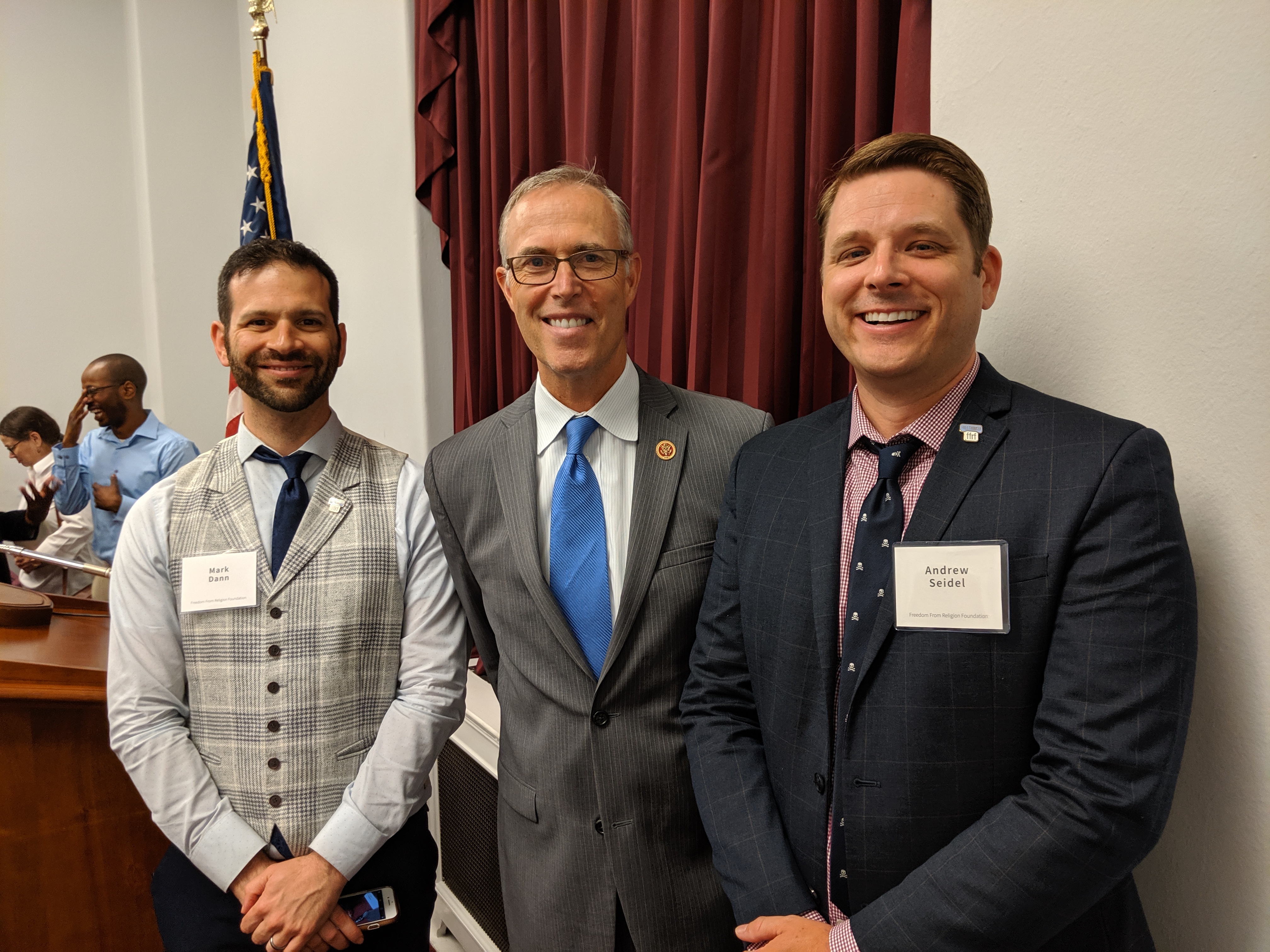 The State Department under Mike Pompeo held a megaconclave titled “Ministerial to Advance Religious Freedom,” and we were there to provide a different perspective. Partly due to our efforts, Rafida Bonya Ahmad, whose Bangladeshi-American freethinker husband was brutally killed by Islamist extremists in Dhaka, was invited to speak at the gathering about the horrific attack that also severely wounded her. (FFRF has instituted the annual Avijit Roy Courage Award in Avijit’s memory.) FFRF Co-President Annie Laurie Gaylor and FFRF Director of Strategic Response Andrew Seidel were also there with her to advance the freethought cause and to lobby with members of Congress. 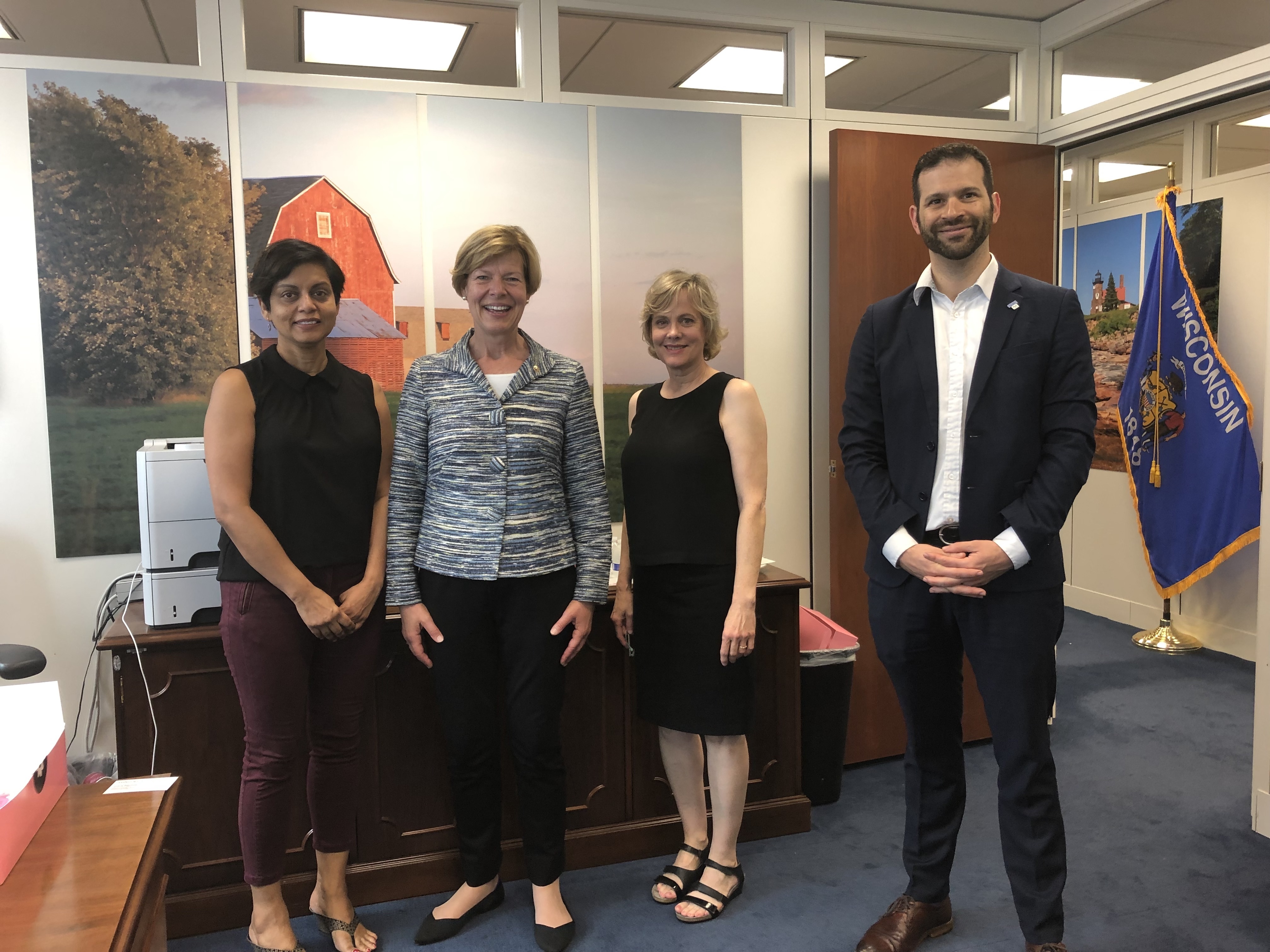 Pompeo has made sure that the State Department has made the propagation of Christian Nationalism a part of its mission. It is setting up a religiously inclined commission, and we are determined to figure out what it’s all about. Pompeo’s past statements and actions don’t inspire much confidence.

In response, we joined close to 200 other organizations as well as hundreds of former government officials, academics and activists calling on the State Department to dissolve its new so-called Commission on Unalienable Rights.

“We object to the commission’s stated purpose, which we find harmful to the global effort to protect the rights of all people and a waste of resources; the commission’s makeup, which lacks ideological diversity and appears to reflect a clear interest in limiting human rights, including the rights of women and LGBTQI individuals,” the letter stated.

Director of Strategic Response Andrew Seidel dove into the details of this problematic commission on our live Ask an Atheist program and this week’s Freethought Radio. 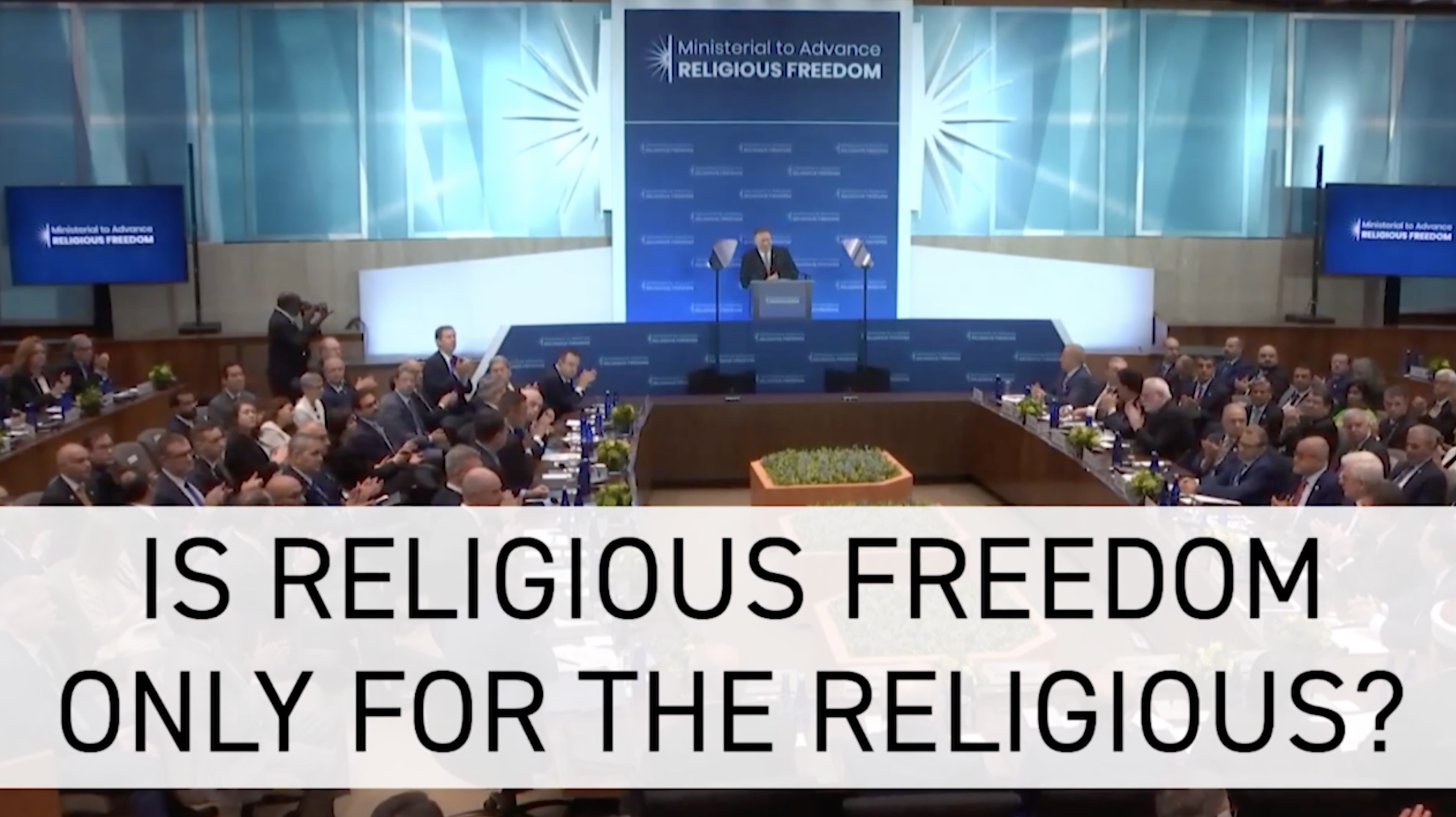 Defending Atheists in Foxholes
The State Department is not the only agency in the Trump administration propagating the majority religion. The VA has recently issued a decree that will, under the guise of “religious liberty,” ease the way for placing religious (read Christian) exhibits at its facilities nationwide. “Were the VA truly concerned about protecting the religious freedom of veterans, it could simply do what the Constitution prescribes and keep its facilities free from government-endorsed religion,” FFRF Associate Counsel Sam Grover wrote to Secretary of Veterans Affairs Robert L. Wilkie.

Watch Sam explain on our “Newsbite” segment why the VA rule change is so potentially consequential — and what we intend to do about it.

A Supreme Legacy
President Trump and his Supreme Court appointments could learn a lot from Justice John Paul Stevens. Stevens, who died last week, left an amazing legacy behind, including on state/church issues. It’s too bad that the current Supreme Court didn’t have Stevens’ words in mind when handing down its recent awful decision on the Bladensburg cross. In a similar case years ago, Stevens emphasized that using a cross as a war memorial does a disservice to non-Christian veterans, writing, “The cross is not a universal symbol of sacrifice. It is the symbol of one particular sacrifice, and that sacrifice carries deeply significant meaning for those who adhere to the Christian faith.” We’ll miss him. 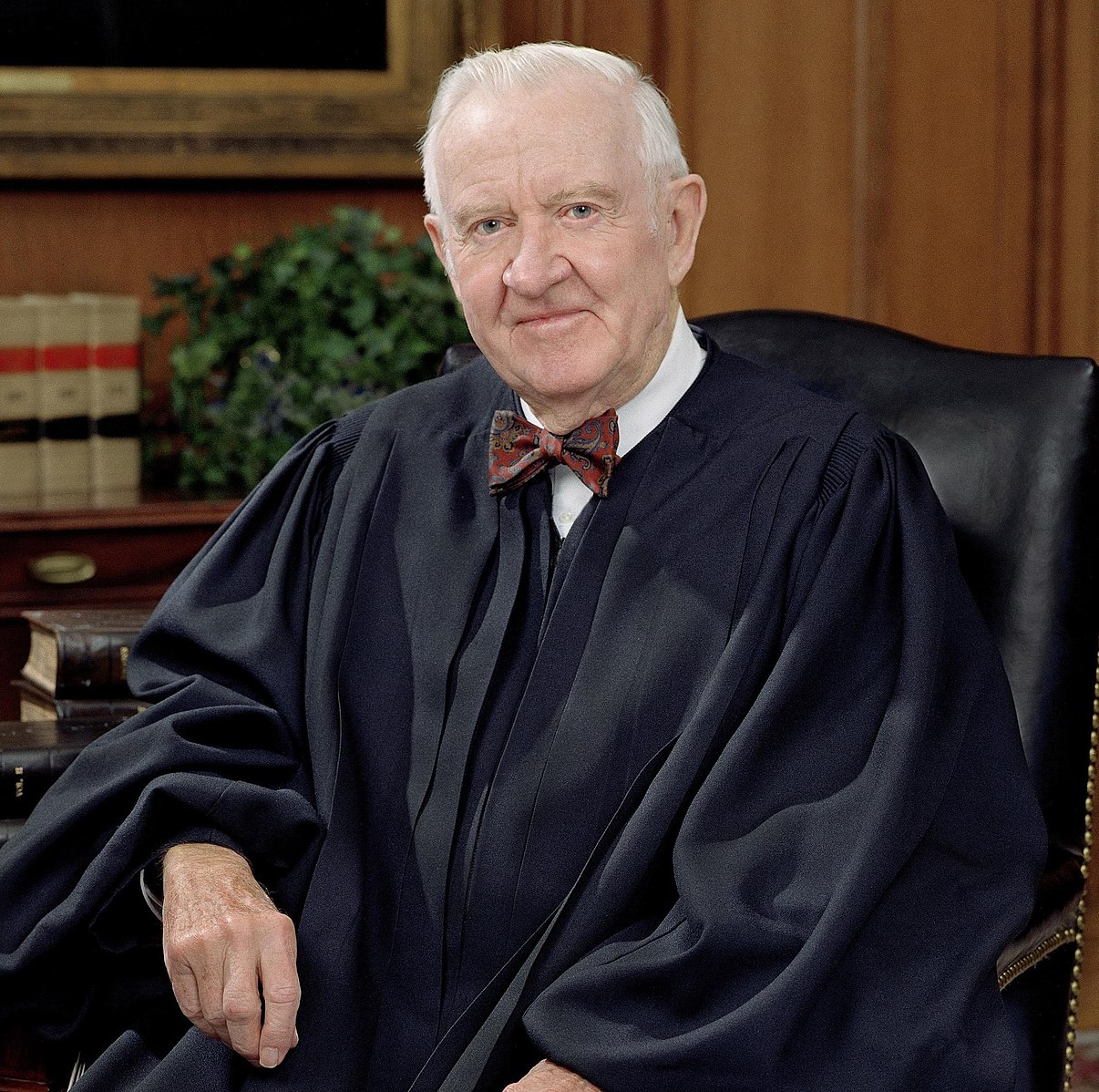 We mourned the death of Justice Stevens on our radio show last week. FFRF Co-President Dan Barker had a fascinating conversation with a former colleague of his, Marian Wiggins, from his Christian days, who, like him, has “seen the light.”

Our national focus informed our local interventions, too, last week. We pointed out to an Alabama sheriff who has engaged in a back-and-forth with us that a recent circuit court ruling on President Trump’s social media accounts makes it much harder for him to misuse his. “Because recent developments further solidify the constitutional violations taking place on the ‘Covington County Sheriff Blake Turman’ Facebook page, we repeat our request that the page be discontinued,” Sam wrote to the Covington County Commission.

‘Week of Ministry’
In Michigan, we took on a ministry that goes around schools preaching its religious message. The Conquerors International Strength Team (yup, that’s the actual name) held a “week of ministry” earlier this year at several schools during which the head guy stated: “The Conquerors International Strength Team exists for one purpose and one purpose only, and that is to transform communities worldwide with the gospel of Jesus Christ.” These guys shouldn’t be allowed back in, we’re telling the school districts.

We made sure to have a bit of fun, too. Dan and Freethought Today Editor PJ Slinger recounted all the crankmail that our organization receives on a regular basis (the “crankmail” column is a favorite among our readers). You’ll have fun at the expense of the pathetically written missives directed our way. 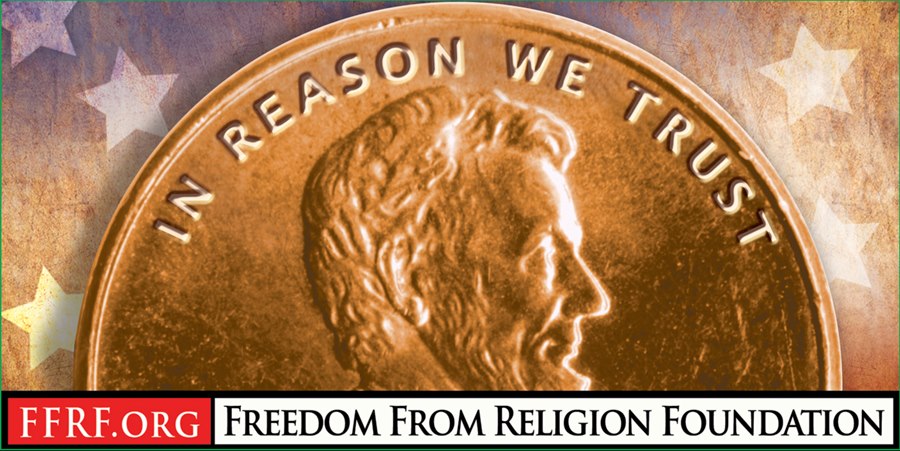 The religious absurdity continued this week. A troubling new state law took effect in South Dakota that mandates displaying “In God We Trust” in all public schools. The law — insultingly confusing patriotism with piety — is part of the nationwide legislative push by Project Blitz, which is a stealth campaign to inject religious bills into state legislatures across the country. It is a terrible violation of freedom of conscience, Co-President Annie Laurie Gaylor pointed out to The Associated Press. 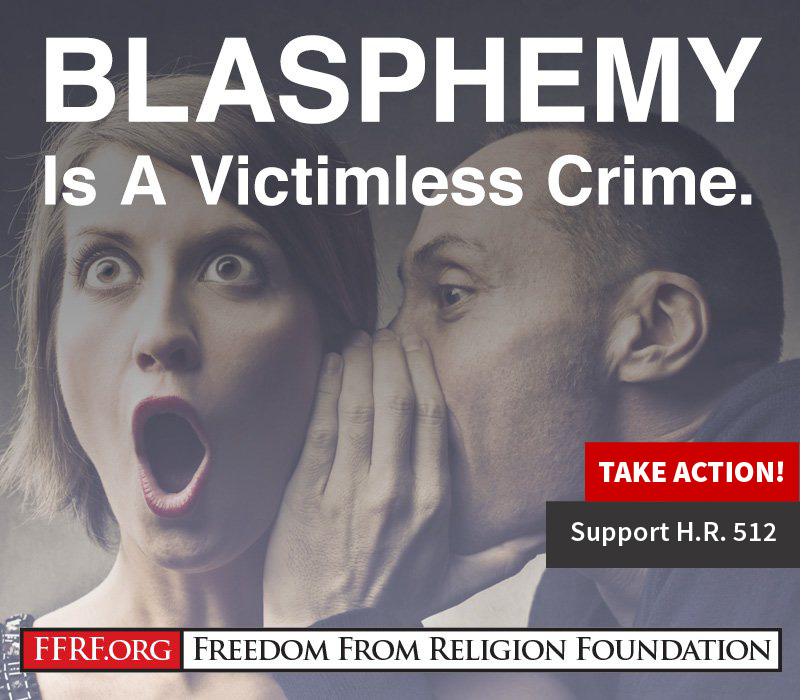 Finally, we asked our members to urge their U.S. representative to support House Resolution 512, a renewed effort to support the global repeal of blasphemy laws. The resolution, introduced in a bipartisan initiative by Reps. Jamie Raskin, D-Md., and Mark Meadows, R-N.C., specifically notes that “secularists” are frequent victims of such laws.

Whether we’re in serious, policy-driven or in a fun mode, we do it all only due to you and your generosity. 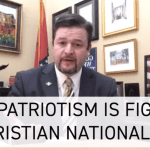 July 12, 2019
Winning in court, striving on Capitol Hill, and reaching out to youth
Next Post 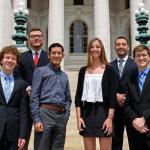 August 2, 2019 Receiving media attention, dealing with death, nurturing youth, and reaching out
Recent Comments
0 | Leave a Comment
Browse Our Archives
get the latest updates from
Freethought Now!
and the Patheos
Nonreligious
Channel
POPULAR AT PATHEOS Nonreligious
1

Liberty
Give me liberty or give me death. ---Patrick Henry The author of...
view all Nonreligious blogs
What Are Your Thoughts?leave a comment
Copyright 2008-2021, Patheos. All rights reserved.