Winning in court, striving on Capitol Hill, and reaching out to youth

Winning in court, striving on Capitol Hill, and reaching out to youth July 12, 2019 Freedom From Religion Foundation

Another week, another court victory for the Freedom From Religion Foundation!

Along with Americans United and the ACLU, we prevailed on Tuesday against a constitutionally disdainful board of commissioners in Florida that had censored nontheistic invocations at its meetings. 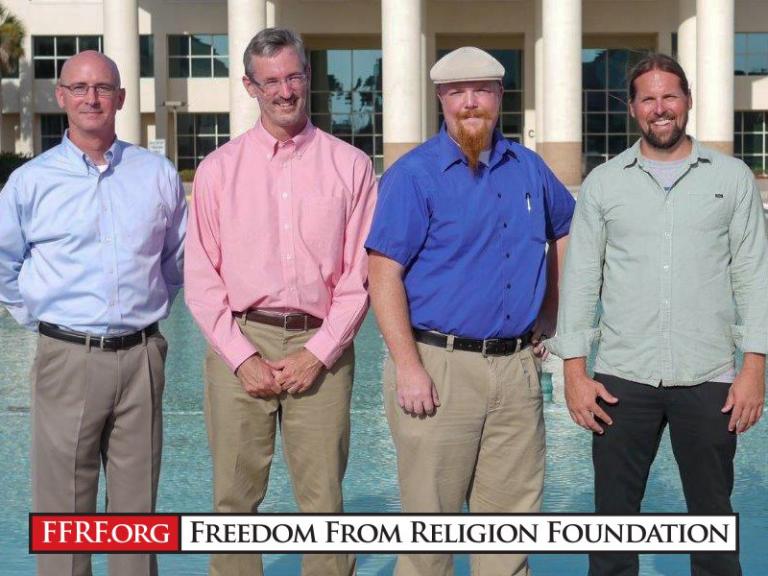 “The 11th U.S. Circuit Court of Appeals ruled that the Brevard County Commissioners’ policy of using religious beliefs to determine who can offer invocations at public meetings is unconstitutional, discriminatory and a violation of religious freedom,” the local paper reports. “The case was brought by the Freedom From Religion Foundation, Americans United for Separation of Church and State, the American Civil Liberties Union and the ACLU of Florida on behalf of several nontheists whom commissioners have barred from offering invocations.”

Watch FFRF Legal Director Rebecca Markert concisely explain on our “Newsbite” segment our victory — and why it’s so significant. 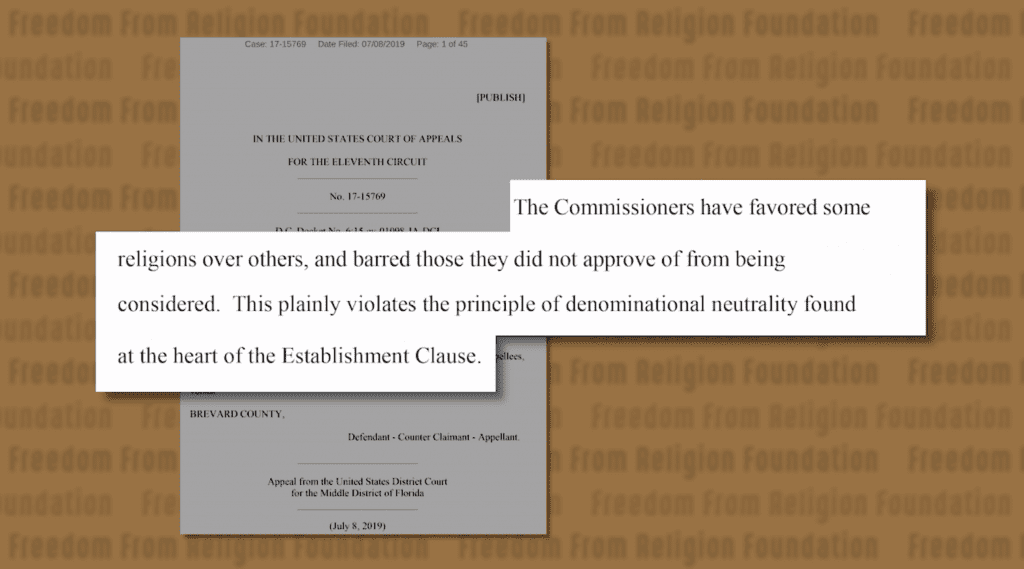 Rebecca also joined FFRF Co-Presidents Dan Barker and Annie Laurie Gaylor on our weekly radio show and podcast as they interviewed David Williamson, lead plaintiff in the case (and head of our Florida chapter), about the legal triumph. 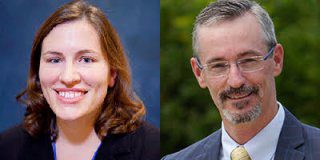 Please don’t endorse faith-healing!
A victory for the Constitution is something we especially savor. Wouldn’t it be great if we could get other governmental entities to follow suit?

That’s why we strongly complained when an Illinois town provided its endorsement to a bizarre faith-healing event during which, the organizers claimed, four people were “filled with the Holy Spirit with the evidence of speaking in tongues” and folks were allegedly cured of “thyroid lumps, fibromyalgia pain, bronchitis and many other ailments.”

“It is extremely inappropriate for city officials to use their position of power to promote fringe religious beliefs,” commented Annie Laurie.

Great of you to skip the pledge
Some small towns are heading in the opposite direction. We commended a Minnesota city council for skipping the Pledge of Allegiance during its meetings. “The false patriots who are upset about omitting the pledge need to be reminded that their elected officials swore to uphold the U.S. Constitution, not to perpetuate fundamentally un-American traditions from the 1950s,” FFRF Staff Attorney Ryan Jayne wrote in thanking the St. Louis Park mayor.

North America isn’t too secular
Ryan also took on the country’s leading creationist “think tank.” A factotum of the Discovery Institute bemoaned, in the National Review, about the secular direction that Canada is headed in and worried that the United States may follow suit. “Canada is doing just fine, thank you very much, and the U.S. government needs less religion, not more,” Ryan riposted.

We’re toiling for you in Congress
We’re working overtime in the halls of Capitol Hill. FFRF Director of Governmental Affairs Mark Dann (our new lobbyist in D.C.) movingly recounts our attempts to get more funding for secular recovery programs that could perhaps have helped his friend.

“I don’t know what could have saved Ray, but I wish he had some additional treatment options,” he writes. “If we can fulfill this legislative goal, so many more Americans will have other options to get the help they need.”

We’re connecting with young people
We’re always reaching out to youth as part of our work, and this week was particularly eventful on that front. We launched a campaign to back young freethinkers of color. FFRF is shining a light on their experiences through a new video (please watch the dramatic one-minute video) and a billboard campaign highlighting three freethinking students of color, and has an essay contest devoted to students of color. 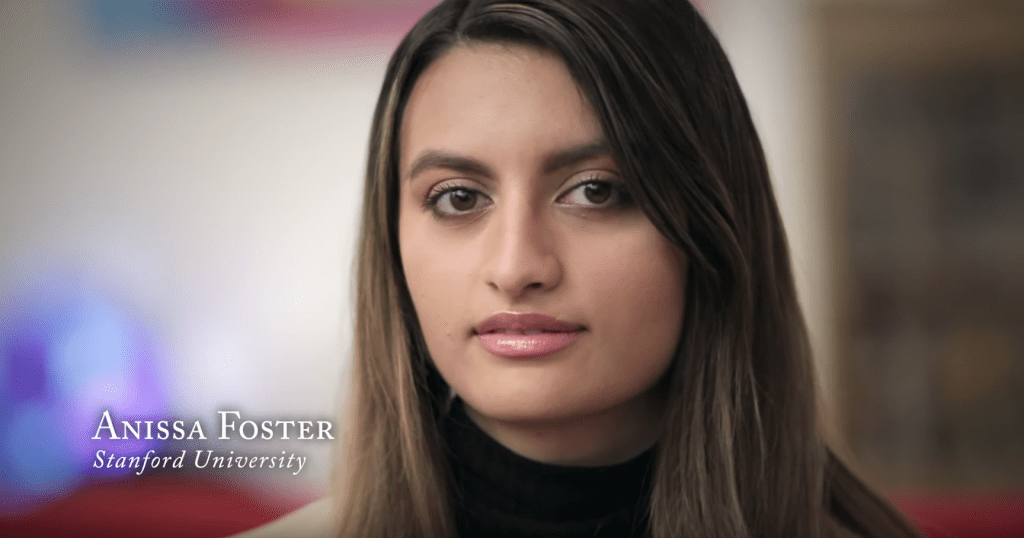 We also announced the winners of this year’s high school essay contest, with a whopping $17,750 in scholarship money for college-bound seniors. They were asked to write an essay based on this prompt: “Why we must rely on ourselves, not God, to solve the world’s problems.” Congratulations to the winners! (You can listen to Dan and Annie Laurie interview the third-place winner, Shiv Shah, on our radio show this week and hear other winners in the weeks to come.) 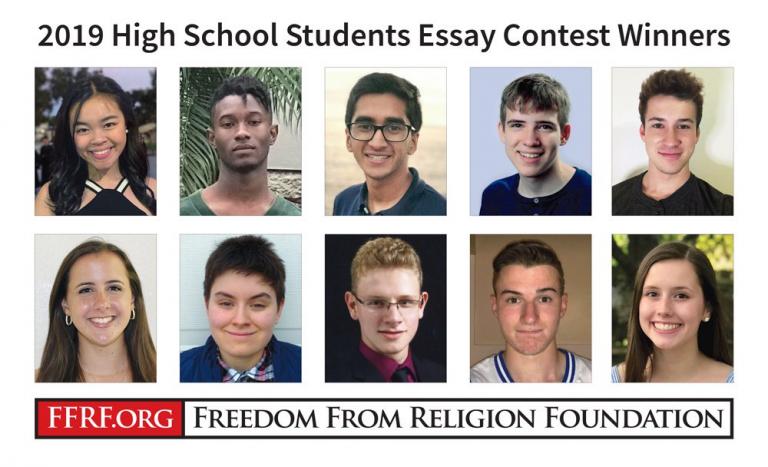 Debunking Christian Nationalists
FFRF Director of Strategic Response Andrew Seidel is having a fun time this week. On our “Ask An Atheist” Facebook Live feature Wednesday evening, he ripped apart, along with Dan and Annie Laurie, the misbegotten notions of Arkansas state Sen. Jason Rapert, a Christian Nationalist from hell. 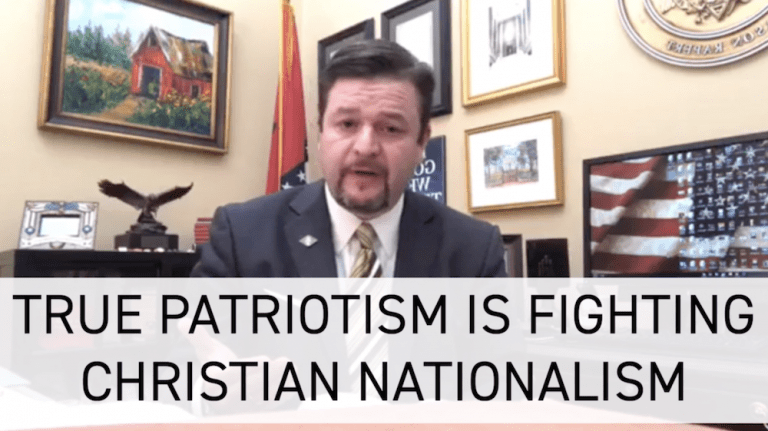 And the coming Sunday (July 14), he will talk at the University of Southern California campus (as part of a Secular Students Alliance conference) about his new book The Founding Myth: Why Christian Nationalism Is Un-American.

Court victories, book talks, legislative work, youth outreach, and warnings to the constitutionally errant — they’re all part of a week of work for us that we’re able to accomplish only due to you. 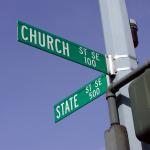 July 8, 2019
Keeping church and state separate does not stifle religious freedom
Next Post 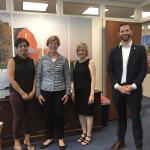 July 26, 2019 Weekly Wrap: A power outage, challenging a week of ministry, and bringing the secular view to Washington
Recent Comments
0 | Leave a Comment
"https://m.youtube.com/watch...Says it all really."
Brian Shanahan FFRF’s Freethought Now Blog has moved!
"I am unable to find an RSS feed for the new site. As I have ..."
David Brown FFRF’s Freethought Now Blog has moved!
"Should we expect new translations from the Greek, given this new lexicon?"
epeeist Recovering a secular ancient treasure
"It's a shame that Aristotle was the goto for answers for so many years and ..."
Jim E Jones Recovering a secular ancient treasure
Browse Our Archives
get the latest updates from
Freethought Now!
and the Patheos
Nonreligious
Channel
POPULAR AT PATHEOS Nonreligious
1