With Secretary of Education Ben Carson, America needs FFRF now more than ever

One name reveals why the Freedom From Religion Foundation will be essential in a Trump-governed United States: Dr. Ben Carson, Secretary of Education.

Buzzfeed News has obtained a shortlist of cabinet appointments from President-elect Donald Trump’s transition team. There are only two people up for Secretary of Education, one of whom is Carson.

This is a position that FFRF will be watching closely. We get nearly 5,000 state-church complaints every year, and half of those concern violations in the public schools. If Carson gets this appointment, we’ll have a lot of work ahead of us. We’ll need your help.

Those are two important “facts” derived from the book of fairy tales upon which Carson bases his life. But Carson’s anti-education, pro-religious-myth views don’t end there.

He thinks that “highfalutin scientists” came up with the Big Bang, which he thinks is “even more ridiculous” than the old trope of a hurricane going through a junkyard and building a 747. And he has claimed that “ultimately,  if you accept the evolutionary theory, you dismiss ethics, you don’t have to abide by a set of moral codes, you determine your own conscience based on your own desires.”

Ben Carson is for a vast expansion of vouchers, claiming that “the best education is homeschool, the next is private schools.” He has called public schools “the best propaganda system in the world.” Carson has also wanted banners displayed in public schools with the acronym “THINK BIG,” when the “G is for God.” According to his book, he’s still bitter about not being allowed to use public schools to promote his personal religion.

The common thread here is Carson putting his religion-addled worldview above facts and the mountains (pyramids?) of evidence that support those facts.

If he’s given control of our nation’s education system, FFRF has little doubt that Carson will abuse it. He will abuse a public office that belongs to We the People to foist his personal religion on other people’s children. But before accepting this appointment, Carson should know that FFRF is going to pummel him with the First Amendment.

Carson by himself isn’t the only problem, though. More alarmingly, his appointment will be seen as a signal by many teachers that religion in public schools is now acceptable.

Not on our watch.

FFRF is going to continue protecting our public schools from vouchers that bankrupt a secular system and give money to unregulated, ineffective religious schools. [Read more about the problems with vouchers here.]

We will stand between nonreligious families and the religious bullies that threaten them.

We are going to take on any teacher that chastises a student for opting out of the godly Pledge.

We will preserve the teaching of evolution and rain down lawsuits on schools that insist on preaching creationism.

We are going to expel the Gideons — those predatory adults who want to give children books that promise eternal torture — from our public schools.

We are going to plague teachers and coaches who think preaching to and praying with a captive audience is their Christian right.

FFRF is going to keep our schools secular. We are going to defend the Wall of Separation. We hope you’ll join us. 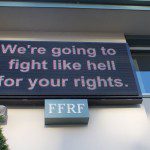 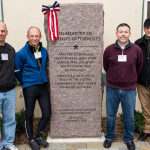 November 11, 2016 Special Weekly Report: Continuing our fight for our country
Recent Comments
0 | Leave a Comment
Browse Our Archives
Follow Us! 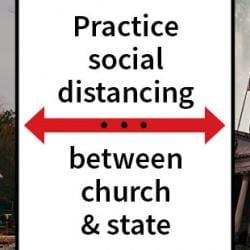 Nonreligious
The coronavirus (and other things, too)!
Freethought Now!
TRENDING AT PATHEOS Nonreligious