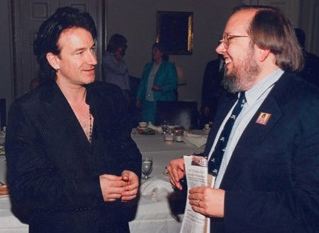 Terry Mattingly writes the nationally syndicated “On Religion” column for the Scripps Howard News Service in Washington, D.C., and is director of the Washington Journalism Center at the Council for Christian Colleges and Universities.

Mattingly’s father was a pastor and his mother is a language arts teacher. Thus, it’s no surprise that Mattingly is a journalist and teacher who focuses on religion and that he continues to study both writing and religion. He double-majored in journalism and history at Baylor University and then earned an M.A. at Baylor in Church-State Studies and an M.S. in communications at the University of Illinois in Urbana-Champaign.

He has worked as a reporter and religion columnist at the Rocky Mountain News in Denver and the Charlotte Observer and the Charlotte News. In 1991, Mattingly began teaching at Denver Seminary and, later, was a founding member of the Association for Communications and Theological Education.

While teaching, he has continued to write the weekly “On Religion” column for the features department of the Scripps Howard News Service in Washington, D.C., which is sent to about 350 newspapers in North America. He is the author of the book “Pop Goes Religion: Faith in Popular Culture.”

In addition to his classroom duties, Mattingly lectures at Gordon-Conwell Theological Seminary in South Hamilton, Mass., the Torreys Honors Program at Biola University, the School of Journalism at the University of Nebraska at Lincoln, Baylor University in Waco, Texas, and in other settings across the nation.

Prof. Mattingly is a prodigal Texan who has never met a mountain he did not love. He is a music fanatic whose interests range from Celtic guitar (12-fret guitars, especially) to Russian chant. His wife, Debra Bridges Mattingly, is a public librarian in Anne Arundel County, Md., and they have two children, 24-year-old Sarah Jeanne, and 19-year-old Frye Lewis. The Mattinglys are members of Holy Cross Orthodox Church in Linthicum, Md.