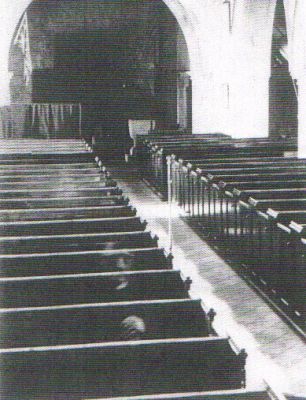 What we do, why we do it

Day after day, millions of Americans who frequent pews see ghosts when they pick up their newspapers or turn on television news.

They read stories that are important to their lives, yet they seem to catch fleeting glimpses of other characters or other plots between the lines. There seem to be other ideas or influences hiding there.

One minute they are there. The next they are gone. There are ghosts in there, hiding in the ink and the pixels. Something is missing in the basic facts or perhaps most of the key facts are there, yet some are twisted. Perhaps there are sins of omission, rather than commission.

A lot of these ghosts are, well, holy ghosts. They are facts and stories and faces linked to the power of religious faith. Now you see them. Now you don’t. In fact, a whole lot of the time you don’t get to see them. But that doesn’t mean they aren’t there.

I want to show you an an example — a case study, if you will — of what I am talking about, a ghost in a set of stories that is related to this blog that you are visiting (and we hope you come back often).

But first let me introduce myself. My name is Terry Mattingly and I am a journalist who covers religion news. For the past 17 years I have written the national “On Religion” column each week for the Scripps Howard News Service in Washington, D.C. I also direct the Washington Journalism Center at the national headquarters of Council for Christian Colleges and Universities on Capitol Hill.

I will be writing for this blog pretty much every day. The founding editor of the site is my colleague Douglas LeBlanc, another veteran journalist who has covered religion in the mainstream and religious press. In recent years, he has been best known as an associate editor of the respected evangelical news magazine Christianity Today.

Between the two of us, we have been covering religion news in secular and sacred media — or trying to convince editors to pay us to do so — for almost 50 years. We write religion stories and we read religion stories. Lots of them. That’s how we start our days and often that’s how we finish them.

We see all kinds of things and so do our many friends in academia, think tanks and the blogosphere. In this project, we are working with the Oxford Centre for Religion and Public Life and a philanthropist who — with the bylineRoberta Green — is herself a journalist with solid, national-level experience on the religion beat in mainstream newspapers. Click here to read a speech in which she discusses her own motivations for continuing to work on issues of education, mass media, journalism and culture.

But back to the “ghost” issue. Here’s that example I was going to tell you about.

Like many people who live far from New York City, my morning email includes the digital newletter version of The New York Times. So I was scrolling along and ran into this:

RIYADH, Saudi Arabia, Nov. 11 They were neighbors and newlyweds, and late on Saturday night they bumped into each other by chance outside the obstetrician’s office.

That is how Dany Ibrahim and Houry Haytayan found out that the blushing couple who lived next door were also expecting their first child.

It was your basic, solid symbolic person story, a snapshot from the age of terror. I was especially interested in finding out who the authorities thought planned and executed this bombing and why.

The details were, of course, sketchy. But the newspaper of record had to find the pattern that would help readers make sense of this.

Of the 17 dead, 13 have been identified. A Saudi police investigator at the scene on Tuesday said one of the four unidentified bodies might have been that of a suicide bomber inside the sport utility vehicle.

Mr. Ibrahim, the young Lebanese husband, lived in Beirut through the 1970’s and 1980’s when it was racked by civil war. Somehow this is different. He specifically picked this compound to move into six months ago, after the suicide bombings in May against Western compounds, because he thought it would be safer to live in a place that was almost entirely Arab and Muslim.

It was safer to live in a neighborhood that was almost entirely Arab and Muslim. But it was not safe.

So I kept reading and, later, I found this.

By ESTANISLAO OZIEWICZ
From Wednesday’s Globe and Mail
POSTED AT 5:40 AM EST Wednesday, Nov. 12, 2003

Nina Jibran had everything to live for. The Lebanese school teacher was recently married, pregnant and living in a comfortable compound in Riyadh.

There was even talk of her moving to Canada with her husband, an engineer who worked for a multinational advertising agency.

But then, shortly after the couple returned home from an obstetrician’s appointment last Saturday, a suicide bomber ripped through the gates of their residential area, shredding their lives and sparking outrage in Saudi Arabia. Ms. Jibran was among the 17 dead, and her husband, Eliyas, among the more than 120 injured.

Scanning down, I found this newspaper’s version of the crucial, defining paragraphs:

As details emerge about the victims of last weekend’s bombing, many observers believe their profile made them targets for the suspected al-Qaeda attack. Ms. Jibran, like her husband whom she married in July of 2002, was Christian. According to Arabic-language news reports, they had also received documentation to move to Canada.

Elias Bijjani, a Toronto-based member of the Lebanese Canadian Coordinating Council, said many of the couple’s neighbours were also Lebanese Christians. He speculated al-Qaeda was targeting Christian Arabs, rather than Muslims.

In fact, the evidence seemed to be that the victims were Arabs, but they were Arab Christians.

The wording in the New York Times story did not eliminate that possibility, but it also did not provide that specific information. In fact, it would turn out that it was hard to explain the location of the attack in any terms other than an attempt to kill a specific form of “infidels” — Arab Christians.

Why was that information missing? What was the origin of this ghost?

I immediately did what I do several times a day. I sent pieces of these stories and the URLs around to a circle of friends — journalists, human rights activists, politicos, etc. You know, the usual cyberspace circles. We all have these private circles, right? Mine just happen to care a great deal about religion and the news.

Before long, an interesting thing happened. One of these cyber-colleagues — Dr. Paul Marshall of Freedom House, which studies religious liberty issues — took an interest in these two stories. Then he took this case study to another level.

The result was this essay for The Weekly Standard:

What you weren’t told about their targets in Saudi Arabia.

AMERICAN REACTIONS to the recent bombing of a foreign workers’ compound in Riyadh reveal multiple misreadings of the Arab world and — more dangerously — of both al Qaeda and the Saudis.

The media seem to equate Arab with Muslim and, along with some in the administration, think that al Qaeda’s war is against Americans and Westerners per se, rather than against all “infidels,” a group al Qaeda defines idiosyncratically and expansively as anyone who is not a strictly observant Muslim. Both mistakes are compounded by reliance on the Saudis’ distorted account of the attack.

The November 8 bombing took place in a Lebanese Christian neighborhood of Riyadh, and of the seven publicly identified Lebanese victims, six were Christian. Lebanon’s newspapers are replete with photographs of Maronite Catholic and Greek Orthodox victims. Daleel al Mojahid, an al Qaeda-linked webpage, praised the killing of “non-Muslims.” The Middle East Media Research Institute quotes Abu Salma al Hijazi, reputed to be an al Qaeda commander, as saying that Saudi characterizations of the victims as Muslims were “merely media deceit.”

If so, the media fell for it.

Marshall and I had seen the same ghost. He chased it down and captured it in print.

And that is what we hope to do with this blog. It is an experiment by LeBlanc and myself and, we hope, our journalist friends and new readers. We want to slow down and try to pinpoint and name some of these ghosts.

But I don’t want to sound like we see this as a strictly negative operation. There are many fine writers out there — some believe the number is rising — who are doing an amazing job of taking religion news into the mainstream pages of news, entertainment, business and even sports. We want to highlight the good as well as raise some questions about coverage that we believe has some holes in it.

Most of all, we want to try to create a clearing house of information and opinion on this topic. This is what blogs do best.

So this is why Doug and I started this experimental blog. We hope it grows. We hope it forms links with other sites that are digging into the same issues, each with their unique viewpoints and resources. We will point some of those out as well and include them in our links page.