Every fan of Bible trivia knows that this is the shortest verse in the Bible (though not many could tell you it’s John 11:35).  This morning, I’m going to write about 1000 words on just 2 words: “Jesus wept.”

Jesus wept.  This is an extraordinary statement.  Knowing with Martha that Jesus is the Messiah and the Son of God, knowing that He is fully capable of raising the dead to life, we read that Jesus wept.

Let’s try to put ourselves in Jesus’ place.

So why does Jesus weep?  Surely there is something significant about Jesus here.  Jesus weeps in the first place because Mary was at His feet, weeping for her dead brother.  The Jews are weeping with her also.  As a result, Jesus groans in His spirit and was troubled.

As Jesus travels to the grave, He now not only groans but He weeps.  Jesus weeps.  He weeps because His friend Lazarus is dead, but why would He do that, knowing that He will raise Lazarus to life in a few minutes?  He weeps because death is always painful, especially to the Son of Man.  The truth is that Lazarus was truly dead (he stinketh), and that pains Jesus.

But I think there is much more at work here.  In meeting Lazarus’s death, Jesus meets His old Enemy – Death.  Not just the deadness of a man who shall shortly be alive but Death itself.  Here is Jesus, Who Is the Resurrection and the Life, locked in mortal combat with Death.  Here is Jesus coming to grips with the Death that is the wages for the sins of the whole world.  Here is Jesus, setting His face like flint toward the Cross.  Here is Jesus, so sympathizing with the death of Lazarus and the death of humanity that He feels it.

This love from One Who Is Love is to be our love.  This is why it matters that Jesus wept.

As Jesus came to the cave which was a grave, He groans within Himself for a third time.  He does this after some of the people say, “Could not this Man, who opened the eyes of the blind, also have kept this man from dying?”  Here is perhaps a third reason why Jesus weeps and groans: He knows the pain and suffering that is necessary to save a world of pain and suffering.  He knows that though He is God, those made in His image will continue to suffer and die – until He suffers and dies for them.  Even then, their sufferings and deaths will continue until the end of time and the final death of Death.

This cry of the Jews, “Could not this Man, who opened the eyes of the blind, also have kept this man from dying?” is similar to the taunts of the Jews to Jesus when on the Cross: “He saved others; Himself He cannot save.”  It pains Jesus that the means by which Sin and Death will be defeated is through His own suffering and death and through the suffering and death of His disciples, as they are united to Him.  “Let us also go, that we may die with Him”

After the groaning and weeping, however, Jesus raises Lazarus from the dead.  He cries out with a loud voice, “Lazarus – come forth!”  And Lazarus, though he is dead, obeys!

Lazarus, of course, is a picture of us.  We are all Lazari: we are all dead and are ourselves the cause of suffering and death.  But when the Lord who loves us weeps and groans over us, He calls us out of the grave.  He calls us to die to ourselves that we might be united to Him Who Is Life.

About the stinking.  Since Lazarus was truly dead, he truly began to stink, being dead four days.  Now once Jesus gave him back his life, he probably stopped stinking.  But I think it’s different for us.  I think that we still stink because we still sin.  And yet Jesus loves us and draws near to us anyway.  It’s like changing a dirty diaper: the diaper doesn’t stink any less because it’s one of my own kids’ diapers, but because of my love for them I don’t seem to mind very much (except when it’s a #3!)

The love of Jesus for Lazarus is a lesson in His amazing love for us.

Let us, like Thomas, go, that we may die with Him.”

Let us, like Martha, run to meet Him whenever and however He comes.

Let us, like Lazarus, come forth and live when He calls us to new life with Him.

Prayer:  Grant, O Lord, that as we are baptized into the death of thy blessed Son, our Savior Jesus Christ, so by continual mortifying our corrupt affections we may be buried with him; and that through the grave, and gate of death, we may pass to our joyful resurrection; for his merits, who died, and was buried, and rose again for us, the same thy Son Jesus Christ our Lord.  Amen.

Resolution:  I resolve to meditate on the love of Jesus for Lazarus, who is me, today.

February 24, 2016 Saturday of Lent 2 - John 11:45-57
Recent Comments
0 | Leave a Comment
Browse Our Archives
get the latest from
Give Us This Day
Sign up for our newsletter
POPULAR AT PATHEOS Evangelical
1

Evangelical
John 12:1-11 - The Bethany Trinity
Give Us This Day 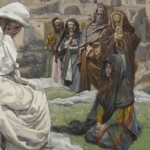 Evangelical
John 11:17-27 - The Resurrection of Martha
Give Us This Day