Greet One Another With a Holy Kiss

Greet One Another With a Holy Kiss November 20, 2017 Fr. Charles Erlandson 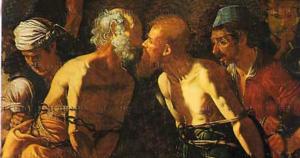 Romans 16 is one of those chapters that’s sort of like kissing your sister (no offense, Linda.)  It’s just not as glamorous and romantic as everything else.  It’s one of the forgotten chapters of the New Testament and of the book of Romans.  After St. Paul’s theological tour de force which winds down in Chapter 14 and seems to fizzle out in Chapter 15, we arrive at Chapter 16 and find a bunch of names.  In fact, we find a whole chapter of names.

Even more strange, we find a curious use of the word “greet” 24 times in one chapter.  Considering that Paul’s letter to the Romans was written to a church he did not help found and one that he probably hadn’t visited at the time of his writing, it’s startling that Paul spends a whole chapter greeting the saints – more time than he spends in the letters he writes to churches where he had spent more time.

After all Paul’s incredible theological discussion, he ends his massive missive with a very different kind of theology, what we might call the theology of the holy kiss.  As I read Romans 16, an image of the Body of Christ is created before my very eyes.  What I see is not a list of names that some guy named Paul once knew but a picture of a living, breathing, Body.  It’s the Body of Christ that is referenced so often in the New Testament but which is here pictured for us in a different way.

Paul’s theology is a single garment: Romans 1 and 16 are related to Romans 2-15. All of Paul’s dense polemical theology is useless without the applied and implied theology of Romans 16.  What difference does all of this make if it is not lived out in the Body of Christ?

As if to make sure that you and I don’t misunderstand his theology of the rest of his letter, Paul writes in Romans 16:17-18, “Now I urge you, brethren, note those who cause divisions and offenses, contrary to the doctrine which you learned, and avoid them.  For those who are such do not serve our Lord Jesus Christ, but their own belly.”

Could it be that greeting one another with a holy kiss and maintaining the unity of the Body is as important as understanding justification by faith or the sovereign grace of God?  Is it possible that our ancestors who fought the religious wars of earlier centuries had it wrong?

I’ve been listening to an audiotape of Simon Schama’s A History of Britain.  I’m up to the era after the English Civil War and the period of the Commonwealth.  While I admire Oliver Cromwell in some ways (he seems, for example, not to have used his immense power for his own advancement), the narrow mindset of Cromwell, of many Puritans, and of the Independents of the time seems to be what St. Paul has in mind.  Sadly, a puritanical pursuit for an immaculate uniform theology often divides the church.

I’ve seen this at work in certain Reformed theology circles.  For several years I was a student of Reconstructionist theology.  To this day, my Christian mind has been unalterably changed for the better by some of the Reconstructionist books I read.  I recognized that a pietistic theology that only concerns itself with the self can be a kind of idolatry and heresy, and I learned to try to apply my faith to every area of life.  I gained a new love of the Old Testament and profited in many other ways.

However, I began to smell a rat when I began noticing how those who were Reconstructionists seemed to be antagonistic towards every other Christian, those poor benighted souls who just “didn’t get it.”  Around the time I met my bride to be, Jackie, she had two friends, Ralf und Andres, who had come all the way from Germany to come to Westminster Presbyterian Church and study at Geneva Divinity School.  They had read a lot of Reconstructionist books and made the pilgrimage to Tyler, Texas, once the center of Reconstructionist theology.

To their surprise, they found that Westminster Presbyterian Church was now Good Shepherd Reformed Episcopal Church and that Geneva Divinity School was now defunct.  After about 6 weeks of a book study I was leading, they suspected that the author of the book (Jim Jordan) and I were both heretics, and they quit the study.  They spent the next 2 years bouncing back and forth between the U.S. and Germany, trying to determine which one was more demon-infested.  No wonder they went around muttering to themselves, “Ja, ja, I am in k-r-r-isis!”

As Schama said, concerning James I’s attempt to create a united kingdom, an obsession with unity and uniformity guarantees schism and hatred.  The Body of Christ would do well to observe this principle.

In order to see the Body that Paul portrays in Romans 16, we’ll have to practice reading theology in a different, less systematic, way.  Once we do, an amazing portrait emerges, person by person.

Jesus Christ is, of course, the head of the Body, wherever His Body may be found, but it’s important to notice that while Christ is in heaven His head is represented by His hand-chosen apostles.  They are the first bishops around which the unity of the church was established.  Writing to Rome, it looks as if all roads lead to Paul.

Each name that Paul mentions appears like an organ listed in a table of the organs of the entire body, each playing its essential role in the healthy functioning of the church.  Those Paul greets are all his fellow workers, those who as the Body of Christ work with him to build up the Body of Christ and be the presence of Christ to the world.  Paul greets Priscilla and Aquila, fellow workers who risked their necks to save Paul’s life.  They are perhaps the most impressive of the saints listed not only because they risked their lives to save Paul’s but also because there was a church that met in their house.

God is probably not asking you today to save anyone’s life from death, but in what ways may He be asking you to minister in a lesser way to a saint of God, a part of the Body of Christ?  Many of you would rearrange your lives and boldly jump up to risk your life to save another’s, and yet we balk at lesser tasks.  We are like Naaman who despised the simple washing away of his leprosy and sin that God prescribed, in contrast to the heroic good work he wanted to perform.

Here we find Phoebe, a servant of the Lord from another church, the one in Cenchrea.  Phoebe was first and foremost a servant, one who served the saints of God.  This kind of loving, self-giving service usually does more to unite the Body than all the heavy tomes written on Paul’s theology in Romans.  This Phoebe was a helper of many.  You may not know what she did to help many, but I’m sure you can think of many ways to help many in the Body of Christ.  Because she was a servant of the Lord, the Body of Christ in Rome was to receive her as a saint and to assist her in whatever business she had need of them.  Paul’s picture is of a Body, a family, in which each serves the other so that they are knit together into one living Body where there is little me and a lot of us.

We find those such as Mary, Tryphena and Tryphosa, and others who are to be greeted because they labor in the Lord.  The emphasis on being laborers with Paul in the Body of Christ is striking.  The saints of Romans 16 are not commended for having a correct understanding of Paul’s doctrine but for serving the church, risking their lives, and laboring faithfully.

The saints you should especially greet with a holy kiss in your life are those who are – guess what? – serving the church, risking their lives, and laboring faithfully.  More than this, you are to be worthy of a holy kiss yourself.  You are to be the one who serves the Body of Christ, who is willing to risk your life for Christ and His saints, and who labors diligently in God’s Kingdom.  None of these take the place of a true knowledge of God and His salvation, but a true knowledge of God and His salvation cannot exist without these.

Practice being worthy of the holy kiss of Christ, while not neglecting to learn true theology.

Prayer:  To You, O Father, who are able to establish us according to the gospel and the preaching of Jesus Christ, according to the revelation of the mystery kept secret since the world began but now made manifest, and by the prophetic Scriptures made known to all nations, according to the commandment of the everlasting God, for obedience to the faith—  to God, alone wise, be glory through Jesus Christ forever. Amen.

Resolution:  I resolve to meditate on and consider one way to serve the Body of Christ this week, paying close attention to the ways in which the Spirit may be speaking to me. 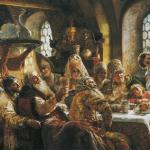 October 29, 2017
What Do We Mean by the Communion of the Saints?
Next Post

March 28, 2018 Good Friday - Suffering as a Means to Union with Christ
Recent Comments
0 | Leave a Comment
Browse Our Archives
get the latest from
Give Us This Day
Sign up for our newsletter
POPULAR AT PATHEOS Evangelical
1

LCMS-Related Christians Charged for Teaching the...
Cranach
Related posts from Give Us This Day 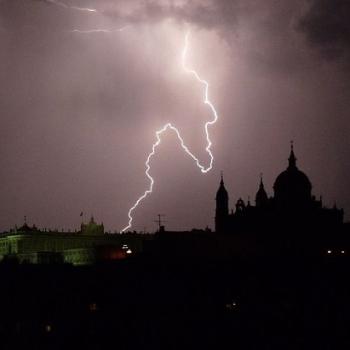 Evangelical
Why Do We Hide From Romans 1?
Give Us This Day