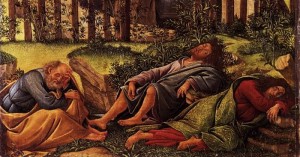 Have you ever had a crisis in your life that forced a clarity and simplicity into your life so that suddenly your priorities became crystal clear?  It might have been a death in the family, the loss of a job, the birth of your firstborn, your marriage, etc.  At such moments, we forget about all of the fluff and frivolity, and all of those little things we worried so much about are revealed to be cosmically insignificant.  Sometimes, during such moments, or the respites that occur within them, we’re able to recognize our folly.  We might even make half-hearted vows never to return to a life in which we major on the minors.

Or maybe you’ve had a similar revelation be precipitated by the act of moving, and you realize that so much of the stuff that you’ve accumulated over the years never really got used and isn’t worth the effort to take with you.

This shock of recognition of the real value of things and the real priorities in life is exactly what you’re supposed to experience in today’s passage.  At the beginning of Luke 12, we find Jesus hammering the Pharisees once again because they are hypocrites (once again).  We feel a little uncomfortable perhaps but still relatively safe.  And then, at least for me, Jesus suddenly gets very personal.

I imagine this scene as a movie in which an innumerable multitude of people has gathered around Jesus.  Luke has hired a cast of 1000s for this scene, and in the middle we see a shot of Jesus, a little closer up now and without the entire multitude in view, teaching against the hypocrisy of the Pharisees.  Suddenly, Jesus turns to the camera which is shooting a close up of Him, and He says to you, the viewer, “For there is nothing covered that will not be revealed, nor hidden that will not be known.”

Suddenly, I feel less comfortable and safe.  Suddenly, I feel naked, and I am revealed for who I am.  When Jesus turns to me and says this, I understand in an instant that He is really the one watching, and I am the show.  He’s been watching to see how this disciple of His is doing.  Though He watches unobtrusively and incognito, one day I’ll realize that He was watching all along.

It’s at such moments that a man realizes he’d better face His Lord now, while there is still time, and not later.  For “Whatever you have spoken in the dark will be heard in the light, and what you have spoken in the ear in inner rooms will be proclaimed on the housetops.”  It reminds me of the TV show Cheaters, in which spouses hire private investigators to see if their spouse is cheating on them.  What is said in the inner rooms is revealed, and in the end, there is no place to hide.

When we realize that Jesus Christ has been watching all along, we rightly feel ashamed.  But rather than letting the crisis pass and return to our former life, like a dog returning to its vomit, we should return to our lives transformed by our encounter with Jesus.  We should take the steps necessary to truly repent, even when no other human is watching.

Often, this sudden realization about the true meaning of life (which is life in the presence of our holy, Almighty God) makes us focus on our sins of commission.  What things have we done of which we should be ashamed before Him?  But He is also watching our sins of omission.  We should also be ashamed of the things He’s asked us to do that we have not done.

The camera pulls out and returns to a mid-range shot in which we see Jesus and some of the multitude again, as He begins to talk about fearing God.  He speaks of the Father’s care for us and of sparrows and the hairs on our heads.

And then comes the close up, and Jesus turns to look you in the face again.

These words are even more bone chilling, spine tingling, and hair-on-my-head-that-has-been-counted raising than the words about things being revealed.  He has given you many opportunities to confess Him before men: how have you been doing?  He’s been watching you, you know.  And He’s not just asking about whether or not you’ve gone to church and recited the Creed or said whatever words you say in church.  He’s also talking about how you confess or refuse to confess Him in the rest of your life.

At your place of employment, does anyone have a clue you’re a disciple of Jesus Christ?  Do your neighbors know you to be a Christian?  When you hang out with your friends, what things do you love to spend your time talking about?

The disciples present with Jesus in the 1st century faced the threat of being hauled before the synagogues and magistrates, only to be kicked out of the synagogues potentially.  They faced the threat of rejection by parents and children, neighbors, employers and fellow employees, and by society in general.  These are the people He is telling to confess Him before men: those who have a real threat of serious consequences.

But He is also looking at and speaking to you.

And so the movie ends, the book closes, and you’re left with an impression and an idea.  What will you do with the knowledge that Jesus Christ is watching you?  One day, you won’t have to imagine anymore because you’ll appear before Him in person, giving an account of what you’ve done.  You won’t have the excuse that you had no idea or that you got distracted.  You’ve been warned, and you’ve had plenty of reminders.

This is a serious lesson today, but I know how easy it is to fall asleep.  I’ve been discovering and re-discovering how often my children are actually distracted in our evening prayers.  Often, from prayer to prayer, even after just being reminded, they fail to pay attention.  And we’re the same way.

One thing that helps, if you find it hard to imagine Jesus Himself, is to imagine that one of the saints is watching you.  Occasionally, I used to imagine that my Grandpa Jones was watching.  Would he approve of what I’m doing?  To this day, sometimes I hear the voice of my Mom, or actually have a vague, ethereal sense of her presence (Hi, Mom!)  I imagine what my Mom would say, so that even when I’m writing Give Us This Day I have to mind my P’s and Q’s because I know she reads each and every word and might wonder about some of the provocative language or images I use.

Holy Scripture is a daily reminder of the presence of the Lord in our midst, as are our prayers.  Make sure you’re paying attention, and remember that one day you’ll have to give an account.

Remember, as well, that this watchful presence of the Lord is also the presence of the One who has counted the very hairs on your head and desires to draw near to you and bless you.

Prayer:  Almighty and most merciful Father; We have erred, and strayed from thy ways like lost sheep.  We have followed too much the devices and desires of our own hearts.  We have offended against thy holy laws. We have left undone those things which we ought to have done; And we have done those things which we ought not to have done; And there is no health in us.  But thou, O Lord, have mercy upon us, miserable offenders.  Spare thou those, O God, who confess their faults.  Restore thou those who are penitent; According to thy promises declared unto mankind in Christ Jesus our Lord.  And grant, O most merciful Father, for his sake; That we may hereafter live a godly, righteous, and sober life, To the glory of thy holy Name.  Amen.  (The General Confession from The Book of Common Prayer)

Resolution:  I resolve to find one way to remind myself of the watchful presence of the Lord in my life.

Botticelli – The Agony in the Garden – U.S. Public Domain

April 4, 2017 Luke 12:13-21 - Greed
Recent Comments
0 | Leave a Comment
Browse Our Archives
get the latest from
Give Us This Day
Sign up for our newsletter
POPULAR AT PATHEOS Evangelical
1

From Theistic Evolution to Intelligent Design:...
Unbelievable?
Related posts from Give Us This Day

The Holiday Season, and Precious Times with Our...
Last December, in that pretty normal year called 2019, our daughter Karina...
view all Evangelical blogs
What Are Your Thoughts?leave a comment
Copyright 2008-2020, Patheos. All rights reserved.