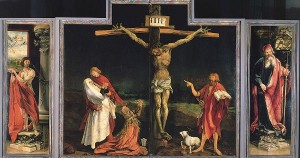 Jesus Christ has redeemed mankind by the entirety of His life and ministry. This redemption is seen everywhere and has worked its way into the DNA of humanity in ways that few perceive. The kind of liberty that many people in many nations experience is, ultimately, a fruit of Christianity. The dominion of nature and the quest for understanding God’s creation that has led to so much material progress is also one outworking of the redemption of mankind.

One of the most remarkable things about the contemporary world compared to the ancient world is the place of honor now given to women. We give great honor to the Greek philosophers that are an important part of our Western heritage. Here is what the great philosopher Demosthenes (who is representative and not a radical) had so say about women: “we have courtesans for the sake of pleasure; we have concubines for daily cohabitation; and we have wives to bear children and manage the household.”

You would expect that the Jews at the time of Jesus would have a remarkably better view of women. Yet in the past, the Jews considered a woman not a person, but property. In their morning prayer service, men prayed: “Thank you God for not making me a Gentile, a woman or a slave.”

Contrast this with the place given to women by Jesus Christ. What a bizarre beginning to the life of one who is called the Messiah, the Christ, and the Son of God! How outrageous it must have seemed to the ancients that the mother in the story gets more attention than the father! In this way, Mary is the forebearer of the exaltation of women that Jesus Christ would bring. In this way, Jesus would undo the curse put upon women by Eve’s disobedience.

Consider the genealogy of Jesus the Christ found in Matthew’s Gospel. Here we find four odd names: Tamar, Rahab, Ruth, and Uriah’s wife. What all of these four names have in common is that they are the names of women, and not just women but tainted women. Being a woman in ancient times was low enough, but to be a tainted woman?! Tamar sleeps with her father in law; Rahab is a prostitute; Ruth is a foreigner; and Bathsheba (Uriah’s wife) sleeps with King David.

And yet God has grafted them into His family and into the family line of His Son.

Have you ever wondered how Jesus and the disciples had the resources to travel around for three years without full-time jobs? The answer is “Women.” In Luke 8:2-3 we read that not only the 12 disciples traveled around with Him but also “certain women who had been healed of evil spirits and infirmities – Mary called Magdalene, out of whom had come seven demons, and Joanna the wife of Chuza, Herod’s steward, and Susanna, and many others who provided for Him from their substance.”

All throughout the New Testament, you see, women are exalted from their previous humble position. And then we come to the Crucifixion. The disciples have fled, and who do we find heroically watching the Crucifixion (from a distance)? The women! “There were also women looking on from afar, among whom were Mary Magdalene (another prostitute), Mary the mother of James the Less and of Joses, and Salome, who also followed Him and ministered to Him when He was in Galilee, and many other women who came up with Him to Jerusalem” (verses 40-41).

What did these women see? They saw the Son of Man humbled and then lifted up so that they who had been humbled as women might be lifted up. Though they did not yet understand, what they were witnessing was their own exaltation, and ours as well.

The Gospel writers’ restraint in giving the details of the Crucifixion is haunting. Instead of a six-hour blow by blow description, we read the following in Mark: “And when they crucified Him . . .” (verse 24). And that’s about it. No details about the sound the hammer in the nails through the flesh must have made. No description of the moment by moment agony and the drop by drop loss of blood. No gruesome by Matthias Grünewald or Mel Gibson.

And then: “And Jesus cried out with a loud voice, and breathed His last” (verse 37).

This is what the women saw. Has it ever occurred to you that most of the description of the Crucifixion and Resurrection came from the women? They had nothing to lose in staying by Jesus, except for Jesus Himself. They had left all else and put their entire hope and trust in Him.

And maybe that’s the lesson for today for all of us – women, men, and children: hope and humility.

No wonder Jesus said, “Blessed are the poor in spirit, for theirs is the kingdom of heaven.

Blessed are they who mourn, for they shall be comforted.

Blessed are the meek, for the shall inherit the earth.

Blessed are the pure in heart, for they shall see God.”

I wonder today if there isn’t a lesson for me, a privileged, well-fed man sitting in a comfortable house in the United States in the 21st century. Sometimes I wonder why I can’t see God very well. Maybe it’s because I’ve fled from Him, not out of fear like the disciples, but out of satiety. Maybe I haven’t properly estimated the lowliness of my position before God, and maybe I’ve returned back to my normal life just at the time when all the good stuff begins to happen offstage.

Don’t abhor, don’t flee from the painful parts of your life: for there, if you look closely, you will find your Lord. Don’t let the good things of this world go to your head so that you can no longer see the King of Glory who came to hang on a Cross.

And so it wasn’t only Jesus who died today, on Good Friday, here in Mark 15 but also the old world. The ancient world in which women were almost subhuman and not often treated with respect, honor, and love has died. Yes, it has taken centuries for this to be worked out in the world, but then so the Crucifixion, Resurrection, and Ascension have all been kneaded into the bread of our life.

When Christ died, He died for the sins of the world, including men’s sins towards women, women’s sins against men, and all of the other stupid, selfish, sinful things man has been doing for millennia. All of this – including the horror of domestic wars, the battle of the sexes, and all of the hellish horrors man is so fond of – is what Christ died for today.

At just the moment when it looks like all was lost, all was won. On Good Friday, the world was turned upside down, and so it’s only fitting that it is the women, and not the men, who remain to bear witness to this quiet revolution in the heavens.

May I have the love of a devoted mother. May I see myself, along with my Lord, as the abased and humiliated one. May I see myself as the demon-possessed prostitute delivered of both curses. And then, maybe then, I’ll see Him the way I want to see Him.

So today I want to learn from these wise and humble women to cling to Him, even, especially, when things are hard. I, too, want to look on as He is crucified so that I may look on when He is resurrected.

Look! There He is in your life!

Prayer: Today a tomb holds Him who holds the creation in the hollow of His hand; a stone covers Him who covered the heavens with glory. Life sleeps and hell trembles, and Adam is set free from his bonds. Glory to Thy dispensation, whereby Thou hast accomplished all things, granting us an eternal Sabbath, Thy most holy Resurrection from the dead.

What is this sight that we behold? What is this present rest? The King of the ages, having through his passion fulfilled the plan of salvation, keeps Sabbath in the tomb, granting us a new Sabbath. Unto Him let us cry aloud: Arise, O Lord, judge thou the earth, for measureless is Thy great mercy and Thou dost reign forever.

Come, let us see our Life lying in the tomb, that He may give life to those who in their tombs lie dead. Come, let us look today on the Son of Judah as He sleeps, and with the prophet let us cry aloud to Him: Thou hast slept as a lion; who shall awaken thee, O King? But of Thine own free will do thou rise up, who willingly dost give Thyself for us. O Lord, glory to Thee. Amen. (Orthodox prayer for Holy Saturday)

Resolution: I resolve to find one way today in which my Lord is asking me to crucify (humble) myself before Him that He might bring new life to me. 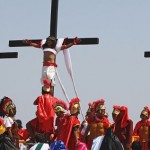 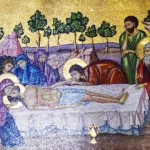 Were "Christianity's" Evil "Bullies" True Christians?
Roger E. Olson
Related posts from Give Us This Day

Evangelical
John 11:17-27 - The Resurrection of Martha
Give Us This Day