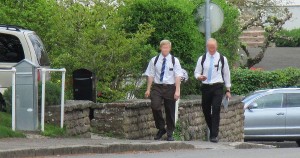 In this passage Jesus the Great Master sends out His disciples, in particular the 12, to go and be His presence in the world. Jesus knows that in His human form He is limited in space: He can only be in one place at a time. He also knows that His time is limited, for He knows the terrible mission He is on. Therefore, in keeping with the Kingdom parables He tells, He insures that His Kingdom will begin to grow and spread.

Because Jesus is God we may assume that He could just wave His hand and the work of spreading His Kingdom would happen automatically. But because He is also man, He has chosen to extend His Kingdom through His disciples and not apart from them. This is part of the meaning of the Incarnation: that Jesus Christ is redeeming mankind not apart from but through those He has come to redeem. Because the Church is the Body of Christ here on earth and because He has commissioned us to do the things He did while here on earth, we have a sacred ministry to spread His Kingdom.

There are three basic tasks that Jesus gives to the apostles. First, they are to proclaim the Kingdom of God, that it is here because King Jesus is here. Second, they are to proclaim the need for repentance because the King has come in judgment and in mercy: mercy for the penitent, but judgment for the impenitent. Third, the disciples are to heal the sick, including the spiritually sick.

Whenever we read such passages we are often distracted from the Master’s call on our lives by the specific details of the 1st century Israel setting. It would be easy to get caught up in trying to determine why the disciples were not to take anything for the journey except a staff and sandals. We could delve into the cultural implications of having the dust shaken off in testimony against someone. And sometimes these details are very helpful in understanding exactly what’s going on.

Other times, they have the effect of short-circuiting our ability to hear what Jesus Christ is telling us in America in the 21st century. “But I’m not an itinerant preacher! I don’t have a tunic or money belt or bag, and my last pair of Birkenstock’s wore out and I haven’t had a chance to replace them yet!”

The details of the first century situation are sometimes remote and sometimes not directly applicable. But we shouldn’t allow them to obscure the abiding spiritual principles of the Kingdom which are meant for us.

Are we supposed to go out, taking nothing but a staff and sandals? No.

But are we supposed to go out? Absolutely!

Are we supposed to go out 2 by 2 and risk being mistaken for Mormons or Jehovah’s Witnesses?

Not necessarily, and yet there may be wisdom in it.

Are we supposed to have the ability to cast out demons and heal the sick?

Most of us won’t.

Then what are we supposed to do?

Because we have confirmation from other passages of Scripture, we do know that we have been commanded to go to all the nations and make disciples. We know that we have an obligation to be ready in season and out of season to proclaim Jesus Christ. We are commanded to be prophets and proclaim Jesus Christ and His kingdom and the need for repentance. And we are to offer to heal the souls and minds and bodies of those around us using whatever technology and abilities God has given us.

Sometimes we use the cloak of the 1st century strangeness to absolve us of our obligation to obey our Master. In reading such passages, therefore, it is important to avoid two errors. First, don’t allow confusion over 1st century cultural details to cloud God’s abiding commandments to you. In other words, if you can’t figure out how staffs, bags, bread, copper, money belts, and sandals are relevant to you, it doesn’t absolve you from the task of being a prophet and evangelist.

Second, don’t attempt to slavishly follow every detail of the 1st century situation as if it is eternally normative. Just as you are not required to go about wearing a tunic and sandals and carrying a staff and money belt, you are unlikely to ever cast out a demon in your life. You are not required to give up your job and go out in pairs to knock on houses and act as itinerant evangelists. But you do have an obligation to tell others about Jesus Christ, to tell them that they need to repent, and to offer what help in their lives you can.

Having a better understanding of such passages, what are we waiting for? We have no excuse to not go out today and proclaim Jesus Christ and His Kingdom!

Prayer: Thank You, Father, that through Your Son, Jesus Christ, You have called me to Yourself and have sent me out to act as a minister of Your Kingdom in this world. Give me all that I need to tell others about Your Son and His Kingdom, to tell them about the need for repentance from sins, and to bring Your saving and healing grace to them. Amen.

Resolution: I resolve to consider one way that God is calling me to proclaim His Son and His kingdom in my life. I resolve to stand ready and obey when I hear His commandment to go. 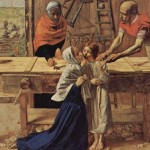 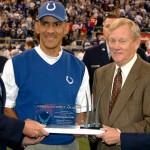 December 23, 2016 Mark 6:14-29 - The Courage of a Prophet
Recent Comments
0 | Leave a Comment
Browse Our Archives
get the latest from
Give Us This Day
Sign up for our newsletter
POPULAR AT PATHEOS Evangelical
1