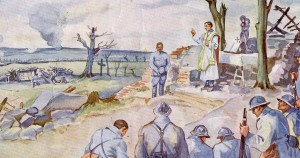 Growing up in Champaign, Illinois until the age of 10, I had a pretty idyllic, “Leave it to Beaver” childhood.  I remember thinking sometimes that life wasn’t all that good.  The sources of my “suffering”?  The teasing of my siblings, the Green Bay Packers team losing a game or the Chicago Cubs not winning the division title, or losing a spelling bee in school that I thought I should have won.

But when I compare what I thought was childhood suffering to some of the things that some of my students have suffered: shattering divorces; neglecting parents; broken relationships; sometimes even abuse  –  I find that what I thought was suffering doesn’t even compare.

In the same way, we sometimes make too much of the ways that people offend us.  But when we compare them to the size of how we have offended against God, we find that the offenses against us aren’t that large after all.

And that is the point of this morning’s lesson from our Lord: considering the magnitude of the sins that God has forgiven us, we are to forgive the small amount that others have sinned against us.

As Christians, we are to live in the Kingdom of Heaven.  This means that we are governed by the Rules or Laws of Heaven.  And in the Kingdom of Heaven, things work differently than in earthly kingdoms.  We pray, rightfully: “Thy will be done, on earth as it is in heaven.”  Through Jesus Christ, heaven has been brought back down to earth . . . that earth might be brought back up to heaven.

The process of salvation is one of man being made like God and re-created to live in His presence in union with Him forever.  Man is to be re-born into the image of Jesus Christ, the perfect man.

And so it is that as God has forgiven you, you are to be made like God and forgive those who have sinned against you.

The starting point is the forgiveness of God.  If we start here, the rest is easier.  And if we start with others’ trespasses against us?  We may never make it to the part about God’s forgiveness.

God is the master who has forgiven you much.  How much He’s forgiven us is something we always underestimate.  It’s hard for us to even understand the existence of our sins, much less how terrible they are against the one who is God.  I think a lot of Christians believe they make it through most days without sinning.  Wrong!  That just means you may not be very sensitive to the sins in your life.  This blindness to the sin in our lives is just one more measure of how much we have offended God.

This forgiveness of sins, however, isn’t automatic: if it were, we’d have to be universalists and say everyone goes to heaven and receives God’s blessed presence regardless of what they believe or do.  In the parable, the servant had to ask to be forgiven, and so must we.  God’s forgiveness comes only through the means He has offered: the life of His Son.  To be forgiven, we must accept salvation through Jesus Christ, which means acknowledging our sins and seeking forgiveness from God.  If we truly accept God’s forgiveness, offered only through His Son, then we must be made like the Son.

When someone’s wronged you and seeks forgiveness, do you think they truly seek forgiveness when they won’t look you in the eye?  When they say it without feeling, or with obvious resentment?  Then why would we expect God to truly forgive us, when we don’t come with a truly penitent heart and with humility?

But Jesus takes us even further into the heart of God.  It’s not enough merely to seek forgiveness: we must also seek to forgive those who have wronged us.  In the parable the servant also had to forgive: when he didn’t, he was punished.  Forgiveness by God is mysteriously dependent on our forgiving others.  Forgiving others is therefore not optional: it’s proof that we have been forgiven and have received the new spiritual life that comes only through forgiveness by God through His Son.

The main point of the parable, therefore, is to forgive as you have been forgiven.  For this reason we find forgiveness, God’s and ours, at the very heart of the Lord’s Prayer.  “Forgive us our trespasses, as we forgive those who trespass against us.”

Prayer, therefore, is a means to become like the Son.  If you call yourself a Christian, who are you to accept God’s immeasurable forgiveness and then refuse to forgive others their microscopic motes?

Are there some people you have not completely forgiven?  You are obligated to forgive them.  This is the clear commandment of God: you cannot refuse it.

This forgiveness, which is required for the Christian, is often a process, and one that must be repeated.  The 70 x 7 is not a limit by which we may come to an end of forgiveness but is representative of forgiveness without limit.  I, for one, am glad that God didn’t stop forgiving me at sin #471!

We shouldn’t be discouraged if we have to repeat this action of forgiveness.  How often have you had to seek God’s forgiveness for the same sin over and over?  Then we must forgive others this often, from the heart each and every time.  Forgiveness is, therefore, sometimes a process or a lifestyle, and not always a once for all thing.

Corrie ten Boom told of not being able to forget a wrong that had been done to her.  She had forgiven the person, but she kept rehashing the incident and so couldn’t sleep.  Finally Corrie cried out to God for help in putting the problem to rest.  “His help came in the form of a kindly Lutheran pastor,” Corrie wrote, “to whom I confessed my failure after two sleepless weeks.  ‘Up in the church tower,’ he said, nodding out the window, ‘is a bell which is rung by pulling on a rope.  But you know what?  After the sexton lets go of the rope, the bell keeps on swinging.  First ding, then dong.  Slower and slower until there’s a final dong and it stops.  I believe the same thing is true of forgiveness.  When we forgive, we take our hand off the rope.  But if we’ve been tugging at our grievances for a long time, we mustn’t be surprised if the old angry thoughts keep coming for a while.  They’re just the ding-dongs of the old bell slowing down.’

“And so it proved to be,” Corrie wrote.  “There were a few more midnight reverberations, a couple of dings when the subject came up in my conversations, but the force – which was my willingness in the matter – had gone out of them. They came less and less often and at the last stopped altogether: we can trust God not only above our emotions, but also above our thoughts.”

One of the most incredible movies I’ve ever seen is To End All Wars, which is based on a true story.  In World War II a Scottish regiment is captured by the Japanese  and put to work constructing a 400-mile long railroad.  They are treated brutally and harshly: many die.  Two views of how to deal with the situation emerge: Major Campbell, governed by revenge and hatred, wants to escape and kill their captors.  However, following the example of a POW named Dusty, Ernest Gordon (another POW) starts a secret school and spreads the explicitly Christian gospel of forgiveness.  One by one, the other POWs follow Ernie’s teaching of forgiveness.  In spite of the fact that Dusty himself is brutally murdered (actually crucified), the POWs learn to forgive their enemies and to sacrifice for one another.  This astounds the Japanese and gives hope and life to the POWs where they did not have it before.

These POWs had to give up their pride and their anger, and their revenge and hatred.  But they gained their souls, for in learning to forgive, they became like God Himself.

If you are having trouble forgiving, remember how much you have been forgiven. But if you have learned to forgive, then blessed are you, for you are acting like God, and are a child of God.

Resolution:  I resolve to completely forgive and receive forgiveness today, as God directs me. 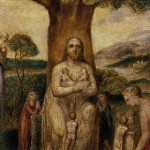 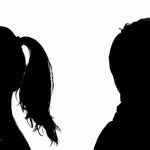 October 24, 2016 Matthew 19:1-15 - D-I-V-O-R-C-E
Recent Comments
0 | Leave a Comment
Browse Our Archives
get the latest from
Give Us This Day
Sign up for our newsletter
POPULAR AT PATHEOS Evangelical
1

Why Singing Hymns the Traditional Way...
Ponder Anew
Related posts from Give Us This Day 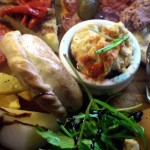 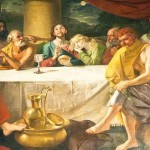