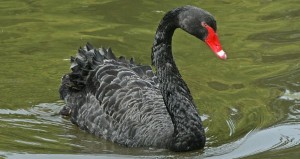 In 2007 a thought-provoking book titled The Black Swan was published.  It provides an insightful perspective into seemingly improbable events (i.e., a ‘black swan’) and our thinking that surrounds them.  The author, Nassim Nicholas Taleb contends that black swans underlie almost everything within our world but that we usually fail to acknowledge the possibility of a black swan event until after it occurs.  According to Taleb, most people focus only on things that we already know – or think we know – and that we generally fail to consider what we don’t know.  The result is that most people are not able to look beyond very narrow confines, and these severely limit their horizon.  Most people therefore are blind to the possibility of significantly large events.

And yet, as today’s lesson demonstrates, large, unexpected, significant events do happen.

There are three ways we might interpret today’s passage and others like it.  For reasons I’ve described (or will describe) in other Give Us This Days, I believe that historically speaking, Jesus is talking to His 1st century disciples about the things that must shortly happen, beginning with His Crucifixion, and continuing with His Resurrection, Ascension, and the destruction of the Temple and the Old Covenant.

Futuristically, this passage could be read in terms of Christ’s Second Coming.  Even though I don’t believe that’s what Jesus had in mind, the warnings about Christ appearing and no one knowing the day or hour could be applied to the Second Coming.

But as happens so often in writings on such passages, I don’t necessarily learn much about what such a passage might mean for me today.  If I look at what Jesus meant historically, I’m stranded 2000 years ago and reading about events that have already happened a long time ago.  On the other hand, if I look at Christ’s Second Coming, I’m looking at something that might not come for a very long time.  Millennial cults have been around for at least a millennia and, like the poor, will always be with us.  Of course, they’ve all been wrong.  And I kind of like the idea that the older Books of Common Prayer have a table that lets you calculate Holy Days until the year 8400!  (If you have a 1928 Prayer Book, you’ll find it on page lvii, right before Morning Prayer begins.)

But I am stuck here in the present, and even my discussion about the future in previous paragraphs is now in the past.  (Strangely enough, it might be in the present for someone who happens to pick up this Give Us This Day and is just coming to that part!)

What I mean is that the New Covenant, the Kingdom of Jesus Christ, has a past, a present, and a future.  The work of God in redeeming the world had an initial or definitive beginning 2000 years ago.  It certainly continues to have a progressive aspect as it is worked out in history, even as we live it in the present.  And it will, one day, have its final consummation in the future.  Like any good story, God’s story of redemption has a beginning, middle, and end.

And so here’s where today’s lesson applies to you and me.  I can’t claim to have figured out that Jesus Christ will return in glory and judgment on Tuesday of the 22nd Sunday in Trinity of the year 2008 (the day I first wrote this particular Give Us This Day).  But I do know that Matthew 24 sounds a lot like things that are going on in the world today (and as they have for 2000 years).  I do know that people are acting as they did in the days of the Flood.  They eat and drink and marry.  They grow up and get jobs, and they grow old and die.  Life is lived as if one day will be pretty much like the next, even as life gradually changes.

We’re all uniformitarians when it comes to our lives.  We pretty much bank on things being the same and their being safe and predictable.  And yet we know that life isn’t always like this.  We’ve all made important decisions that forever changed our lives.  We grow up and move out and go to college.  We begin the grand adventure called marriage and undertake the Herculean labor of being parents.  We know people who become desperately sick or die, or we have brushes with death ourselves.

At such moments we realize that life will not always continue the same way, day after day.  At such moments, I suspect that even the agnostics and atheists have their consciences pricked that maybe there’s more to life, and that this God person just might be real (and worse, might be something like what evangelical Christians say He is!)

Haven’t we all had moments where a foolish driver (maybe yourself!) drove in such a way as to jeopardize your life?  I can’t count the number of times when accidents have been averted while I was in a car, either as driver and passenger, and some of them rather serious ones.  In those moments, my heart becomes a rocket and tries to escape my ribcage and flee for his life.  I snap to attention, and everything else in life goes away for at least a few moments. Whatever problems I thought I had are instantly put into their proper perspective and are demoted to the category “minor”, for just a moment.

But after we turn out to be O.K., we go back to being uniformitarians and go back to life as usual.  We go back to the ultimate game of hot potato, the cosmic round of musical chairs, in which we continue to play the game of life, only dimly aware that at any moment that timer might ring and we might be the one with the hot potato in our hands or no chair to sit on.

And today, since you are here in the present, and Jesus is with you, He’s telling you to not go back to the game of life and your uniformitarian ideals.  Consider today’s Give Us This Day as a gentle wake up call (and don’t you dare hit the snooze alarm!)

“Watch, therefore, for you do not know what hour your Lord is coming” (verse 42).

Actually, I think I do know what hour the Lord is coming.  I think He’s coming right now.  No – I know that He’s already here.  Just because Jesus isn’t coming to finally separate the sheep and the goats and to judge the quick and the dead doesn’t mean that He isn’t coming and has not, in fact, already come today.

Maybe one of the best ways to read today’s passage is not only to fear the Lord because one day He will come in judgment but also to love the Lord who is already here in peace.

Prayer:  We beseech thee, Almighty God, to purify our consciences by thy daily visitation, that when thy Son our Lord cometh he may find in us a mansion prepared for himself; through the same Jesus Christ our Lord, who liveth and reigneth with thee, in the unity of the Holy Spirit, one God, now and for ever.

Resolution:  I resolve to allow the presence of the Lord change the way I live today. 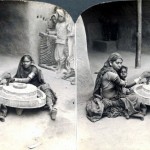 November 16, 2016 Matthew 24:42-51 - The Daily Grind Makes the Daily Bread
Recent Comments
0 | Leave a Comment
Browse Our Archives
get the latest from
Give Us This Day
Sign up for our newsletter
POPULAR AT PATHEOS Evangelical
1 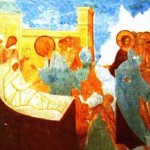 Evangelical
Luke 7:11-17 - God Has Visited His People
Give Us This Day 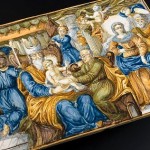