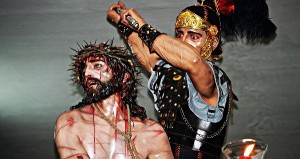 Whenever I used to see someone getting beat up or pushed around by a gang of people in the movies, like some of the many biker movies of the 60s I’ve seen, I have a visceral reaction.  I get mad or become sorrowful.  Something about the injustice of it all gets to me.  I have the same reaction when I see or hear about bullying in schools, a common occurrence.

But how does it feel when the Son of God Himself is the one being picked on?  What makes the bullying of Christ all the more startling is the knowledge that He could have chosen to do something about it if He wanted to.

It’s really remarkable how God could enter into human history, as one of us, and allow Himself to be so abused by us.  Knowing what we know of Jesus, it’s repulsive in the extreme and almost incomprehensible.  And yet here it is again, as we read about the Passion and Crucifixion of Christ one more time.

Everyone in the world seems to be joining in on this gang pummeling, torture, and execution.  And, in fact, we ourselves have joined in.  This, what we are witnessing today in Matthew 27, is the consequence of your sins and my sins and the sins of the world.  It started with the betrayal by Judas, one of the 12 whom Jesus had hand-picked and who had lived and traveled with Him for three years.  The hastily assembled Sanhedrin, the leaders of Israel – the high priest, chief priest, scribes, and elders – are next.  They falsely condemn Him, spit in His face and beat Him, mocking His prophetic nature.

The spitting part is personal to me.  I always looked up to my oldest brother Paul growing up.  He was 2 ½ year older than me (strange – he still is!), and he helped open up new worlds of knowledge, music, and movie-making to me.  But he was, like a lot of us Erlandsons, not at the top of the social heap in high school and might have fit into the nerd category.

One day when I (and I think my other brother was there as well) was up at the local elementary school with Paul, a group of high school students showed up.  They began giving Paul a hard time – I’m not sure why.  Bullies don’t really need a reason, except to make themselves feel superior.  They began taunting him.  One of them punched him in the chest and another spat in his face.  I remember wondering why he didn’t do anything about it but also knew that he couldn’t.  I felt sorry for him and humiliated as well.

And that’s how I feel today, reading about my Lord.  As if this weren’t enough, Peter, the Rock, denies Jesus three times and goes to lick his wounds.  Pontius Pilate passes Jesus around like a hot potato, doesn’t defend Him, and decides to send Him to be crucified.

But first, Pilate’s soldiers gather a whole garrison around Him and begin to mock Him.  They strip Him, put on a scarlet robe, and crown His head with a crown of thorns.  They mock Him as the King of the Jews, spit upon Him, and strike Him in the head with the reed that had served as His scepter.

Then the crucifixion itself begins, and He is treated as a criminal and crucified with criminals.  The people who pass by show no pity but blaspheme Him, asking Him to come down from the cross if He is the Son of God.

Where are we in this picture?  The disciples have all fled, and we were once among those who bullied Him.  We were among those who rejected Him and reviled Him.  We, by our sins, have had our part to play in the sad story we read today.  We were the ones who made His suffering and death necessary.

But no Christian can ever believe the story ends there: we know what this suffering and death are all about.  Knowing this, we still cannot help but be sobered by what had to happen.

And so, like Simon, we must take up His cross today.  Life isn’t always fair to us Christians, either.  Just as our Lord was reviled, we too will find that sometimes we are reviled.  As Christendom loses its hold on the U.S. and the Western world, we will see more and more that the world is a bully to Christians.  It’s remarkable that there was ever a time when this wasn’t clear and didn’t seem to be the norm.

There are some who will call us ignorant and intolerant and accuse us of hypocrisy and many other things.  And even if we don’t face immediate hostility or persecution, there are any number of ways in which this fallen world can seem to bully us.  Life itself seems to be the greatest mocker, sometimes whispering and sometimes shouting that if Jesus Christ really is God then why doesn’t He come down and make everything right?  If He truly is God then why doesn’t He deliver us out of all our difficulties?

I myself wish that all were immediately right with the world and that the bullyings and injustices of the world would cease this moment.  It didn’t stop for Jesus, not before He had been bullied, tortured, and killed, and it won’t stop for us, either, not during this life.

Why do we expect that Jesus had to suffer for us but never suspect that we might have to suffer for Him?  In this life, we will have to carry a cross.  It can either be the one that justly crucifies us as criminals or the one that we carry with Jesus that crucifies the Old Man so that the New Man may live in us.

Take heart today, therefore, in the bullying and mocking of the world and in the cross that has been assigned to you today.  As a Christian, that bullying and mocking and that cross are no longer means of torture and punishment.  Instead, they have become the means of being united to your Lord.

Prayer:  O God, you know us to be set in the midst of so many and great dangers, that by reason of the frailty of our nature we cannot always stand upright: Grant us such strength and protection as may support us in all dangers, and carry us through all temptations; through Jesus Christ our Lord.

Almighty God, whose beloved Son willingly endured the agony and shame of the cross for our redemption: Give us courage to take up our cross and follow him; who lives and reigns for ever and ever.

Almighty God, whose most dear Son went not up to joy but first he suffered pain, and entered not into glory before he was crucified: Mercifully grant that we, walking in the way of the cross, may find it none other than the way of life and peace; through Jesus Christ your Son our Lord.  Amen.  (Prayers from The Book of Common Prayer)

Resolution:  I resolve to carry my cross for Jesus today, whatever that cross may be. 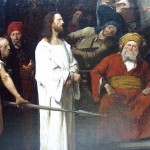 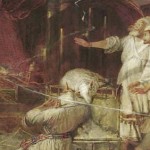 November 30, 2016 Matthew 27:45-56 - Christ wasn't the only thing that died on Good Friday
Recent Comments
0 | Leave a Comment
Browse Our Archives
get the latest from
Give Us This Day
Sign up for our newsletter
POPULAR AT PATHEOS Evangelical
1 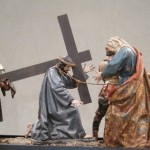 Evangelical
Luke 12:49-59 - The Price of Peace is...
Give Us This Day
TRENDING AT PATHEOS Evangelical

Chris Tilling's Paul's Divine Christology
C. Tilling, Paul’s Divine Christology, (Eerdmans, 2015, 336 pages). There are not...
view all Evangelical blogs
What Are Your Thoughts?leave a comment
Copyright 2008-2020, Patheos. All rights reserved.