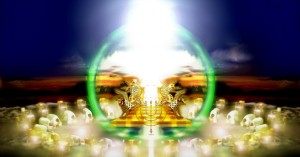 Have you ever met someone who had a commanding sense of authority?  An authority so great that everyone around silently took notice and responded to the mere physical presence of this person?

When I first began my career as a teacher my senior year in college as a student teacher, it became quite clear to me that I did not have It: that indefinable authority that certain teachers seem to have.  I had not yet developed the sense of self-confidence, or sense of presence, or The Look.

A few weeks into my student teaching, I was doing a lab in a physical science class.  I thought I was doing a pretty good job.  I was explaining things to the kids, hopping from lab table to lab table, keeping an eye on things – or so I thought.  The next day I learned, from the assistant principal, that he had caught two of my students in the hall, who had apparently escaped from my class during my lab.

I must have been a source of concern and amusement for my supervising teacher, Mrs. Colleen Holmes, for she seemed to have plenty of authority.  I began student teaching halfway through the year, and by that time Mrs. Holmes had those kids whipped into shape.  I was amazed when I sat in the first day in her class, and the kids were all sitting straight in their chairs.  No one ever talked: I wasn’t even sure I was allowed to!  No one moved, no one even fidgeted.  She made it look a million times easier than it was, because she had this sense of authority.  (For the record, it took me about two days for the kids to figure out they could walk all over me!)

We all understand authority in our lives, even if we sometimes resent it.  Someone has the right or power to direct the life of someone under him.  We’ve all had parents or other adults whose authority was so strong you could smell it.  Authority is a part of the created order: life wouldn’t even make sense without it

You may think you’re in charge . . . but you’re not.  You couldn’t create yourself, and you can’t preserve yourself, not without what God first provides.  Sometimes you can’t even control your own body, thoughts, or feelings.

When I used to teach Government, I taught that there are two kinds of authority: positional and personal.  As I became a wiser and better teacher, I tried to achieve the miraculous: to have both kinds of authority in relationship to my students.  Some teachers tried to have only personal authority and became too much of a friend to their students.  Others cared only about having the positional authority, the right to tell others what to do.

In Matthew 8, the centurion certainly understood positional authority.  He says, “I am not worthy.  For I am a man under authority, having soldiers under me.”  He was a man with authority over 100 Roman soldiers.  He knew what it was to order men around and to be ordered around.  And so he made this wonderful analogy: he saw that his own authority proved the greater authority of God.  Too often, man is tempted to look at his authority over creation or the animals and think that he is God.  With the continuing, almost magical advances of technology, this delusion is perhaps even greater than before.

But God has the ultimate positional authority.  I shouldn’t have to spell this out, but here goes.  God is, well, God.  It’s a mistake to think that we are like God, or that God is as we are, only maybe like a Superman.  He’s not our buddy and equal: He is the Lord of Lord and King of Kings; the Maker of Heaven and Earth; and God Almighty!

And your job . . . is to acknowledge the authority of God.

It’s not enough to have only positional power.  We could serve God because He is a very powerful tyrant or because He’s a big bully.  But God also has personal authority, because of His character.  When I taught the first group of seniors at All Saints Episcopal School in Tyler, TX, who wanted only to cut up in class and make the classroom a hell for their teachers, it wasn’t my positional authority that won them over: they wanted to rebel against that.

I made it a point to sit with them at lunch.  I responded to them as real people in the classroom.  I showed them that I was really on their side.  By the end of the year, I had gained a personal authority with them, and they became more willing to do what I asked them to do.

So how can you adequately respond to such a great God?  What can we mere humans do to acknowledge the God whose positional and personal authority over us is without limit?  If you begin with God’s greatness and authority, then you must continue by responding with humility: if you want to be great in the Kingdom of Heaven, learn to be the servant of all.  Authority in God’s Kingdom comes through humility, by bowing before God and recognizing that all authority belongs to Him.

The centurion’s servant could never have been healed by the centurion himself.  All of the

broken and sick things in life we most want to be made better are things we cannot fix ourselves.  And, therefore, we come to God’s authority because of His power, but also because of His love (personal authority).

You should come with obedience.  Every time you cheerfully obey, no matter how it feels, you are acknowledging the authority of God and you give Him glory, the very thing He has created you to do.

True power comes from recognizing God’s authority in your life, and not by asserting your own.  The astounding thing is that the Almighty God with the ultimate positional authority of Heaven came to serve in humility on earth.  Even more astounding: He shares His authority with you, for you are to reign with Him.

By identifying ourselves with His authority, we gain authority to speak the truth, to live the truth, and to be called the sons of God.

What is all of this, our response to God’s authority?  Is it not worship?  What is to be your response to a God who has the ultimate positional and personal authority and comes to give Himself to you?

Worship, in the iridescent spectrum of forms which worship may take in our lives!

Prayer:  We praise thee, O God; we acknowledge thee to be the Lord.

All the earth doth worship thee, the Father everlasting.

To thee all Angels cry aloud; the Heavens, and all the Powers therein;

To thee Cherubim and Seraphim continually do cry,

Heaven and earth are full of the Majesty of thy glory.

The glorious company of the Apostles praise thee.

The goodly fellowship of the Prophets praise thee.

The holy Church throughout all the world: doth acknowledge thee;

The Father: of an infinite Majesty;

Thine adorable, true and only Son;

Also the Holy Ghost, the Comforter.

Thou art the King of Glory, O Christ.

Thou art the everlasting Son, of the Father.

When thou tookest upon thee to deliver man: thou didst humble thyself to be born of a Virgin.

When thou hadst overcome the sharpness of death, thou didst open the Kingdom of Heaven to all believers.

Thou sittest at the right hand of God, in the glory of the Father.

We believe that thou shalt come to be our Judge.

We therefore pray thee, help thy servants: whom thou hast redeemed with thy precious blood.

Make them to be numbered with thy Saints, in glory everlasting.

O Lord, save thy people: and bless thine heritage.

Govern them, and lift them up for ever.

Day by day, we magnify thee;

And we worship thy Name, ever world without end.

Vouchsafe, O Lord, to keep us this day without sin.

O Lord, let thy mercy lighten upon us, as our trust is in thee.

O Lord, in thee have I trusted; let me never be confounded.

Resolution:  I resolve to submit to the Lord in the one area in which He has specifically asked me to submit today.

The Throne in Heaven, David Miles – Permission granted by the artist 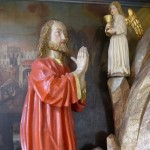 September 23, 2016
Some Ways to Pray the Lord's Prayer
Next Post 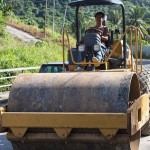 September 26, 2016 Matthew 8:14-27 - I am a Christ-ian
Recent Comments
0 | Leave a Comment
Browse Our Archives
get the latest from
Give Us This Day
Sign up for our newsletter
POPULAR AT PATHEOS Evangelical
1

Evangelical
Shopping for God - Designer Liturgies in the...
Give Us This Day 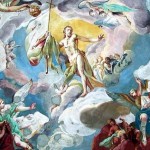 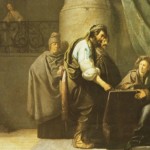 Evangelical
Luke 19:11-28 - The King and His Treasure
Give Us This Day 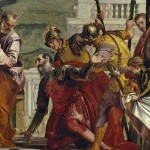 Evangelical
Luke 7:1-10 - Finding Yourself in Jesus' Story
Give Us This Day
TRENDING AT PATHEOS Evangelical