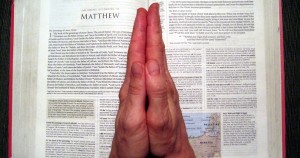 So many wonderful choices today!  Do I want to be a ruler whose daughter is raised from the dead, a woman whose twelve-year flow of blood is healed, a blind man who sight is restored, or a mute and demon-possessed man who is healed?

How ‘bout I get to be all of them!

In a way, I do, because the point of each of these healings is more about Jesus Christ and who He is revealed to be than it is about me.  The miracles of Jesus, in fact all parts of the Bible, are first and foremost about Jesus Christ.  And today the Scriptures teach me about a God made man who has power over disease, demons, and even life itself!  Only after I understand Jesus can I understand where I am in today’s lesson.

I feel as if my bold adventure in writing Give Us This Day has been a life lesson in how to interpret the Scriptures.  Now I have to begin to look and listen to God’s Word in new ways to keep hearing what He wants me to hear.  I also have to find the balance between trying to stretch the New Testament out on a procrustean bed so that every passage fits exactly into my life, down to every literal detail, and the other extreme of simply poo-pooing what Scripture says.

So here we go again.  On the one hand, I want desperately to have faith and be healed from every infirmity I have.  The Scriptures seem to suggest that if only I had faith, I would be healed from whatever troubles me: “According to your faith, let it be to you” (verse 29).  On the other hand, I know that I and other faithful Christians aren’t always healed.  I remember that even St. Paul was not granted that the thorn in his flesh would be removed.  Even the Son of God was denied His fervent, sweat-as-blood soaked prayer in the Garden.

And so there must be another way: a holding of the two hands together in prayer.  I choose both to have faith and to accept that I won’t always be healed.  The truth is that sometimes I will be healed from my troubles, and other times I won’t.  Do I have true faith only in the times I’m healed?  No!  I will have faith both when God heals me and when He doesn’t, so that in all things I put my trust in Him.  Ironically, it is often in not being healed that our faith is demonstrated.

Maybe we should step back a moment and examine the nature of faith.  Is faith only faith when the desire of the faithful one has been granted?  In that case, was the faith of Abraham null and void because he didn’t receive all his promises immediately?  Was Paul’s or Jesus’ faith really faithlessness, since their prayers “weren’t answered.”

You can see that this gets us nowhere fast.  Isn’t faith a trust in God and His goodness, regardless of how things turn out?  If so, let me show you how an unanswered prayer might demonstrate a remarkably strong faith.

First, let’s assume that the poor slob whose prayer “isn’t answered” is, in fact, praying for what he needs.  Let’s assume further that when he asks, he truly believes that God can deliver him and will, if it pleases Him.  Already, we can see faith in work in such a man.

Now here comes the tricky part.  What if God doesn’t deliver that man?  What are our options?  We could posit that the man had no faith, but as we’ve already seen that isn’t always the case.  Here’s another point: after how much time has passed can we say that God hasn’t heard and answered the prayer?  Some prayers, such as healing, may be open-ended for quite a long time.  Furthermore, is it necessary that every prayer be answered affirmatively?  If that were the case, then we’d have to infallibly know what was good for us, so that God would always give us what we asked for.

The only other option is that we must sometimes ask for things that aren’t in our best interest.  Yes, it would be good for God to heal each and every one of us from every problem we’ve ever had.  But God doesn’t, so He must have something better in mind.  This is the way faith thinks, because its basic instinct is to trust in God and His goodness over and against what the flesh and the world might naturally affirm as good.

This is faith in action: to trust in God, even when, especially when, sight doesn’t affirm God or His goodness.

Let’s return to our unhealed man.  What might happen if he were healed quickly and easily every time?  Given our fallen nature, it would be easy for us to go on our merry way, forgetting God and thinking that we were owed this healing.  But what about the unhealed man?  If he keeps his faith in God, in spite of not being healed, what great faith that man has!

Faith, once again, trusts in God and His goodness; therefore, faith waits humbly and patiently for the Lord, and it accepts whatever the Lord grants.  Faith believes that as long as it trusts in God, whatever the answer is will be something God gives him out of love and goodness.

In this way, whether the prayer is “answered” or not, the prayer of faith is always answered, because God will honor the one who is faithful to Him: “He has filled the hungry with good things.”  What the prayer of faith ultimately wants is what the Father wants.  And that’s the whole point of prayer and faith: that we may be united to the will of the Father, regardless of what that will is.

This isn’t always the case, mind you, but the saint who has faith in trouble and is not healed may be the saint with the greatest faith of all.  He may be one, like Paul and Jesus, whom God loves in a special way.  God must believe that ones with faith such as these have a faith so strong that they can withstand a loving “No” from the Father.  They are the ones who are driven moment by moment and day by day to the One who can sustain them in their spirit, even if their flesh is decaying.  These are the ones who are called to share in their Master’s sufferings, as He first suffered for them.

Such a saint may also be the saint who has more than his fair share of prayers “answered” as well!  This is because he is one who is learning to trust the Father in all things, and so he finds favor with his Lord.

And so I vow to be faithful to God, to have and to hold Him from this day forward, for better for worse, for richer or for poorer, in sickness and in health, to love and to cherish, for death will not part us.

Prayer:  Lord Jesus Christ, Son of God, have mercy on me, a sinner!

Resolution:  I resolve to ask God for faith during difficult times when He seems to be slow in answering. 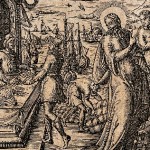 REVELATION: 5 Books Every Pastor Should...
Crux Sola: Formed by Scripture to Live like Christ
Related posts from Give Us This Day 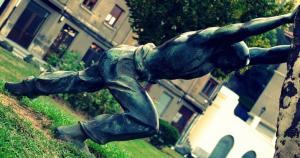