In this passage, John 12:34-43, we have one of the most striking contrasts between the presence and grace of God and the resistance of men to God.

Then God said, “Let there be light, and there was light.  And God saw that the light was good; and God divided the light from the darkness.”

“I am the Light of the World,” He is telling them.  “Hear Me, see Me, while I am here that you may walk in the Light and see where you are going.  Believe in the Light, that you may become sons of light and escape from the darkness.”

What is the response of the people to the voice of God and the Light of God in their lives?  In what might seem like an unobtrusive and irrelevant detail, we find an interesting comment by John at the end of verse 36: “These things Jesus spoke, and departed, and was hidden from them.”

Do you see it?  Do you see what just happened?  Doesn’t it make your hair stand on end?

Here’s Jesus talking about walking while we still have the light.  And then what does He do?  The Light of the world walks away from them.  He “departed, and was hidden from them.”

Coincidence?  I don’t think so.  What do we read in the next verse?  “But although He had done so many signs before them, they did not believe Him.”  I think this is the same point John is trying to make in verse 36.

Seeing this division of the dark from the light, because the dark decides to walk away from the light, makes me wake up, as much as the bright morning sun on my face coming through the window (actually, more than this!)  I don’t want to be one of those who walks away from the Light.  Personally, I don’t think I’m in danger of doing this in a permanent way.  But then again, who does?  If we really thought this were a possibility, wouldn’t we be a little more on guard?  Wouldn’t we carry around with us our spiritual photometers and be checking them more frequently than we check our Blackberrys, cell phones, or e-mail?

I believe in Jesus.  There, that should be enough.  Go ahead, say it, and you’ll feel better too.

Here we have those who believe in Jesus but will not publicly confess Him.  I don’t want to appoint myself judge of their souls, but I do know one thing: I don’t want to be one of these guys.  The word “confession” can mean several things, but in the context of the early church and ancient world (which was much less individual and private and interior) I know that a very likely meaning is the public confession of Jesus Christ before men.

“Whoever confesses that Jesus is the Son of God, God abides in him, and he in God” (1 John 4:15).  Isn’t this part of what it means to walk in the light: to publicly confess Him?

Simon the sorcerer also believed in Jesus Christ (Acts 8:13).  But was this belief by itself enough?  This same Simon tried to buy the power of the Holy Spirit, and Peter said that his heart was not right in the sight of God, that he was poisoned and bound by iniquity, (Acts 8:21-23) and said, “Your money perish with you” (verse 20).

It is no small sin, therefore, to say you believe, but then refuse to confess Jesus Christ before men.  What could possibly keep those who had begun to walk in the light to turn from it?  John 12:43: “for they loved the praise of men more than the praise of God.”

And so I now turn the Light on me.  Have I been ashamed to confess Christ before men?  I think it means more than simply saying, “I’m a Christian.”  Have I been willing to base my public decisions, my business decisions, my personal life, and my political choices on Jesus Christ?  The reason the world seems devoid of God and desacralized (or secularized) is not that God Himself is gone but that we live in darkness.  And why is our culture in darkness?  Because Christians have refused to let their lights so shine before men that they might glorify their Father in heaven.

If we truly are the Body of Christ and His presence on earth, what happens when we say that we prefer to keep our faith private?  “I don’t want to be obnoxious or make anyone feel uncomfortable.  I don’t want to rock the boat,” we say.  What happens when we keep our faith private is that we have hidden our light under a bushel.  What happens is that the Light of the World walks away from those who most need it, and they are cast out into greater darkness.

It’s not just about our public confession, however.  In our families, do we confess Jesus Christ frequently and joyfully?  In my studies of Christian families, I’ve found that families who frequently talk about God, pray together, go to church together, and have devotions together are much more likely to have kids who remain Christians and grow strong in the light.  Families where Christ is not frequently confessed in daily life are much more likely to have children who have a weak faith or one that is eventually extinguished.

“For you were once darkness, but now you are light in the Lord.  Walk as children of light” (Ephesians 5:8).

“You are the light of the world.  Let your light so shine before men, that they may see your good works and glorify your Father in heaven” (Matthew 5:14, 16).

pure brightness of the everliving Father in heaven,

Now as we come to the setting of the sun,

and our eyes behold the vesper light,

You are worthy at all times to be praised by happy voices,

and to be glorified through all the worlds.  Amen.

Resolution:  I resolve to find one way I may publicly (including in my family) confess Jesus Christ today.

March 17, 2016 Friday in Lent 5 - John 12:44-50
Recent Comments
1 Comment | Leave a Comment
Browse Our Archives
get the latest from
Give Us This Day
Sign up for our newsletter
POPULAR AT PATHEOS Evangelical
1

A Parable/Greek Tragedy
Roger E. Olson
Related posts from Give Us This Day 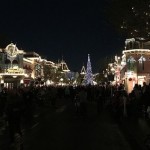 Evangelical
John 1:1-18 - The Light of the World
Give Us This Day

Evangelical
Saturday of Trinity 14 - Matthew 6:19-34
Give Us This Day
TRENDING AT PATHEOS Evangelical