Life and death hang in the balance in this passage.

It seems odd, even bizarre to the point of belonging in a Ripley’s Believe it or Not Odditorium somewhere, that life and death would arise in such a way.

In the beginning of John 5, Jesus heals a man who had had an infirmity for 38 years.  We’re not told what the infirmity was, but in any case this man’s infirmity is a sign and symbol of our infirmity.  We, too, are born lying on our mats, unable to lift ourselves to the source of all healing.

Jesus comes to this man, commands him to “Rise, take up your bed and walk,” and the man obeys.  Immediately, He is healed, takes up his bed, and walks.

And this is a picture of how God comes to us through His Son and offers us healing.

What’s even more amazing, perhaps, than the fact that Jesus can heal is the response of the Jews to this act of healing.  They persecute Jesus, “sought to kill Him.”  Now why would they seek to kill Jesus, who had healed.  Because He had done it on the Sabbath.

Now I’m all for law and order, and I’m faithful to the laws and principles that have been given to me in life.  But this seems unreasonable, even incomprehensible.  Yes, keeping the Sabbath is a God-made Law that the Jews were required to obey.  But, as Jesus teaches, elsewhere, surely the Sabbath is made for man and not man for the Sabbath.  Surely, the reason the Sabbath was given was out of love and for love, and it was out of love that Jesus healed.

More than this, the commandment to not take up your bed on the Sabbath was a man-made addition or interpretation of the true Law.  It was not something God had specifically ordained.  More importantly, it acted to limit love, not to protect or foster it.

In today’s passage, Jesus gives the Jews another reason to want to kill Him, this time a more substantial one.  This time the Jews seek to kill Jesus because He said that God was His Father and thereby made Himself equal with God.  Here’s a clear case of the claims that Jesus made.  There are only 2 possibilities.

First, He could have been lying or deceived.  In either case, He wasn’t equal with God.  If this were true, then under the blasphemy laws, Jesus probably did deserve to die.

The other possibility is that Jesus was telling the truth.  In that case, the only reasonable response would be to turn to Him as God for healing, salvation, and life.

And so it is strange that from an action that brought new life to one who was symbolically dead, the Jews sought to kill the Giver of Life.

As the Father gives life, so the Son gives life.  In saying this, Jesus not only makes Himself equal with God but also speaks of His life-giving powers.

Jesus speaks about this more than once in the following verses, but the most startling thing He says may be that “the hour is coming, and now is, when the dead will hear the voice of the Son of God; and those who hear will live” (verse 25).

Now it may be that Jesus is talking about the resurrection here.  He certainly is in verses 28 and 29.

But in between the healing of the infirm man and the resurrection, Jesus gives life to all who will hear Him.  And that’s where you come in.

Jesus promises life now to all those who are willing to hear Him.  Some need to be given life for the first time.  You, if you are reading Give Us This Day, have probably heard the life-giving voice of Jesus before.  But I know that, like me, you need to hear it again.

At this moment in my life, I’m feeling pretty much dead.  My circumstances will have changed by the time most of you are reading this.  I may have dodged the proverbial bullet by then.  But by then I’ll need to hear the life-giving voice of Jesus again for a different reason.

Jesus calls you to Himself every day.  He is your Daily Bread, and only by hearing Him and coming to Him can you be sustained in this life.  I know that you’ve tried it your way before.  You’ve tried surviving without the Giver of Life.  It’s pretty tough going.  Given enough time, it’s death.

You may feel so dead today that you feel as if you can’t even drag yourself to the throne room to be heard.  That’s OK.  But make sure that you listen today for the voice of the One Who Gives Life.  If you hear His voice today, come to Him, obey Him.  And He will give you life once more.

Prayer:  Lord, I come to You today, asking that You refresh me with the Living Water that is Your Son.  Lift up my drooping hands, strengthen my weak knees, and make straight paths for our feet, so that what is lame will not be put out of joint.  Today, may I find life in You, longing fervently and searching diligently while You may be found.  Amen.

2.  Stop everything and meditate on Jesus Christ as God in your life today, prayerfully exploring the implications of this fact.

Resolution:  I resolve to spend some time today turning to the Lord and asking Him for new life. 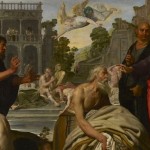 Evangelical
John 5:1-15 - Miracles and Million Dollar Question
Give Us This Day