Hell For Other People

Groucho Marx dreamed he had died and gone to Heaven instead of Hell. Once there God called him to the dinner table. From the divine dinner table, Groucho could look into Hell and saw all the people having a feast. He was appalled when God served him a leaf of lettuce and crackers.

“Why are we only eating this when people in Hell are having a feast?”

God replied, “Do you know how hard it is to cook for only two people?”

Very, very, very few people who believe in Hell think they will be there. I find that fascinating. Why is Hell for other people?

An Offer to Debate Hell

An evangelical friend wants to, as he put it, get drunk and debate doctrine with me. “There is a Hell,” he maintains. I replied, “Considering I am a recovering alcoholic, he would lose both those contests.” The irony was lost on him. Getting drunk is a damnable sin according to evangelicals.

People with such attitudes hold Hell is for other people. I never have understood this thinking. And yet, it persists. If someone claiming to love me believes I am facing eternal conscious torment, that person should not be relishing in the idea. Such a person should be questioning why such a cruel fate would face limited beings at all. But they would only question it if they were motivated by love. And that is the problem.

The World Is Not Paradise

Our world is no paradise. It isn’t Eden. Abba Poemen, of the desert monks, warns humans cannot make a paradise on earth. We are limited beings. Humanity will only do so much. And there are consequences to every action. Industrialization is the best example of the destructiveness of our passion to have paradise on Earth. People in some lands enjoy plenty. Other places have starvation. And we accept it as necessary.

The failure to love comes when the privileged fear losing what they have. It does not matter how much or how little they have. The fear of losing any of it motivates the worst attributes of the privileged. Adding eternal conscious torment after a life of misery is the cruelest understanding of Hell. Perfect love is supposed to overcome fear.

Jesus talks about Hell. The most famous example is the parable of the Rich Man and Lazarus (Luke 16:19-31). Lazarus is a leper (which is what the name means) who suffers throughout his life. The Rich Man is vaguely aware that Lazarus suffers outside his gates. He consumes a feast every night. Lazarus would take the scraps thrown away to the dogs. But he can’t get that either. The dogs are aware of his presence and are not friendly to him.

The two men die and go to the realm of the dead. One side is torment where the Rich Man stays. The other side is described as “Abraham’s bosom.” Lazarus resides there among the righteous. The Rich Man requests Lazarus provide him some relief. Abraham explains to the Rich Man that Lazarus will not be visiting him. Lazarus suffered. The Rich Man thrived. The Rich Man never showed any desire to relieve Lazarus’ suffering. Now it is the other way around.

There is nothing said about Lazarus being righteous for his own part. It appears that he has suffered enough. The Rich Man asks that Lazarus be sent to warn his brothers. Why would they pay attention to Lazarus if he never did? It is this failure to pay attention to the starving leper that causes the Rich Man to suffer his torment.

Someone may object to what I say about Heaven being viewed as a reward. In practice people influenced by evangelicalism think by believing in Jesus’ suffering, death, and resurrection, they will avoid the torment. If a child returns from Vacation Bible School reporting they said a prayer so they would not go to Hell, they got the point. Children who believe not cleaning their room makes them candidates for eternal torment understand what they are taught. So, American evangelicals believe Heaven is a reward for believing. I understand why people listening to us get confused. Evangelicals claim no one earns salvation. Progressive Christians say the same thing. But we don’t mean the same thing. One is fear based. The other is a response to love that is unfathomable.

Love does not deal in reward and punishment as goals in themselves. We feast to know the goodness we are given. We fast to understand the suffering of those who do not get the choice. Our sins are recalled only so we can remember the goodness of the gifts we receive and share. 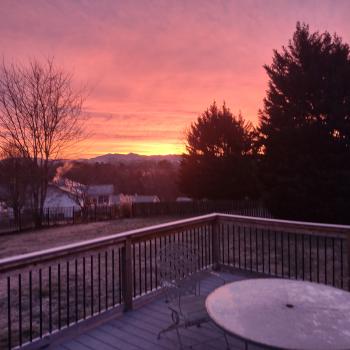