Preacher Stories And Other Lies

We call them illustrations. Other people might say, “Preacher stories.” Many times they are outright lies. I wonder if this is the reason white evangelicals went along with Trump’s lies. Pulpit stories are meant to engage the audience. We prefer a good story to direct instruction. But too often the stories pastors and teachers tell cross the line into dishonesty and deception. When that happens, honest and discerning people simply walk away and do not look back. I try to be very careful. But that is not the case for many.

The worst lies preachers tell are always self-centered and self-aggrandizing. Recently, a preacher attacked our “denominational leadership” with an untruth. The claim made was obviously false. But it is also part of a pattern many would recognize. It involves elements of the “straw man argument” as well as being one’s own hero. The outline of the story is three-part.

Such stories pander to an audience that gives the preacher applause for being the hero. People in fundamentalist and evangelical churches are manipulated by these stories into believing authorities are out to get them. The hero has stood up for them. An adult person should be ashamed to do such things. But, when conscience is denied for so long, it may never matter again.

There are two types of personal inadequacies.

Instead of dealing with these fears and failures, we tend to cover over them. We may place ourselves on a pedestal. This is the narcissistic approach, We may attempt to lose ourselves in some cause. Another way is to give one’s self totally to another person. These are the three basic ways people hide their personal fears. Religion enables any of these three approaches to be used.

Selfish stories become destructive when a villain is cast as the ultimate evil. Such evil cannot be negotiated with, it must be destroyed. When a colleague used a selfish story described above, he admitted to being someone who is willing to destroy the church. A problem arises. How does one keep the destructiveness to a minimum? The story of the patriarch Jacob may give us a clue.

The Character of Jacob

The Jacob cycle of Genesis 27-35 presents a character with severe flaws. Jacob means “deceiver” or “usurper.” He lives up to this name in his early life. Jacob steals the birthright and then the blessing from his older brother. He tricks his father Isaac. He attempts to manipulate the flocks of his Laban by magical means. Jacob creates a pattern of tricks and deceptions around himself. If anything can be said about him, he is an anti-hero.

Jacob does not recognize his role in his troubles until he wrestles with God at the Jabbok. God asks his name? He admits that his life has been destructive. His name is deceiver. Jacob spent his life covering his feelings of inadequacy. His parents played favorites among their children. He was the younger brother who was going to receive less of the inheritance. Laban deceived him by getting him too drunk to realize Leah was switched for Rachel. All these actions were taken against him. What he never seemed to realize is, that he did not need to respond the ways he did to them.

This point is made apparent in the first appearance of the Divine who promises Jacob will be protected. Most people do not have this promise made to them. But the resolution of the story remains. We do not need to feel as we do. Our personal inadequacy should not cause us to lie, deceive, or destroy.

Pulpit illustrations should be enlightening. They should not pander to the prejudices of the audience. They should not make the preacher the hero. Better knowledge of biblical narratives and interpretation tools are necessary to develop homilies that avoid such pitfalls. The stories we tell are not tales of self-aggrandizement. They are narratives that give the people of God our identity.

What we tell is content. How we tell it is context. The vision we have of what divine love means tells us whether we are loving. If God regards us as vile, as some teach, then we will invent excuses to hate others. If God only forgives some people, then we will find reasons to only forgive some. But we are to love all people. We are to forgive and pray for everyone. These are basics. How can our vision of the divine be any less than that?

Our stories should not deny the existence of evil. They should give us the light to overcome evil. The stories should help us know love is the greatest approach to our problems. 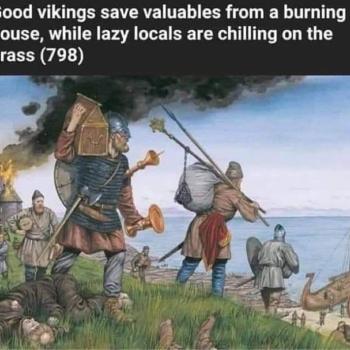 May 24 Flashback: Comes in colors
Being fallible, finite, and merely tri-chromate is not a sin.
view all Progressive Christian blogs
Copyright 2008-2021, Patheos. All rights reserved.