A friend confessed she was having a faith crisis because of Christian nationalism. She needs a way of reconstructing her faith. Reconstruction of one’s faith will come after deconstruction. People like my friend need guidance on where to begin after the process of deconstruction has taken place. It is easy for people like my friend and me to simply say, “we are not like them.” We have been doing this for a long time. But it has not helped us very much. We feel more isolated. My friend does not attend a “conservative” church. People like her are not necessarily avoiding Christian nationalist/fundamentalist teaching and preaching in their home congregations. They are avoiding the God they know they share with the Christian nationalist. What do we do about that? Deconstruct. What do we do after that? I give 3 suggestions

Christian nationalism proposes a god with characteristics similar to those of other Christians. The Christian nationalist God is all-powerful, all-seeing, all-knowing, and too holy to approach. Many of us heard about this God in every church we have attended. We added God was all of these things plus all-loving, compassionate, and merciful. So, we were told about a great Patriarch who can do all things and empowers believers to do all things. God hates sin but loves the sinner. And we are the sinners. We know churches emphasize some of these attributes more than others. The sins that are most hated by God depends on how which attributes we emphasize.

This Process of Reconstructing

Reconstructing our image of God is not easy. This is because we think we must make an idea of God. Mortimer Adler claimed years after publishing his cosmological proof, How to Think About God, he realized he had proven the existence of a god that was “not worth praying to.” In short, there was no love in this god. He describes a religious experience in a memoir, A Second Look in the Rearview Mirror, of how he felt a loving divine presence during a prayer an Episcopal priest held with him in the hospital. He became a Christian shortly after that.

Reconstructing our image of God is pursuing divine love and lovingkindness. Church members ask if I believe God was fully embodied by Jesus. Of course, I do. Jesus embodies the love of God. Jesus points to the divine love as well. The moral order of the universe is based on this love. Life expresses divine love in many ways.

This is a more purposeful act than it sounds. It is not enough to read the scriptures to ourselves or families at home. The Bible is to be read in community. But we need to read with unfamiliar communities. The Sunday following the 2016 election, my spouse did not go to her church. She attended one of the historic black churches in our town. The message was simple. “We have been here before. We will overcome it again. Make no mistake it will be hard work.”

My guess is that was not the message of most mainline white congregations. I did not say much about the election. I am sure many white congregations had pastors treading on egg shells with messages like, “we pray for our new president and for God’s guidance.”  Personally, I was in shock and did not know what to do. Reading the scripture with white churches was not going to help.

I recommend reading theologians of color. James Cone, Martin Luther King, Leonardo Boff and others whose witness is borne from experiences that challenge the self-righteousness of the people in charge with divine justice. Taking part in studies with brothers and sisters from non-white and non-prosperity gospel faith traditions. We can never live their experience. But we can rebuild our faith from their conclusions. Read white Christian authors who learned this.

Addicts have problems. The problems may be familial, social, financial, and legal. But almost every addict refuses to consider the possibility the root of their problems is addiction. They may be quick to point out the legitimate faults of other people. They will likely know someone who uses more or drinks more than they do. And they will say the addiction is the only thing they control in their lives. Recovering from addiction is admitting something about oneself that no one wishes to admit. Addicts have to give up the illusion of controlling the substance.

Barbara Ehrenreich in her book, Nickel and Dimes On (Not) Getting By in America, writes about who she would have become “if her father hadn’t managed to climb out of the mines.”(p.169) Her life was made possible by the ability of her father, a white miner, to use social mobility. The use of the term “climbed out” reflects the false sense of achieving it entirely on his own. I do not mean any disrespect to her or him. But white male privilege made it easier for him to do these things including get his daughter her education. Addiction to privilege is not facing up to the fact that people still judge the content of people’s character on the color of their skin.

The Process of Recovery

First their is admitting the truth. Nothing else works unless that is done. I am blessed to have been born in most beautiful part of the wealthiest country in the world. I have a strong Southern Appalachian heritage. These are not things I achieved. But they are aspects of my life I am able to put to good use because of the color of my skin. It is difficult to admit that all of my efforts had this kind of help. Knowing this though; what do I do about it?

Fight against it. Make my children aware of it. And fight the assumptions of white privilege within myself. If white Christians want to live authentically Christian lives, we have to give that up every day. St. Paul struggled with a privileged existence all of his life. He was a Roman citizen and a man whose family was able to send him for his education in Jerusalem. He planned to make use of these advantages in preaching Christ. But he struggled with the sin of coveting according to Romans 7:7-8. His faith needed reconstructing. It only occurred when he gave up on the privilege, lived as prisoner, and relied solely on grace to see him through.

We may not be Christian nationalists. But they show us where our assumptions combined with privilege leads the white churches. I hope these steps and suggestions on how to go about them help others as they have helped me.

About
C. Don Jones is pastor of Sycamore Tree United Methodist Church in Maryville, TN. You can read more about the author here.
Previous Post

July 18, 2022
Is Your Political Organization A Church?
Next Post 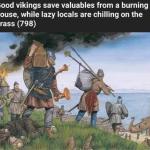 July 25, 2022 Burning Down Our House
Browse Our Archives
Related posts from Glorious Life