“It is neither right nor safe to go against conscience” -Martin Luther.

Does your conscience ever bother you? Of course, it does. If it does not then, you are not human. I do not know if anything like conscience is observed among the other primates. But I would not be surprised if it is. It appears that it is needed for the sake of community. And so recognizing the freedom of another person to have concerns about their actions is important for both the health of individual and the community.

The Conscience of Another

I went to dinner with a stranger. He was in town to help us install a new system. I overheard him ask if there was any meat in what he ordered. I asked, “Are you a vegetarian?” He said he was. “Does it offend you to eat with someone eating meat?” He said it did not. And that was the end of the discussion. I know what I would have done if a dinner partner eating meat bothered him. I would not have eaten meat at that meal no matter how much I wanted it.

Hopefully, I acted in accord with St. Paul’s instructions from Romans 14. I did not look down on him for eating only vegetables (or being Hindu for that matter). Our discussion was not about religious principles or scruples. I asked him to go to lunch with me in order to make the transition to the new system more friendly.

Other times the conscience of the other person becomes an issue.

The Church And Liberty

Being a pastor in rural areas influenced by fundamentalism presents many challenges. Church people are a suspicious group. When female clergy have been assigned to a church I am leaving, I often get asked about certain passages from St. Paul. Mainly, this happens when a congregation has never had a female pastor. After some time, if people decide to welcome that person, they begin to see the issue differently. I try to make these transitions happen.

Hamlet appealed to the guilty conscience of his uncle and his mother. We have tended to view conscience only in those terms. Feelings of guilt can be manipulated. But conscience is about responding to situations. Some church people argue that their own scruples should determine the limits of the behavior or other people. They argue Paul is saying we can harm the conscience of another person by not abiding by that person’s scruples. But that is not what Paul argues. He argues that neither person should condemn the other one.

But what should be done about the people who condemn others? Paul’s choice of words is involved here. “We who are strong must put up with the failings of the weak…” (Romans 15:1) I wonder if the people with the most scruples think of themselves as weak or strong? He seems to indicate it is so. But readers often look at other people as being weaker, less than, or worse. “After all Paul says ‘we’ and that means me as well,” They say. I tend to see people claiming to be “traditionalist, conservative, and orthodox” as being weaker. Those others think I am deceived.

I often walk away from people who are more interested in making a point than coming to a conclusion. Since I have been known to do that myself, I find the arrogance especially annoying. We are in a time where making (or rather scoring) points is more important than understanding. The fundamentalists are succeeding in destroying the consciences of other Christians by enshrining their scruples into secular law. How? By violating the teachings of Jesus himself.

Enslaving people to one’s own conscience is the destruction of it. The only loving response is in acting to free others from such bondage. Luther is correct. We can not ignore conscience. Too many of us have “kept the peace” for too long. But it is not the peace Christ calls us to practice. Loving and freeing the other person begins that peace.

July 7, 2022 Are Your Children Hearing Of A Hateful God?
Browse Our Archives
Related posts from Glorious Life

Progressive Christian
God Does NOT Have A Plan For Your...
Glorious Life 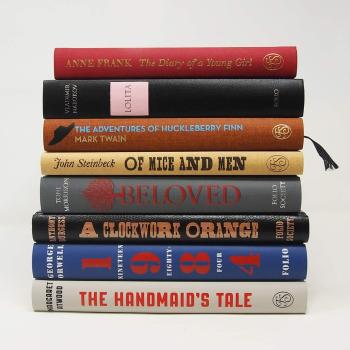 10/3 Flashback: It's always the ones you most...
Good faith and political power are inversely proportionate in the anti-abortion movement.
view all Progressive Christian blogs
Copyright 2008-2021, Patheos. All rights reserved.
Close Ad