The Members Only jackets of my teenaged years illustrate how I view those times. I, of course, wore an imitation. No label described me as a member of the elite circle. It was the same with my Sears knock off of Izod shirts. I was disgusted with the dragons that stood in place of the alligators. I tore them off. The traces of glue could still be seen on the shirts. People asked, “Why I tore off the alligators.” A friend said it would be cool if I glued them back on upside down and make the tongues hang out like it was dead.  I marked myself rebellious. Who needed to be a member? I hid the fact that I was working class among my peers.

Every time I go to see my doctor I am asked to prove I am a member of something. I am asked to produce my driver’s license and my insurance card. Once these are verified, I am asked for another card for payment. For the convenience of visiting my doctor, I must demonstrate three forms of membership. One proves my legal name as identified by the state. Another proves I am part of some group health insurance policy. And a third proves I am a member of the credit union.  These are not all necessary. Some forms of legal identification and the ability to pay are required for non-emergency health care.

The 3 memberships allow me to live and participate in society. They tell institutions I am a member of society. I am a member of a members only community. St. Paul, according to Luke, asserted similar membership each time he declared his Roman citizenship. Members of that level were granted rights and privileges no one else had. Paul possessed these rights and privileges. He could proclaim a crucified Christ. But he could never be crucified himself.

Progressives, evangelicals, Catholics, and orthodox are all guilty of logical fallacy. Whenever someone points out to us that Christians are responsible for violence, mass murder, and authoritarianism, our first response is often, “They are not real disciples.” When Christians accuse each other we are often tempted to say, “You are not true followers of Jesus.” This argument is the ad hoc fallacy. It is also called “the appeal to purity” or “the no true Scotsman” fallacy.

Church membership is easier to define. Who participated in the proper rites or actions? The people who did are members. Whether people lived up to their vows or promises, is a different matter. There may be grounds for expulsion from membership. But usually, that path is not taken.

Members Only of What?

Let’s look at the word member as used by Paul in 1 Corinthians. A member is part of or a partaker in something. We often say the Christian is a member of “the body of Christ” meaning the Church. This church is not the one we go to. This one transcends our local congregation.

St. Paul claims we followers of Jesus are members of Christ. “For just as the body is one and has many members, and all the members of the body, though many, are one body, so it is with Christ.” (12:12) Later he says, “Now you are the body of Christ and individually members of it.” (12:27) Paul claims the opposite of our modern claim. The local congregation is, in fact, the Church that also transcends it. “For in the one Spirit we are all baptized into the one body – Jews or Greeks, slaves or free – and we are all made to drink of the one Spirit.” (12:13)

Paul’s ecclesiology is why I am for inclusion in the churches. No one should deny the baptism of another person. And yet, many church leaders seem to enjoy doing that.  Denying someone’s baptism is excused by claiming the person was not the proper age, heard the proper words from the proper person, or used the correct amount of water. Luke shows Ananias claiming Saul as a “brother” even before his baptism. (Acts 9:17) Why, then, do people take it upon themselves to exclude others? Tradition? Tradition is susceptible to human fragility as anything else. People keep traditions they prefer and discard the ones they do not.

The gospels confuse us sometimes. “Whoever is not against us is for us.” (Mark 9:40) “Whoever is not with me is against me.” (Matthew 12:30) Which is it? Matthew reverses the claim in Mark in a different context. When telling the story from Mark, Matthew makes it clear the exorcist is casting out demons in the name of Jesus. Luke includes both discussions from Mark and Matthew. The confusion allows many people to start deciding who the enemies of Christ are. If I am a Christian, the enemies of Christ are my enemies. At least, that is the assumption. But it turns around and becomes my enemies are the enemies of Christ very quickly. Jesus in Mark stops that assumption among the disciples.

Who is a true Christian? That is not my decision beyond myself. Who can I work with? Almost anyone who does not require me to violate my conscience. It is as simple as that.

Progressive Christian
What Do You Mean By Classical Christian?
Glorious Life

Progressive Christian
Choosing To Close Rather Than Die
Glorious Life 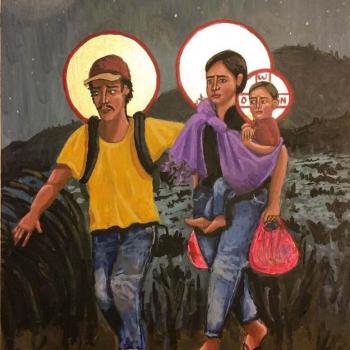