What’s On The Menu?

Food is a spiritual issue. Mark Mylod’s The Menu makes that abundantly clear. It is a quirky thriller that puts gluttony, one of the seven deadly sins, on display. You can watch the trailer here and catch the movie on HBO and HBOmax streaming service. The plot is a world class celebrity chef whose identity is completely intertwined with his cooking. The patrons are people who are not hungry for food but hungry for new and exotic experiences. The chef is, pardon the pun, fed up with them.

A Menu for Gluttony

The film is fun and will leave you troubled. It is the type of movie Americans are not supposed to like. There is no easy reconciliation of the problem. However, I want to discuss the spiritual issue of food. Popular social memetics centers on food. People share to the entire world they are having chili made from their grandmother’s secret recipe. It may be the first time the sharer has tried cooking it alone. Or there is a complaint about food or service in a restaurant. The common gripes over the increasing prices for bacon or eggs or shortages of certain items are all visually vented for the world’s consumption.

Screwtape tells Wormwood the demons have done a great trick on some gluttons. They do not realize they are gluttons, he claims, because they think of gluttony to be about the amount of food eaten. He advises Wormwood to get his subject to think about his pride of being in the know about food. Steaks should be cooked with just the right sear. Wine should be of the correct vintage. One can even say whiskey properly aged in specially smoked and soaked barrels makes the real difference. Gluttony is lust and pride mixed together.

It is neither normal nor right to think of one’s self or anything attached to one’s self as special. Yet, it is common for people to believe their children or their pets are special. Wanting to believe these things is meant to reflect on the believers more than they are willing to admit. This about ego. It is one thing to love another person. It is an entirely different thing to love another person because he or she is mine.

There is a customer (Nicholas Hoult) in The Menu who desires the chef (Ralph Fiennes) to recognize his own expertise and knowledge of cooking. He is desperate for this recognition. He is not the biggest celebrity, the most richest, or the best known food critic. But he is special among all of the other patrons. The chef merely needs to acknowledge these superior attributes. Whatever happens around him is not as important as the coveted recognition of his specialness.

Gluttony can be argued as being a sin only when there is not enough to go around. But there is another form of gluttony that is encouraged by our present means of food production. Michael Pollan refers to it as “nutritionism.” It is an ideology based on the reduction of food to chemicals and nutrients. Pollan’s example is how fish, poultry, beef, and pork are often reduced to meat protein and saturated fats. This is another example of claiming people should eat the right food.

No ideology is scientifically based. It is not the nature of science. But ideologies can be based in spirituality. When we consider the arguments made over the quality of food for school lunch programs, it is evident that the arguments are ideological and sometimes personal. My son came home complaining about Michelle Obama ruining lunch by “taking away everything good.” I replied, that everything we thought was good was not necessarily healthy. I did not want to make the matter worse by claiming the school district could do better food in better ways without getting into the high weeds involved.

Gluttony is made to appear scientific when we reduce food to nutrients. We need x but discard y. Yet, communities of people are different. Some human bodies are better capable of processing sugars and fats than others. Imposing a strictly vegan diet on the Inuit, for instance, would be cruel at least until their bodies adapted over generations.

I know something about cooking. But I am no expert. Some people tell me their parents would not allow them to say they love some thing. They were told they could only love some one. My parents did not think that way, thankfully. But I can see how gluttony can be mistaken for loving food.

Truly loving food involves gratitude. This is the first step to overcoming gluttony. My family does not pray giving thanks at every meal. But we try to understand why food is a grace. Everyone should work with food at some times in their lives. Whether it be in food preparation, planting, harvesting,  or slaughter, knowing where food comes from helps one be grateful for it.

The second step in overcoming gluttony is to avoid boredom. Do not eat just to have something to do. Find something else to do. Likewise, eating mindlessly is an attempt to satisfy a spiritual craving. It will take time to find out what that is. But search out the reason. And then love food givers for providing what we need and want. Love centered around food is possible.

Enjoy The Menu if you can. 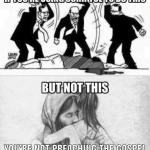 Progressive Christian
Choosing To Close Rather Than Die
Glorious Life

A Slice of Centering Prayer.
One feature of contemplative Christianity is an embracing of Mystery – the...
view all Progressive Christian blogs