You Were Never Really One of Us 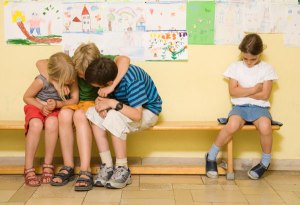 The mind is an amazing thing.  With it, we are capable of solving such complex puzzles and real-world problems!  At the same time, we are capable of shutting out large chunks of data, selecting only those streams of information which fall in line with what we expected to find in the first place.  We call this “confirmation bias” and it can totally blind you to any information which contradicts your prior beliefs.  If used in a social situation, it can silence voices which upset you so that you don’t have to listen to them anymore.  If you can find the right reason to discredit a person from the outset, you can then tune them out so that what they have to say will not adversely affect your state of mind.

“Oh, you’re an atheist now?  Well then, you were never really one of us to begin with.”

And ZAP!  Just like that, the channel is turned off.  My voice has just become irrelevant and now you no longer have to listen to anything I have to say.  Or perhaps you will listen, but now that you’ve put on your dismissive earmuffs, only those portions which say what you want to hear will make it through.

Never mind the fact that I was raised in a “bible-believing” church.  Never mind that my preacher was one of the best (and yet most humble) in the country, or that my church was (and still is) a flagship church of the denomination I grew up in, sending hundreds of missionaries all over the world for as long as I can remember.  Never mind that I “got saved” at 16 and dove headfirst into ministry, studying the Bible, witnessing, praying fervently, and teaching Sunday School for the next decade.  Never mind those preaching stints during college.  Never mind the weeks on end staying up till 3am in my dorm studying and discussing biblical theology with other fellow Christians until we were too tired to speak coherent sentences.  Never mind the years of study at a conservative seminary to obtain a Master’s degree in Biblical Studies.  Never mind the decade of involvement as a leader in my church group or that I started getting invitations to speak to other groups in other states, even traveling overseas.  Never mind the book I wrote on Christian community and the gospel (all twelve people who read it loved it!).  Never mind the countless hours of my passion and time and resources that I poured into being a Christian over a 20 year period of time.

“You were never really one of us.”

Well, that was easy, wasn’t it?  Now you don’t have to listen to a thing I say, do you?  What a clever way to disenfranchise, to exclude, to tune out, to silence the voice of someone whose opinion differs from yours!

A friend once asked me why I should be bothered at all to hear someone tell me I was never really a true Christian in the first place.  “If you’re really an atheist, why would you care?”  I’ll tell you why this irks me.  Two main reasons:

1.  It’s a worn-out logical fallacy, often called the “No True Scotsman” fallacy.  In a classic move to eliminate contrary data, this tactic says that anyone who doesn’t fit a particular narrow definition of “True Christian” (however your particular tradition defines that) can be eliminated from consideration and their opinion becomes moot.  Anyone who enjoys intellectual discussion will be bothered by this kind of thing, so cut me some slack.  Doesn’t it bother you to realize that something you were taught to say is actually a common logical fallacy?  Yes, I know there’s a Bible verse that says something like “they were never really one of us,” so maybe I’m wasting my energy here.  But would you be willing to concede that sometimes Bible verses get used in ways that are unhelpful, and that maybe this is one of those instances?

2.  Because misguided or not, those twenty years of my life were sincere and passionate and a very important part of my life.  How would you like it if someone took an eraser to two decades of your life, telling you they were illegitimate?  Through those years, I came to know both the Bible and the Christian message very well, and that earns me a place at the table of discussing religion in a public setting.  I am not approaching these matters as an outsider.  I come to this table as one who has earned the right to say something about modern American evangelicalism.  So of course it bothers me when someone pretends those years never even happened.  That discredits my contribution to the discussion.  It disenfranchises people like me so that our voice doesn’t have to be heard.  That’s not playing fair, and it limits what you can learn from people like me.  In other words, nobody benefits from this tactic, and you’ve just lost any chance you might have had of discovering something new and expanding your own ideological horizons.

I know I’m not alone in this feeling.  People like me who spent years devoted to the Christian faith don’t appreciate it when we are roundly dismissed with the wave of a hand.  It’s not a charitable way to have a discussion, and it’s disrespectful.  So knock it off, will ya?

Postscript:  I should add that the same theological assumption (“once saved, always saved” and/or “perseverance of the saints“) which leads some to say “You were never really one of us” also leads others to say, “You’re not really one of them.”

Because evangelical Christianity teaches that virtue is proprietary to (their particular) God, if I demonstrate one of the many virtues which is supposed to be present only in Christians, they will often say, “See?  You’re really still a Christian, you just don’t know it.”  I can’t tell you how many friends and family have assured me that I’m not really an atheist.  I only think I am, and it’s just a passing phase.  This assumption comes from the (rather Baptist) belief in “once saved, always saved.”  Incidentally, it’s pretty bigoted to assert that only Christians can possess virtues, even if technically you say they come from a divine source (yours, in particular).

Others will allow that atheists can possess virtues, but they’ll still give credit to (their particular) God and call that “common grace,” which simply means God helps even us rebellious people to be better than we would be without his mercy.  I suppose I’m not particularly concerned who gets credit so long as you’re willing to allow me to define myself and to refrain from telling me you know more about me than even I know about me.

June 8, 2013 Why Evangelicalism and Humanism Cannot Be Friends
Recent Comments
38 Comments | Leave a Comment
"Your story is very similar to mine. I'm about one year out from asking my ..."
Aubrey McPherson How Christianity Stunted My Relational Growth
"The same line of, hm, reasoning makes translating the Bible superfluous: "If English was good ..."
gnaddrig Seven Bad Arguments for the Resurrection ..."
"Another anecdote. My best friend is a senior counsellor, not a x-tian with a much ..."
Jennny Making Space for Non-Binary Children In ..."
"yet still these people refuse, hoping for some other form of miraculous salvation.Not seeing the ..."
gnaddrig Why the Church Keeps Getting Covid ..."
Browse Our Archives
get the latest updates from
Godless in Dixie
and the Patheos
Nonreligious
Channel
POPULAR AT PATHEOS Nonreligious
1