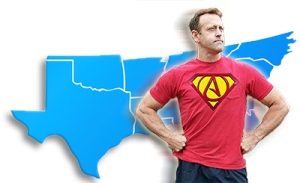 I could use your help with something.  David Silverman over at American Atheists has announced that next year’s big national convention will be held in Memphis, TN, which is Deep South territory.  But I’m discovering that getting the word out to groups of skeptics around this region is really difficult!  For one thing, “freethinkers” don’t care much for joining groups, and even after they start one, they aren’t big into networking with other groups.  Too independent, I guess.  In any given large city like Atlanta, there may be a dozen atheist/secularist groups but they don’t always communicate with each other except when members who belong to more than one group intentionally pass things along.  Then to make matters more difficult, many atheist groups in the Bible Belt are completely “secret,” which means they’re not even “searchable” on Google or in Facebook.  You would have to know somebody already in the group to get in.  This causes a problem, and not just for promoting conferences.  It causes a problem for anyone wanting to connect a friend with other like-minded people in his or her region.  So what can we do?

I would like to start intentionally connecting groups across the Deep South so that information and contacts can flow more freely between them.  I’d like to see a list of groups with contact information for both the ones which are “open” and the ones which are “hidden.”  Surely there must be someone even in the mostly-closeted groups who is “out” enough to be identified, right?  Just one?  That’s all we need.  That person can then be the gatekeeper who makes sure people don’t get in who don’t really belong there.

Do you know of any pre-existing lists or databases like this which are easy to access?  Would you please include a link below in the comments or else email them to me?  Also, if you belong to a group of freethinkers in the Bible Belt, would you please contact me or include contact info for them in the comments?  I will create a new tab on my site for people looking to connect to a group in the Deep South.  I would also like to start a Southern Atheist subreddit, as long as I can find a couple of people with enough time on their hands to help moderate such a thing as it gets bigger over time.

So what do you say?  Care to help me out?

June 6, 2014
Should Atheists Attend Church Functions to Please Family and Friends?
Next Post