Why Some of Us Don’t Come Out of the Atheist Closet September 24, 2014 Neil Carter

From time to time I hear people not from my region of the country scolding closeted atheists for remaining in the closet.  They remind us that Americans are already too judgmental towards non-believers and that the only way to counter that is for more of us to openly identify ourselves. They’re right; that is one of the most effective ways to remove the stigma which religious skepticism continues to have in our country.  Just this past weekend at Apostacon I conducted a workshop about how to “come out” to religious friends and family because I know exactly how important it is to do that.  My advice for those contemplating coming out was aimed at helping people make that transition with a minimal amount of loss in their personal lives.  But there are at least a couple of issues which are lost on people who have never lived in a highly religious region.

The first should be fairly obvious to anyone who lives where I live:  Coming out as an atheist in the Deep South can cost you your friends, your job, and even your family.  I know this because I am in touch with hundreds of other people who are “godless in Dixie” and who have experienced significant losses in each one of these areas.  Many have suffered losses in more than one of these categories, and I even know some who have experienced all three.  Never mind the legality of losing your job for being an atheist—it still happens.  Court cases can sometimes turn on a character judgment and if a judge or jury believes that being an atheist makes you a bad person, that will affect their perception of you. The same thing is true of employers. Judges and employers are still people and people have biases which affect their perceptions of others.

But there’s another kind of difficulty which people like me face after we identify ourselves as atheists:  Even those who still accept us become less comfortable being around us, and that creates an unwanted emotional distance. This consequence is perhaps more subtle than the first but it is much more prevalent. From the moment a friend, family member, or coworker learns this about me, they start editing themselves. They suddenly feel the need to avoid certain subjects or else to preface statements with “Now I know YOU don’t believe this, but I believe that…”  I wish they wouldn’t feel the need to do this. Because I live in Mississippi, the chances are good that I’ve already heard whatever they’re about to say at least five times within the same week.

I do not personally require any disclaimers or qualifications, and frankly I’d be happier if they could just not edit themselves at all.  I’d rather they just talk to me like they would anybody else with whom they are comfortable. The truth is, however, that they do not only do this for my benefit (if they do then let this be my announcement to STOP IT because I can handle a difference of opinions…I’m quite used to it, I assure you).  They also do this because it makes them uncomfortable to know that I don’t share the same assumptions about the world that they do, and this makes them feel they should preface each important statement with an acknowledgement of our differences.  But this is terribly awkward, and it creates a distance between us which would never have been there had I not told them at some point in the past that I am not a Christian.

That’s the second reason why many of us don’t openly identify ourselves as atheists.  The awkwardness and the unnecessary distance are unpleasant and they never would have been there had we not “come out” in the first place.  At times, this awkwardness can even lead some to count us out of things (e.g. conversations, get-togethers, etc) because they would feel the need to be more guarded around us regardless of whether or not we would ever verbalize any disagreement with anything they’d say in such a social setting. We wouldn’t have to—the mere knowledge that we think differently on something as important as religion is enough to scare many away.  Religious beliefs are such a sensitive subject for so many that they’d rather not have to deal with the disparity at all if they can avoid it.

Maybe such things don’t bother you.  I know many who seem oblivious to this.  But some of us are bothered by these things, particularly if they happen within some of our primary relationships (e.g. with our spouses, children, parents, siblings, or close friends).  Now, I’ll admit that there comes a time when you have to say something in order to maintain an honest relationship.  But hopefully this post will explain why some of us are very reluctant and slow to “come out” of the atheist closet. 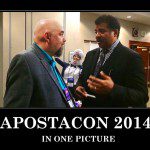 September 23, 2014
Apostacon: A Mature Conversation Disguised as a Party
Next Post 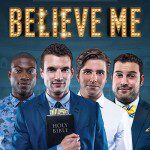 September 26, 2014 Believe Me: A Christian Movie That Doesn't Suck
Recent Comments
0 | Leave a Comment
Browse Our Archives
get the latest from
Godless in Dixie
Sign up for our newsletter
POPULAR AT PATHEOS Nonreligious
1