The Kind of Church that Benefits the World

Christianity has likely never been a single monolithic tradition.  Perhaps even from its outset it has always been more of a family of traditions, and often feuding ones at that.  I think it’s safe to say there are many Christianities, and there always have been.  That’s why it’s impossible to speak about one brand without inciting four others to defend the ways their traditions avoid the flaws of the one I’ve just addressed.  Just comes with the territory.  Religion is an exceedingly subjective enterprise, and a single tradition can reinvent itself so many times over a couple of millennia that, were different epochs to meet, the various groups would scarcely recognize one another.

Evangelical Christianity in particular appears to be undergoing a major overhaul as we speak.  Its churches are hemorrhaging members, and many of them are closing their doors. Those that remain are scrambling to figure out how to rebrand themselves to look more attractive to the groups they are losing. Those reporting growth are doing so primarily through absorbing the members of other churches who have lost their appeal.  I fully expect this challenge to be met with superficial solutions like “Let’s all just get Twitter accounts and make YouTube videos of our Bible studies!  That’ll do it!”  No substantive changes, just a repackaging of the same old dogmas they’ve had for decades, perhaps now with updated language and buzz words.  But some of them genuinely do want to know what it would take to make their church relevant to the world around them, because whatever that tradition becomes a hundred years from now, it will likely look nothing like it does today.  The world is changing too much and too fast for that tradition to maintain its foothold in its surrounding culture.

Sometimes minister friends get around to asking me what kind of church would appeal to the rest of the world.  Of course, many would rend their garments at the question, because that would be letting the world dictate what the church should be.  It doesn’t take long to figure out that such people cannot hear anything you say, anyway.  Even listening to you speak is a threat to their world.  But not everyone is equally closed off.  Some have the sense to realize that if the answers they offer are to questions no one is asking, something needs to change.

WHAT KIND OF CHURCH WOULD ACTUALLY BENEFIT THE WORLD?

In that same spirit, a pastor once asked me what I thought the church’s role in the world would be if it were serving a purpose I could get behind.  As an atheist, I will of course always have an issue with the whole invisible man in the sky bit,* but as a humanist I see plenty of potential for common ground with those churches that actually want to help make the world a better place instead of just trying to get away from it.  I’ve included that clip here (4:46) because I think it encapsulates my feelings about this pretty succinctly.

There’s a dilemma here that’s far from resolved:  It does precious little good to tell a Christian who believes in Hell that such a place is just made up.  He or she is already convinced it’s real, and it’s his or her sworn duty to warn you of your impending doom.  If people are unwilling to consider the possibility that they’ve been sold a bill of goods, there’s really not much left to say. But I think more people than will let on are uncertain of the dogmas they’ve been handed.  For those people, even if I cannot construct a convincing ideological case against their beliefs, I would like to offer a pragmatic suggestion:

Stop trying to convert me.  Stop viewing me like I’m a prospect to be saved and start relating to me like a normal, whole, human being.

If you could manage to drop your mission to save me you just might wind up having a real relationship with me, which can’t hurt, right? Do you suppose that will displease God?  If so, then you’ve got what I would call a dysfunctional view of your heavenly father, anyway.  He’s kind of a jerk.  If he cares that little about you actually taking the time to understand me, treating me like a fully human person instead of like a broken engine that’s missing some parts, then I’ve got no interest in hearing you talk about what you think he wants.  Your “good news” isn’t good at all, so you might as well just quit calling it that.

Does that matter to you?  Does it matter to hear that I am completely closed off to a message of posthumous torture?  The notion is absurd and abhorrent, and I have to fight thinking less of you for defending it.  But even if I have no chance of convincing you otherwise, could you at least accept that I’m telling you I will close the door on you if this is what you’re selling?  I’m not new at this, and neither are most post-Christians like myself.  We’ve heard all of this before, and it no longer sticks.  So unless you want to be speaking your message to an empty room, at some point you’re going to have to rethink your strategy.  Goofus isn’t going to win anybody anymore.  Maybe his message worked back in the day, but it’s not gonna fly anymore.

So from a standpoint of pragmatic strategy, please consider my advice:  Drop the fear tactics, and stop trying to convert the world to be what you are.  If you feel you truly have something to offer the world, you shouldn’t have to strong arm the rest of us into becoming like you.

Nor should you have to schmooze us into your faith by being abnormally nice.  This is the opposite side of the same coercive coin.  It’s almost like a good cop/bad cop routine.  “We’re not like those mean, judgmental churches.  We just wanna love on you.”  (wretch)  Please don’t ever say you’re going to “love on” me.  That sounds super creepy.  It’s an unearned familiarity.  When you gush about how much you love me when we’ve never met, you’re really not making your situation any better.  To illustrate what I mean, here’s a screencap of an interchange that includes both elements I’m advising you to eschew: 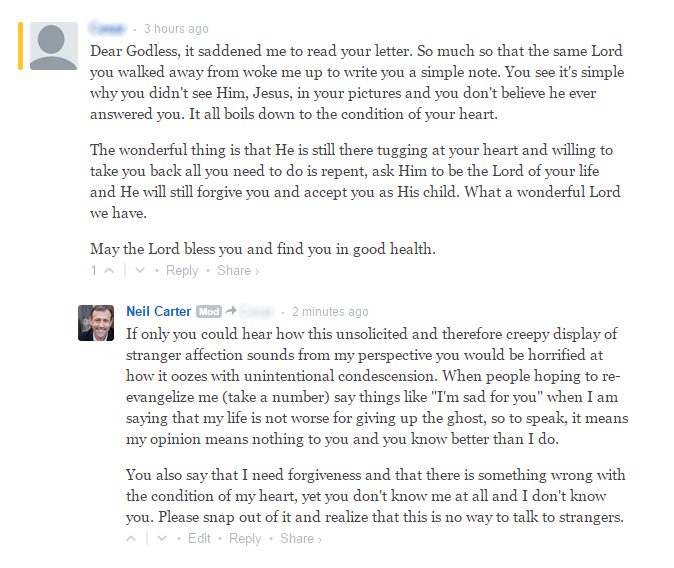 It’s a sign of insular thinking that so many Christians are oblivious to how they sound to the rest of the world.  It would go a long way to just learn to have conversations with us without either strong arming us into a conversion attempt or else burying us under syrupy sweet declarations of stranger love. Just let your light shine, as your book says, and see if that draws people.  If it doesn’t, then maybe it’s not shining as brightly as you thought it does.  Maybe you should reconsider whether or not you’ve got something to offer that the world really needs.

* I used to object to the “invisible man in the sky” quip until I realized it’s not as misrepresentative as it first appears.  Given that Christianity teaches that God is male, and is invisible, and is somehow “above us,” and given that is says Jesus once flew up into the air and disappeared, and now cannot be visibly found, this isn’t really an unfair way to put it, unpalatable though it may be to those who believe it. 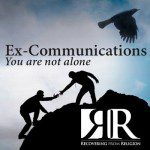 November 15, 2014
New Blog for Apostates on Patheos
Next Post 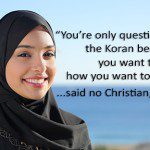