The Motive of the Questioner Is Beside the Point 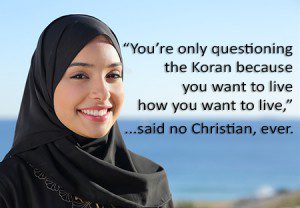 When a system of belief lacks evidential support, it must compensate for this weakness by surrounding itself with defense mechanisms.  These defense mechanisms do nothing to address the flaws themselves, rather they attempt to divert attention away from the vulnerabilities of the system, drawing fire in an alternative direction.  By far the laziest (and therefore the most popular) way to do this is the ad hominem attack, in which you impugn the character of the person making the argument.  Note that this does nothing to address the argument itself—it only serves to change the subject to something easier to defend.

Him:  Your argument is invalid because your heart is wicked and deceitful.

It’s an especially manipulative tactic when you turn to question the motives of the other person, evaluating her by measures which are subjective and therefore impossible to falsify, like values peculiar to your own belief system (the very system under investigation).  This is a logical fallacy, and yet it is a common response to almost any challenge to the Christian faith.

A friend once pointed out that apologetics rarely persuades non-Christians to become Christians.  I agreed, adding that apologetics is primarily for the “saved,” not the “lost.”  It serves to assure the faithful that their beliefs are intellectually respectable, despite the apostle Paul’s insistence to the contrary.  One of my friend’s Christian friends dutifully chimed in, saying:

Did you see what he did there?  True to his training, he moved the discussion away from the rational sphere of falsifiable things to the subjective sphere, where things can be asserted (e.g. “You hate God”) which cannot possibly be falsified because they are asserted without evidence.  And as the late Hitchens famously quipped, “That which can be asserted without evidence can also be dismissed without evidence.”  My friend’s friend deserves credit for discerning the fundamentally subjective nature of the Christian faith, but I still fault grown-ups for being okay with this.  It’s fine when you are six, but not when you are forty-six.  The beliefs of adults should be verifiable apart from what they want to be true, especially if they are going to go around trying to impress them upon others.

DO THEY DO THIS FOR OTHER RELIGIONS?

Now imagine if the situation were changed.  Imagine if a young man began to question the historicity of Joseph Smith’s golden plates, or if a young Muslim questioned the authority of either Muhammad or the Koran.  Would Christian apologists disparage the young man’s motives then?  Would they accuse him of selfishly wanting to be free from the authority of the Koran or the Book of Mormon, or rather would they join him in honestly consulting the facts as we find them?  Would they consider the motivation of the inquisitor an overriding factor in this discussion?  No, they wouldn’t.  Even if they chose at some point to condemn the character of the young man (and I’m confident they will at some point, for they must) they would still see the intellectual questions as separate from the question of motives or character.  They would see the intellectual questions as valid in themselves and address them to the best of their abilities.  When examining the claims of other people’s religions, they can remain objective and just look at the facts.*

So why don’t they do this when someone challenges the Christian faith or the Bible?  Why in those moments do so many of them insist on moving the discussion away from the intellectual sphere toward the very subjective sphere of hidden motives?  It is because, like any organism fighting for its own survival, the Christian belief system must employ an array of defense mechanisms to hide its most vulnerable places from the harsh light of rigorous questioning.

But your motives for asking probing questions is beside the point.  Whenever someone tries to shift the discussion away from the evidence of falsifiable things to the very squishy subject matter of “the human heart,” you can be sure you’ve just struck a nerve, a vulnerability in their belief system.  Don’t fall for that old trick.  It’s a diversionary tactic.

* P.S.  Having interacted with enough hobby apologists, I know that some are quite comfortable with going thirty rounds about the historical reliability of the gospels, which they would present as evidence that they care about evidence.  I’ll grant that in some ways this is better than questioning motives.  But I’ll also point out that they are still shifting discussion away from the here-and-now, which can be rigorously examined, to the way-back-when, which is far harder to examine.  It’s much more difficult to falsify conversations and events between officially unimportant people from two millennia ago than it is to falsify claims of current things, so that’s where the apologist will usually want to go.  Always away from the falsifiable things and toward the unfalsifiable.  It was a significant discovery for me when I realized how many different ways this gets done. 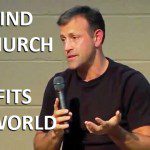 November 16, 2014
The Kind of Church that Benefits the World
Next Post 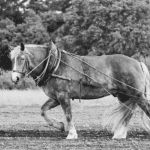